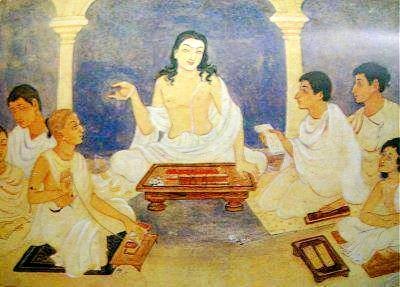 The association of saints is effective in yielding its fruit, even if an individual is without proper awareness, as indicated by Devahūti:

When one associates without intelligence with those gripped in a dream-like existence, that association becomes the cause of material bondage. Yet the very same association, when taken up with the saintly, offers release from bondage. (SB 3.23.55)

"Without intelligence" (adhiyā) means "without awareness." Earlier [in Anuccheda 179] it was condemned to regard great devotees like Nārada as ordinary saints. Here it should be understood that
this applies to those who are not affectionate towards them and who are proud of a poor fund of knowledge.

Sat-saṅga is efficacious even if done unwittingly, i.e., in ignorance of its importance or of a devotee's greatness. It is like taking a powerful medicine without having knowledge of its efficiency: The medicine will still act.

One may raise an objection to this. In Anuccheda 179 it was said that having an improper attitude towards a great devotee impeded one’s ability to shift his or her awareness towards Bhagavān. So how can it be said here that association of the wise is effective even when performed without proper awareness?

We have thus described the result of association with great devotees. We will now describe the result of service to such devotees, as Śrī Vidura said to Maitreya:

By rendering service to great devotees, one becomes immersed in a festival of intense love for the lotus feet of the unchangeable Bhagavān, the destroyer of Madhu, which destroys all calamity. (SB 3.7.19)

Vidura says that by rendering service to great devotees like you [Maitreya], one becomes immersed in a festival of love (rati-rāsaḥ)1 for the feet of the eternal Bhagavān. The adjective "intense" (tīvra) qualifying the .festival of love" highlights that the result attained through service is superior to that attained by mere association.

The verse also describes the concomitant result of such service as "destroying calamity" namely ending one's material existence. For this reason Kṛṣṇa has said, “The worship of My devotee exceeds the worship of Me.” (SB 11.19.21)

In this verse, the prefix abhi added to "exceeds" (adhikā) means that the worship of the devotee is superior in all respects, meaning that it is more pleasing to Kṛṣṇa than even direct service to Him.

Earlier (Anu. 238) it was said that sat-saṅga is of two types, mere association and rendering service. The first of these was discussed in Anucchedas 238 to 243. Here Śrī Jīva Gosvāmī describes the second type of sat-saṅga, which is more potent than the other. The reason for this is that it is much more pleasing to Kṛṣṇa. He considers service to His devotees even more important than service to Himself. This is so because He is completely under the sway of His devotees, as He told to Durvāsā:

O brāhmaṇa, I am under the control of My devotees like a dependant. My heart has been fully captivated by My saintly devotees. I am dear to My devotees. (9.4.63)

It is for this reason that worship of Bhagavān precedes the worship of guru, and Bhagavān is always worshiped along with His consort who is His best devotee.

Without Sat-saṅga Life Is a Waste


One who believes this corpse-like body, which is comprised of the three elements, mucus, bile, and air, to be one’s self; who thinks his wife, children, and others to be his very own; who regards earthen images as objects of worship; or who accepts the water of a river to be a place of pilgrimage, but who never considers the realized souls to be so, is to be considered as an ass among animals. (SB 10.84.13)

Because the body is inert, it is described as resembling a corpse. Although united with consciousness, the body is inherently defective because of being constituted of the three constituent parts—mucus, bile and air. The reference in the verse to earthen images (bhauma) refers to the deity forms of the different celestial gods.

The verse describes a person in whom these four life attitudes [sense of self, of relatedness, of divinity, and of the sacred] do not extend to those who have realized the Absolute.The sense of self (ātma-buddhiḥ) in this context refers to what one considers to be one’s object of greatest affection.

One who does not feel these four types of affection toward the sages is described as go-kharaḥ, “the lowest of cows.” The word go-kharaḥ may also refer to a particular species of wild donkeys found in the lands of Sindhu and Sauvīra [part of Pakistan and Afghanistan], or it may mean a class of mlecchas, or outcastes. It is not known to apply to anyone else. [Only the person who is unable to extend these four life attitudes towards the sages is to be designated as a go-khara, and not the actual gokhara.] This is because although he truly believes himself to be a wise man, he behaves like a fool. The import is that such a person is lower even than the lowest of animals, a wild donkey or an outcaste.

The limitation of the divine to earthen images refers to the worship of ordinary gods, as understood from the verses preceding this one in the same chapter, in which the identical topic is begun. It cannot refer to the worship of the deity forms of Bhagavān Viṣṇu because this would contradict the principle stated in the verse below:

One who faithfully worships Bhagavān Hari only in the form of the deity, but does not render service to Bhagavān’s devotees or to other living beings is a neophyte devotee. (SB 11.2.47)

We also find verses such as this:


Just as by pouring water on the root of a tree, its trunk, branches and twigs become nourished, and just as by supplying food to the life air, the senses gain strength, similarly by worshiping Bhagavān Kṛṣṇa everyone is worshiped. (SB 4.31.14)
[This verse should not be used in support of a neophyte devotee who recognizes the presence of Bhagavān only in the deity form.]

The compound word go-khara is made from the nouns go and khara. Go means a cow and khara means a donkey. Thus gokhara could mean an even worse type of animal, such as a special type of donkey found in Afghanistan. Or it refers to a specific clan of mlecchas, outcastes. The indeclinable eva “only” in this verse signifies that such people really deserve the name gokhara and not any other creature. This is intended as a very strong criticism.

A doubt could be raised here. In the description of three types of devotees, sage Havi said that a person who worships Bhagavān in His deity form only without having proper respect for the devotees is considered to be a neophyte devotee (11.2.47, Anu. 190). But the verse cited here calls such a person a gokhara, i.e., not even a human being.

Although the two verses quoted at the end of the anuccheda both refer to worshipers who fail to recognize the divine in the devotee or sage, the difference lies in the fact that a gokhara does not recognize Bhagavān in His deity form either. He worships only some mundane gods and not Bhagavān Viṣṇu.

Similarly, verse 4.31.14 should not be used to defend the worshiper of the Deity who neglects the sage or advanced devotee. His or her worship of the Deity cannot be compared to pouring water at the root of a tree because worship of the devotee is not separable from that.

§ 175-177ab “When the fourth age, that of strife, comes, there will be a barbarian kingdom (mleccharājya) in the North (of India). When the teacher and disciple of (every) other (tradition) come under the sway of greed and delusion; when the penetration (of the divine) Command has waned and authority is no more; when the Rule (samaya) has been broken and the Command of the teacher is disregarded, I will again bring about (a new) emanation, namely, the fifth incarnation (avatāra).”