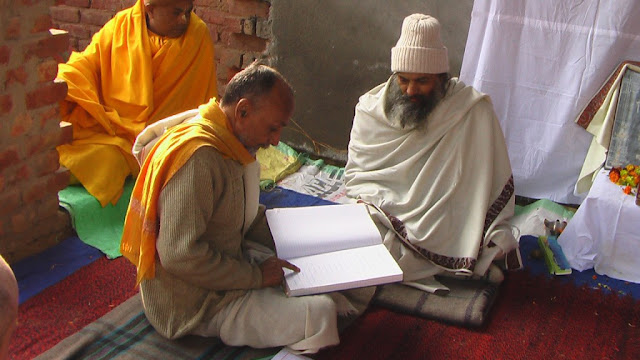 This section (231-233) is about svarūpa-siddhā bhakti. In Anuccheda 217 Śrī Jīva Gosvāmī said that bhakti has three divisions, namely āropa-siddhā, saṅga-siddhā and svarūpa-siddhā. After describing the first two and their three subdivisions, he now begins explaining the third. This bhakti is so by its very nature. It also has three divisions, namely sa-kāmā, kaivalya-kāmā, and niṣkāmā. Sa-kāmā has two divisions of tāmasī and rājasī. The remaining two, kaivalya-kāmā has only one division of sāttvikī, niṣkāmā has two divisions of vaidhī and rāgānugā.

Now we will describe kevalā svarūpa-siddhā bhakti, or action directly constituted of devotion and unmixed with any other process. As with mixed devotion, this may also be performed with an ulterior motive (sa-kāmā) or with a desire for liberation (kaivalya-kāmā). These two forms are recognized by the corresponding qualities that manifest according to the resolve of the worshiper. Out of these two forms, sakāmā is of two types: tāmasī, of the nature of darkness, and rājasī, of the nature of passion.

Direct devotion, prompted by ulterior desire and influenced by darkness, tāmasī, is described in this verse:

A person who is prone to anger, whose vision is fragmented and who uses his feeling for Me with the intent to harm others, to maintain some pretense or to exhibit envy, is influenced by darkness. (SB 3.29.8)

"With the intent" (abhisandhāya) refers to the particular resolve with which one performs an act. Samrambhī means a person who is prone to anger, and “whose vision is separate” (bhinna-dṛk) refers to a person who is concerned only with his or her own happiness and distress and oblivious to the happiness and distress of others, in other words, without compassion for others.

In Anuccheda 217 Śrī Jīva Gosvāmī said that bhakti has three divisions, namely āropa-siddhā, saṅga-siddhā and svarūpa-siddhā. After describing the first two and their three subdivisions, he now begins explaining the third. This bhakti is so by its very nature. It also has three divisions, namely sa-kāmā, kaivalya-kāmā, and niṣkāmā. Sa-kāmā has two divisions of tāmasī and rājasī. The remaining two, kaivalya-kāmā has only one division of sāttvikī, niṣkāmā has two divisions of vaidhī and rāgānugā.

Direct devotion prompted by ulterior desire and influenced by passion is described in this verse:

One who worships Me in My deity form with a resolve to enjoy sense objects, fame or opulence and whose vision is fragmented is influenced by passion. (SB 3.29.9)

The words “whose vision is fragmented” (pṛthag-bhāva) here refer to one whose desire is directed not towards God but towards objects separate from God. This fragmented desire is the cause of the person’s passionate nature.

This verse describes the heart of a person influenced by passion, rajas. Rajas gives one the desire to enjoy material objects, which makescannot feel the presence of Bhagavān. Kṛṣṇa says that the fundamental state of such a person's knowledge is that it is fragmented,

Recognize that the knowledge by which one knows that there are different beings in all the different bodies to be rājasika. (Gītā 18.21)

Direct devotion, prompted by a desire for liberation, is solely of the nature of goodness and illumination (sāttvikī), as described by Bhagavān Kapila:

One who offers his work to the Supreme in order to become free from bondage to karma, or who worships Him because he or she considers it as a duty, but who has separated vision, is influenced by goodness. (SB 3.29.10)

"In order to become free from bondage to karma" (karma-nirhāram uddiśya) means with the goal of attaining liberation. One who either offers his or her karma to the Supreme, i.e., the Supreme Ruler, or one may simply worship Bhagavān with the idea that it is compulsory to do so, being ordained as a regular duty for everyone. Such a person worships Bhagavān but without a true understanding of the principles of devotion. Consequently, like the devotees influenced by darkness and passion, such a devotee’s vision is also fragmented because in this case he or she considers liberation as a goal separate from devotion. Such a person is influenced by the quality of goodness. Even in the case of one who worships Bhagavān out of a sense of duty, as indicated in the second line of the verse, the end achieved is nothing more than freedom from karma.

We also find these statements relative to the sāttvika nature:


A person who acts without attachment for the result is situated in the sattva-guṇa. (SB 11.25.26)

Knowledge directed toward liberation is of the nature of sattva.” (SB 11.25.24)

[These statements indicate that both the means to attain liberation as well as the actual bliss of liberation are of the nature of sattva. The example of sāttvikī bhakti prompted by a desire for liberation is specifically stated in the second half of this verse (SB 3.29.10: “One who worships Me, because he or she considers it as a duty, is influenced by goodness.”).]

In the Gītā Kṛṣṇa says that sattva generates jñāna (14.17). This jñāna is a doorway to Brahman (3.32.23). That implies that one becomes liberated. Jñāna as a product of sattva brings vairāgya. This is not awareness of Bhagavān. To achieve this state either one follows one’s karma without any other motive but as a duty, or performs it to become free from karma. That part of the verse is not to be considered as saṅga-siddhā kaivalya-kāmā sāttvikī bhakti. But the second part of the verse that describes worship as a duty or worship as a means to liberation is called saṅga-siddhā kaivalya-kāmā sāttvikī bhakti.

It is to be noted that in all the three verses cited, Kapila uses the word bhinna-dṛg or pṛthag-bhāva. These expressions imply that the spiritualist does not consider him or herself united with Bhagavān but wants something from Him considering themselves to be independent of Bhagavān. This is the separatist mentality and is the product of ignorance of Bhagavān. This is the fundamental difference between the awareness of a pure devotee, ananya-bhakta and everyone else. The heart of bhakti is not having pṛthag-bhāva but mamatva-bhāva, the mood that Bhagavān is mine. That is the real meaning of sāmmukhya. Therefore, Śrī Jīva said earlier that even awareness of Brahman is not really sāmmukhya. That is why the only abhidheya is bhakti, not jñāna, yoga or karma.