Showing posts from 2017
Show all

Notes from a weekend at Barsana 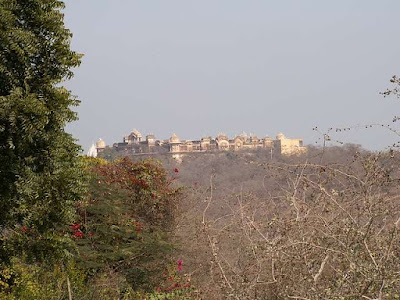 Afternoon class cancelled, so I escaped to Barsana for two days. I love Braj.


Looking out onto Shriji Road, one of the main entry points into Barsana, watching the daily traffic... here the cows and buffalo are not so free range, but always seem to be driven by old turbaned men in dhotis and carrying a long stick. Or an ox cart with an old Brijbasi and his wife, conversing, the only cargo a small pile of cow manure. Crowds of girls going to the school next door, sadhus galore, mostly of the serious looking variety. Less of the type that goes from bhandara to bhandara. The Brijbasi women still keep their ghumta here, and the more modern ones have to have a strong sense of defiance. And there are religious tourists, not much of the other kind.

The Barsana Ladiliji temple is magic. I was walking on my way to Priya Kund and there is one spot where one gets a particularly good view of it. It is the jewel in the lotus of Braj.

December 24, 2017
Vinode Vani, who is one of my new pupils at Jiva Institute Sanskrit, asked me to answer some general questions about my method and objectives. So I thought I would share what I wrote here.

My earliest idea was not very ambitious at all. I started teaching and developing the course and method while in Rishikesh, but the yoga students there were less interested in pursuing Sanskrit. This is not so unusual as I have found very few foreign devotees to think that it is at all necessary. After all, it is well nigh impossible for foreigners to develop the kind of fluency in Sanskrit that comes from being born in a living, breathing cultural environment.

For me personally, Sanskrit began as an inexplicable attraction, based probably on hearing Prabhupada chant shlokas like the Shikshashtakam or Shadgosvamyashtakam or Gurvashtakam, etc. So I assume that there will be some few people who will have that inclination and it is important to give them facility. Love of Sanskrit will be helpful to d…
2 comments
Read more

Can you just concoct stories about God and the Dham and present them as fact?

December 02, 2017
It has been a couple of months since I posted on the blog. I was not inactive. In Karttik I was making a big effort to enhance the Vrindavan Today website, concentrating on writing articles related to understanding the Dham as a "final step" in rāgānugā sādhana. I was conducting a daily meditation on the Vrindavan Mahimamrita (VMA) of Prabodhananda Saraswati. This work is no doubt the result of living in Vrindavan and experiencing its spiritual power. In particular, after returning from Bengal, the first time I had been away from Braj in two years, I could feel the effects of the Dham very intensely.

I think that perhaps I will cross post the VMA articles series, either here or on an independent site, but we will see. At any rate, for the time being, people can read those articles on the VT website.

A reader of this site recently wrote to me and asked the following:
Namaskar. Throughout your writings you teach reality over hagiography. Recently, you have written that (mater…
36 comments
Read more

September 25, 2017
Facebook regurgitated a memory, a status I had posted three years ago.

Even if you wonder, "Why can't I remember Radha! Why isn't Bihariji merciful to me? Isn't the Dham supposed to make bhajan easier?" You are still doing bhajan by even asking the question.

Slowly but surely you will see your bhajan bear fruit in the Dham. It will begin when your tongue chants the name…
21 comments
Read more

September 22, 2017
I have to admit that Trump is a real phenomenon. His presidency is reality TV. Really.

He really could blow up the whole world!!! Will he? What is he doing? God help us all... The sickening drama... this is happening to us!! This is not TV, this is reality!

He creates his character: Is he mad? Is he a fool? Is he a Nazi? What exact _kind_ of mental illness is he suffering from? Oh my God! Has a madman taken over the nuclear codes?!!??!!

It is really the most astonishing thing I have ever seen.

He takes away all pretense of following the protocols that diplomatic powerful world leaders are supposed to do and say; he does the opposite. And it is riveting. It is truly the Truman show come to life in a way that no matter where you are in the political spectrum, everyone is in a Matrix, a …
13 comments
Read more

Those without eyes will see

Makes me wonder if she read the same BG where Krishna instructs Arjuna to not be a coward and fight: "She said that the Gita impressed upon her that, “The path to the truth is non-violent and no one should insult anyone else.”
My thought:

Well, if you think about it a couple of steps of logic down, you could make a case. That is not a problem.

On the other hand, you could ask whether it is appropriate to deduce that the Gita was about getting along and letting each other live. To which I say a good message found in a nasty place is still a good message.

She could have said, "Right, Krishna is like fighting a stupid religious war. So Hindus and Muslims should kill each other like our good lords intended, right?"

That would also have been a rational message, perhaps a little more prosaic. A little more external an understanding of the Bhagavad Gita.

My faith is that the Gita is a spiritual book, set in a particular cultural envi…
6 comments
Read more

What does it mean to be a Brajbasi? Part II : Revealing Braja’s true form through faith and service

Prabodhananda Saraswati is the ācārya for Braja-vāsa-sādhana, i.e., the devotional practice of living in the Dham. Sometimes people find it difficult to understand his niṣṭhā and his vision of the Dham, which sometimes seems at odds with logic. Indeed, the "city of love" (Prema-pattanam) is full of contradictions. For those who believe that Vrindavan is everywhere and there is no need to think that a particular geographical location has any special characteristic, Prabodhananda says:

I would rather reside even as …
4 comments
Read more

Glorifying Vrindavan: Where those thirsty for Braj rasa are going these days 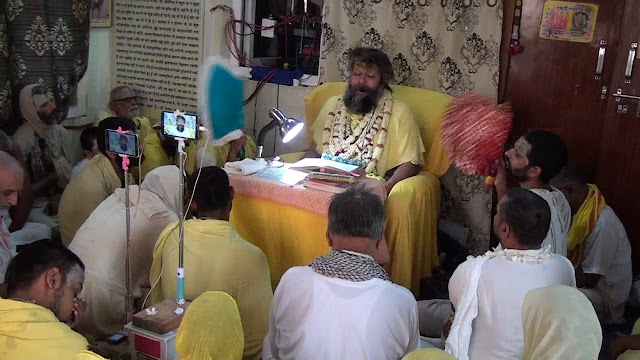 From Vrindavan Today: Sometimes one gets the impression that there is a certain movement afoot. Suddenly, one figure bursts into prominence and influences the general mood of the community, sets the rhythm that others follow. When the flowers bloom and their fragrance is carried by the breezes in the spring, the bees and hummingbirds who feed on the nectar automatically swarm to the colorful garden where they are arrayed.

For the past few months people have been asking me with regularity, "Have you heard Premananda Baba's Vrindavana-mahimamrita lectures? Then I started looking on the internet and saw that his enthusiasts were making his lectures available every day, so I began listening.

And today, finally, I went to Shri Hit Dham on the Parikrama Marg, in the Varaha Ghat area a bit west of the Bhaktivedanta Goshala. Vishakha Dasi accompanied me and took some photos, which you can see here: Gallery.

Rasa in the sadhaka deha and the siddha deha. 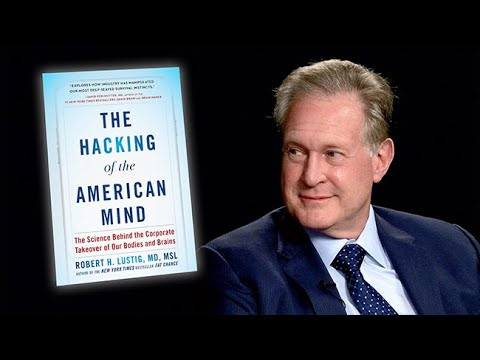 
I think prema-sukha is happiness AND pleasure.
It is pleasure experienced as waves in the ocean of happiness.

This thought was provoked by the sheer impossibility
of tasting ALL of the rasa that is present in so many writings
of so many rasika mahatmas
of so many sampradayas,
and knowing that I have to stick to ONE to get it.
That I have to concentrate on ONE toenail or whatever,
one sentence of one book.
That is when the rasa hits. Not otherwise.

The key to the door goes through one keyhole.

And yet, the thirst
-- the thirst of one with cholera --
to drink it all,
even in the frustration of knowing it is imposs…
12 comments
Read more

What does it mean to be a Brajbasi? The eternal glory of residence in the Dham 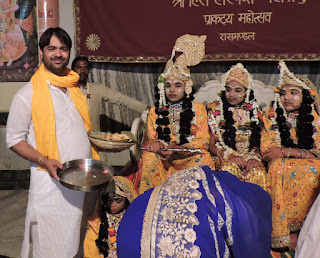 While in Barsana recently, I was standing in the Ladli temple on the outside terrace portion and someone appeared to have fainted. An elderly Brijbasi Gosai, with a bushy white moustache, a colorful turban and yellow silk dhoti, a stick in his hand, was walking toward me. For some reason I was impelled to say something stupid and started to speak, but my Hindi tongue was tied and could not express, "We must all pass by that."

At the Brajvasi's insistence I repeated myself again without success and ended up stuttering out the words andham tamah, "the darkness of ignorance." Which I knew the instant they came out of my mouth that they did not fit at all what I really wanted to say, pointless as it was.

The Gusai responded vehemently in a tone of chastisement, but even singing a Brijbhasha song, glorifying Braj Dham as sat-cit-ananda, and how nothing that happens here can ever be andham tamah. I stood there with my head down loo…
7 comments
Read more

When will that day be mine?

Three and a half months in Birnagar has come to a sudden and very abrupt change of Dham. I am feeling the intoxication of Vrindavan.

When Bhakta Das and I were about to get off the train in Mathura -- he goes to Radha Kund, I to Vrindavan -- he said that he felt it would be lonely going to his cottage in Gaura Dham Colony. He has been relishing the kind of respect and sense of community and purpose that he gets at Dwadash Mandir.

I also felt something like that on arriving here. There we fulfill a role in the service of our Guru, which makes us automatically seen as special, through our relation, through our connection. Here we are specks of dust, luminous neverth…
7 comments
Read more

5. My day of fasting

that, for me, is a day of fasting.

The day that my tongue does not relish, does not touch
the delectable syllables of the Holy Name,
the day that I do not experience the joy of kirtan,
cheated by my desire to enjoy sensual pleasures--

my life turns into a joke;

that, for me, is a day of fasting.

September 15, 2017
I don't know much about Gopinath Bosak except that he was a householder disciple of Pran Gopal Goswami (d. 1941) who himself probably left his body in around 1980 or thereabouts. He was a great Vaishnava who wrote many poems, his Bengali versification of Vishwanath's Kṛṣṇa-bhāvanāmṛta being the most widely known and relished. I saved the following from a collection of his poems, choosing ones that I particularly liked. I have long since lost that book. I published an earlier version of these poems on Gaudiya Discussions many a moon ago, but never posted them here. So here they are now.


1. Seven spears in the heart