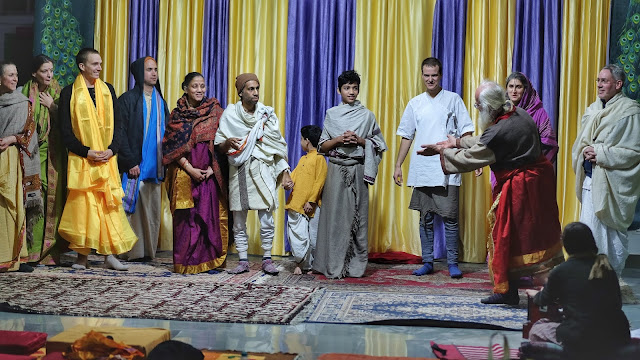 Ooof! I wanted to write something about Karttik and how it is starting. Since I got to Vrindavan I have been kind of holed up in Bhakti Sandarbha land. But I must say that I have been doing a little bhakti as well (he insisted).

Well, that is actually one thing I really like about Braja Bhajan. It is that you can lie around and do pretty much nothing and still not feel you have to feel guilty because after all you are in Braj, where just lying around doing nothing is bhakti. Can't really do that anywhere else, you know. Well, there is always residue guilt for someone like me.

I was talking with Madhavendra Puri on Ekadasi and discussing what we were doing for Karttik. Neither of us had ambitious plans, just kind of "I am going to get more into what I am already into."

But I do feel that the old guilts need to be tended to. So I am truly getting serious about completing some 99%-complete projects that have been awaiting finishing touches for eternities. I am feeling the publish or perish perfidy. If not true death, then the poisons of unfulfilled promises will kill me the slow death of shame... Alas!!

The other thing coming up is the Jiva Tirtha course which starts in a couple of days. We have twelve confirmed full-time students this year, six of them are Sanskrit beginners.

So if there is anyone living in or around Vrindavan for the next six months, this might be a good opportunity to join our company and get a start with Sanskrit.

Go on, fulfill a long-cherished desire...

Remember: My days are numbered for this kind of thing. I ain't going to do this forever.

There is no cost for attendees, except for materials.

In the afternoons at 5.30 I will be holding a reading class in Brihad Bhagavatamritam.

Anyone who has a rudimentary knowledge of Sanskrit will be able to participate without difficulty. Attendees should have a copy of the Brihad Bhagavatamrita with Sanatan Goswami's commentary. These should be available in Devanagari at Khnadelwal's or at Rupa-Sanatan Gaudiya Math, OR you can get it in Bengali script in Radha Kund. I am looking forward to finally getting the fruit of having students who can follow such a course and that makes me very happy.

Anyway, from the bhakti side of things, I will be doing a little more direct activity with my Thakur. At least by offering an arati and kirtan on a regular daily basis. Once a day, in the evening. I will follow a regular kirtan program including the Damodarashtakam for the entire month.

OK, so it seems I am doing the vrata thing. I am not very good at vratas, but I don't think I am being overly ambitious. And of course it is never a good idea to be too public with one's plans.

Since coming to Vrindavan, my schedule has been extremely erratic. But when I really decided that I had to get serious about the Bhakti Sandarbha I just put that work at the center of everything. I try not to let the inevitable tamas get too strong, but when I have to settle in and get something done, then I often become more of a hermit and neglectful of almost everything else.

Chanting japa and doing kirtan are of course as necessary for me as eating, but to add to that I will be regularly reading Radha Rasa Sucha Nidhi, the last verses of which are about Vrindavan. I am reciting the verses and then reading from the commentaries by Ananta Dasji and maybe I will look at some others. For the moment though, I am just trying to relish Pandit Baba's insights into the spirit of Prabodhananda Saraswati and the Goswamis.

So that is about as ambitious as I am going to get. The trick is to keep it simple and make it just more of the same what you are already doing, just trying to push it forward a little more.

So I am off to do all that right now. Good night. Jai Sri Radhe.

Parikshit said…
Babaji, I'm as well a student of you who receives education through these blogs. Resonates a bit with an Eklavya kind of thing.
Thursday, 10 October, 2019