Showing posts from December, 2009
Show all

December 27, 2009
On Dec. 25, a few hundred persons, mostly from Vrindavan’s religious community, including many foreigners from several maths and ashrams, gathered at Vrindavan’s Keshi Ghat to protest the building of a bridge.

This bridge, which loops around the ancient redstone ghat, will permit car traffic to make the full tour of Vrindavan, turning the Parikrama Marg into a Ring Road.

Even ten years ago, the Parikrama Marg was still mostly a sandy trail that circled the hallowed central portion of Vrindavan, the site of so many temples—Banke Bihari, Radha Vallabh, Radha Damodar, Govindaji.

Hundreds of barefoot pilgrims from dawn to dusk quietly followed the 14 kilometer trail, reciting their japa or singing God’s names, or simply walking in meditative silence. Some even covered the length lying prostrate on the ground.

But the success of many Vaishnava preachers, Bhagavata pathaks and bhajan singers has drawn a steadily increasing flow of the faithful from around the world and, more to the point, from …
10 comments
Read more

Raganuga Bhakti and the Yamuna Bridge to Nowhere 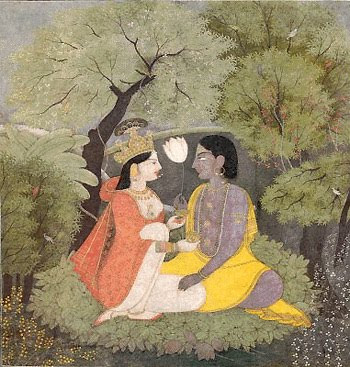 Vrinda-van "itself" is nowadays already a forest of buildings.... Vrinda-van is in reality a magical forest, one can get into ONLY by the magic of raganuga sadhan. This is where I want to get.

If somebody would have so much punya, to get from Krishna the blessing to turn the forest of buildings into the forest of Vrinda, with all the wonderful trees, latas, flowers, birds and animals, then Krishna will be forced to do it....

We may sit under a tree, overwhelmed by those uddipanas and... as Gaura in the form of Sri Caitanya taught, we may go through the magic of raganuga sadhan, far from the any other thoughts in the lila.

"The villagers" don't live in that forest, Vrinda-van, but in a village, which is outside of it. That Vrinda-van was lost long ago and what comes after its demise is just a natural consequence.
This is an interesting comment and is quite often heard. And really, it hits at the very root of the problem in mor…
Post a Comment
Read more

Also we have to consider that some of that uncleanliness was brought by outsiders too, we are part of the problem, so let's resolve it......
This is something that several people have already mentioned. There is nothing surprising and I have already spoken about it to some extent in one of my earlier posts.

The thing is that money spent on cleaning, etc., is generally considered to be a loss on the books. You cannot see any income being generated by cleaning your own toilet, for instance.

For the most part, Vrindavan has happily let NGOs like "Friends of Vrindavan" etc., try to do the work in this area, or planting trees or whatever. They may make one-off gifts of money, but they are not serious, longterm, diligent efforts.

In fact, you cannot depend on the private sector to do these things; they are public sector tasks. But India is living the libertarian dream of entrepreneurial anarchy. Money that can be spent on construction, etc., means liberal …
2 comments
Read more

The Language of Aparadha and Demonization

December 26, 2009
The first calls to blow up the Yamuna "Half-Moon" Bridge have already come out. It made me realize that the picture used on that poster was a total mistake. The language of "aparadha" that was used there and in the current discourse is not really the right way to approach publicizing this issue.

Most people do not understand what offenses are, and they have little or no idea of the sacred or why Vrindavan and the Yamuna are sacred. We do not really want to associate the preservation of Vrindavan's sacred heritage with militant Hindu nationalism and the kinds of things that happened in the Babri Masjid fiasco.

To characterize the people involved in making the bridge as demons is also wrongheaded. That makes it into a demons-demigods fight, which is not what it is. Always attribute the best motivations to your enemy: they are thinking of the development of this bridge as a way of improving the lives of the Brajavasis by increasing the flow of tourist traffic …
Post a Comment
Read more

More Ranting about the Sitch 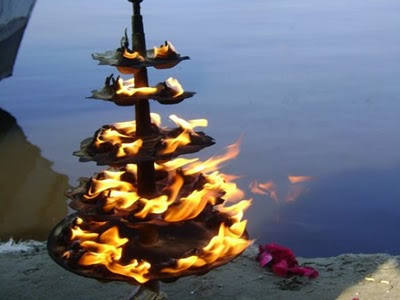 I created a Facebook group Stop the Yamuna Bridge this morning after getting a little riled up by this latest slap in the face to those who love the Dham. Advaitaji wrote me, making the same general point that Osho did in the comments to my previous post. So I just continue my general rant here.

Advaita:
Jagat, I became member of your club but I must make a note here that some individuals and big institutions that participate in the protests are themselves very guilty of destroying the environment of Vraja elsewhere with posh ashrams and temples and guest houses. The protests may be hijacked by such orgs that want to just lobby for more followers in this way...
First of all, let me say that this is not my "club." I just set up this Facebook group in the hope that it would be useful for communication. If the people interested in this issue make use of it, it might make developments and actions more widely known and make it possible for more people to be mobilized for demonstr…
Post a Comment
Read more 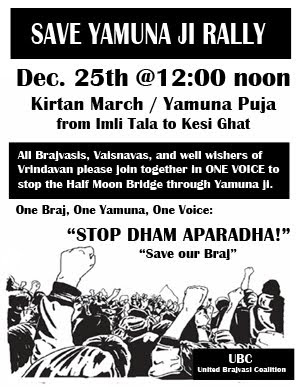 I just found about this event, which takes place today, in only an hour's time. Unfortunately, though right minded, it sounds to me like too little too late. Millions have already been invested by business and government interests in this project and I doubt that a few idealistic lovers of Vrindavan will be able to do much at this late date. I have heard that construction has already begun. I already wrote about this back in 2005, so everyone has known about it for at least four years. But the idea in India right now, the Zeitgeist, is that development, development, development will solve all problems.

The same thing is going on in Rishikesh, but perhaps not quite to the same extent--partly because of the protection that has been extended to the northern side of the Ganges, but the south side is an ever increasing mess.

The sad truth is that the very qualities of the Dham that make it attractive are being destroyed by virtue of so many people being attracted. A victim of its own su…
9 comments
Read more

The Hope for Vrindavan and Prema

December 08, 2009
I have been working for some time on Harilal Vyasa’s monumental commentary to Rādhā-rasa-sudhā-nidhi. About 170 verses of the 270 total have been completed. There will be two files in all cut exactly in half. Apparently Vyasa took a four year hiatus before doing the second half of the work. One feature that is more noticeable in the second half is the addition of many more verses from Vṛndāvana-mahimāmṛta.

O Queen of Vrindavan, please grant me residence in glorious Vrindavan. And if you do …
1 comment
Read more
More posts