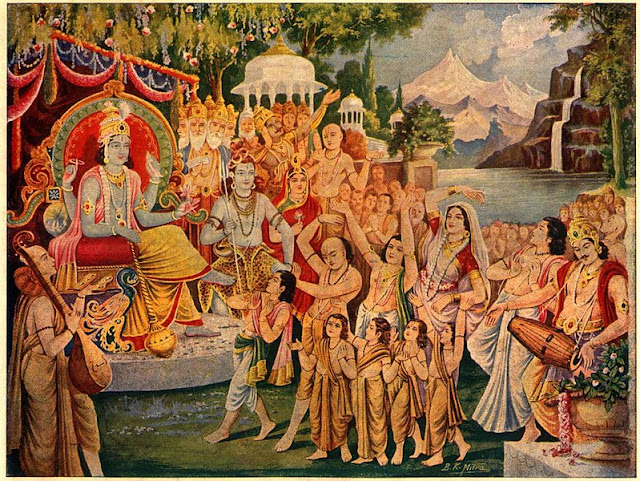 Devotion performed with the desire for liberation is called kaivalya-kāmā bhakti.

Now we will describe kaivalya-kāmā, devotion performed with a desire for liberation. Sometimes this form of devotion is mixed with karma and jñāna together and sometimes with jñāna alone. The word jñāna here refers to non-dual awareness, as defined earlier: “Jñāna means o see only one underlying reality.” (SB 11.19.27, See Anu. 214.) Because activities such as hearing the truths concerning non-dual awareness, renunciation, yoga and sāṅkhya are all parts of jñāna, they are all included in it.

Devotion mixed with both karma and jñāna is described by Kapiladeva:

My dear mother! Just as the araṇi wood, the source of fire, is consumed by the very fire it produces, the material identity of the individual is burnt day and night and gradually disappears through performing one's own duty with the goal of having no goal, thereby having a purified heart, by intense devotion nourished by hearing about Me for a long time, by knowledge based on experience of the Absolute, by acute renunciation, by yoga practice coupled with penance, by deep absorption in the trance of non-dual awareness. (SB 3.27.21-23)

"With the goal of having no goal" (animitta-nimittena): "goal" (nimitta) means result, and "with the goal" means prompting. [Prescribed action that is not prompted by the desire for fruits] purifies the self or mind, meaning that it is free of desires. The "knowledge" spoken of here means that acquired from scripture. "The practice of yoga" refers to meditation on the individual and the Supreme Self. That [yoga is synonymous with meditation] is stated in the Amarakoṣa lexicon: “The words yoga, preparation, methodology, meditation, union, and logic are all synonyms.” The state of meditation in which all distinction between the witness and the witnessed disappears is known as samādhi, or trance.

In Śrīmad-Bhāgavatam it is said: “Worship of Bhagavān’s feet is the source of all perfection.” (SB 10.81.19) So according to this statement, bhakti is the whole of which other methods are but parts. Yet in the group of three verses quoted above, bhakti is mentioned merely as one part of the practice aiming at liberation. This is so because the practitioners of this type of mixed devotion regard bhakti in the same manner as any other method. Therefore, the result they attain through their practice is limited to liberation.

The second type of saṅga-siddhā bhakti is kaivalya-kāmā or bhakti done with the intention of attaining liberation, mukti. Mukti is the goal of jñāna. Although one can also attain mukti by bhakti alone, people who are fascinated by jñāna-mārga consider bhakti inferior to jñāna. Thus they do not give due importance to bhakti and use it as an assisting means on the path of jñāna. If they come from the path of karma and are attached to it, then they may also continue following some parts of the karma mārga. Thus there are two type of kaivalya-kāmā bhakti, one mixed only with jñāna, and the other mixed with both karma and jñāna. Here Śrī Jīva gives an example for the second.

Śrī Jīva Gosvāmī comments that whether bhakti is primary or secondary depends upon the mind-set of the sādhaka. The jñāna-mārga followers consider bhakti to be secondary to jñāna. Therefore, bhakti does not yield its highest fruit of prema to such practitioners. In these verses the word yoga and the distinction between prakṛti and puruṣa (sāṅkhya) are all being used as synonyms for jñāna.

Here fire is given as the example of that which burns its source. Similarly, non-dual awareness arises from the subtle body but then burns it. Mukti happens when the jñānī dissociates himself from both the gross and subtle bodies and becomes situated in the self (SB 2.10.6).

Devotion mixed with jñāna alone is expressed in these words of Bhagavān Kṛṣṇa:

Residing in a secluded and peaceful place and being pure of mind through awareness of Me, the sage should meditate on the one self as non-different from Me. (SB 11.18.21)

Bhakti mixed with jñāna motivated by the desire for liberation is the second division of kaivalya-kāmā bhakti. In this verse the phrase mad-bhāva, “conscious of Me” is the bhakti part, and the rest of the activities are part of jñāna.

अनिमित्त (a-nimitta) “having no adequate occasion, causeless, groundless; absence of an adequate cause or occasion, groundlessness”:

One has described the measure previously, here is the post reproduced:

Kāmarūpaka (the Cavity of Brahmā), Ucchuṣma, the secret seat, the secret couple, the Siddha and the Gesture (guhyamudrā)

I will (now) explain the secret couple (guptayugma), united in order to (fulfil their) passion (kāma). O fair-hipped one, (this is) the sacred seat (called) Ucchuṣma (Kāmarūpa – the Cavity of Brahmā). The Śāvarī of the Śāvara (here) is the goddess Koṅkaṇā by name who has come forth from Koṅkaṇā. (151cd-153ab)

And in the same way, the accomplished yogi (who resides here) is called Mitradeva (the name the goddess gives to the god when she transmits the command to him). Know that the gesture of the Yoni (yonimudrā) is located at the uppermost summit (अग्र ágra) held in the Yoni of the Circle of the (eight) Mothers (mātṛmaṇḍala). (153cd-154ab)

In order to enter Kāmarūpa (the residence of the upper, raised Kuṇḍalinī) the (energy of the) vital breath must penetrate through the cavity of Brahmā. This is done by raising Kuṇḍalinī by means of the gesture of the yoni (yonimudrā), which in its highest form is Kuṇḍalinī in the centre of the wheel of the eight mothers in Kāmarūpa.

The Gesture of the Yoni is progressively formed by the rise of Kuṇḍalinī through the Yoga of the Measure along the path of Brahmā (i.e. the Suṣumnā). Rising up transcendent and descending again into the body repeatedly, the yogi experiences the bliss of the inner dynamism of Kuṇḍalinī, the energy of the vital breath, by means of the gesture of the Yoni.

The KuKauM describes this process in its own cryptic way as follows:

The greatest forest of lotuses here is said to be the seat of yoga (yogapiīṭha). The form of a Kadamba bud, it is Divine Passion (kāma) whose form is the point (bindu) in the cavity of Brahmā.

If (the yogi) touches the extremity of the breath that is said to be the opening (udghāta) (of the Cavity of Brahmā). He who practices in this way every day with determination, is freed from all the fetters, namely, the streams of suffering, death and old age. The four-fold emanation takes place within this Yoni. It again dissolves into it beginning with the Fire of Time and ending with Śiva (see KuKh 2/40-41). This is the initial Gesture of the Yoni.

The Gesture of the Yoni is progressively formed by the rise of Kuṇḍalinī through the Yoga of the Measure along the path of Brahmā (i.e. the Suṣumnā).

Reconstruction of Proto-Indo-European (s)kelH- “to cut, to split, to separate”: