Showing posts from October, 2009
Show all

Since I posted my introductory articles on Dāna-keli-kaumudī in a somewhat haphazard fashion, I thought I would just present a list of those articles in the order they were intended to be read. Some of these are dated back to September, so you may have missed them.

There may be a bit of crossover or lack of proper sequencing of ideas in the different posts, since they were all being written more or less simultaneously, so no doubt further editing will be necessary, but I probably won't do that work on line.

(1) Folk and Classical Elements in Dāna-keli-kaumudī. This introductory article is meant to highlight how Rupa Goswami's writings are the synthesis of folk and classical traditions, mediated by the Bhāgavata-purāṇa.

(2) A summary of the contents of Dāna-keli-kaumudī.. This structural analysis of the DKK is an attempt to isolate the classicizing portions, or at least to see what original contributions Rupa was making in his approach to the dāna-līlā.

The Changing of the Gods

In an earlier post, Bankim Chandra and Sri Krishna Charitra, I started a discussion on a rather good book on Bankim by Sudipta Kaviraj, The Unhappy Consciousness. Kaviraj is a historian and political scientist who teaches and writes mostly on Indian and Bengali politics. He is an excellent writer--dense in ideas and insight, and eloquent in expression. I hardly expect to do justice to his work and will have to be selective in what I quote and what I discuss.

Kaviraj's primary interest is understandably Bankim Chandra's political thinking, but since Bankim was not actually a political actor, but a novelist and essayist, Kaviraj has done a great deal of thinking about literary theory, both Western and Eastern, in order to better understand his subject. The main theme is Bankim's imagining of history in the name of creating a vision of India.

What is primarily interesting to me, and us, in all likelihood, dear readers, is Bankim's reshaping of the character of Krishna. W…
13 comments
Read more 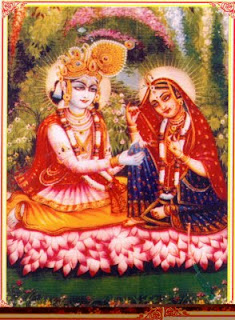 I don’t think we can look at the vibhur api verse (DKK 2) without being subliminally reminded of a similar one from Govinda-līlāmṛta, also quoted in Caitanya-caritāmṛta. This verse, in the same meter and beginning with the same word, was almost surely written with the earlier one in mind. It should be noted that like many other classic poets, Kaviraj Goswami has done this in other cases. Compare, for example, GLA 10.14 to Kāvya-prakāśa 5.128. And Rupa Goswami’s own pastiches of classical verses, such as the priyaḥ so’yaṁ kṛṣṇaḥ verse (CC 2.1.76, Padyāvali 383), are well known. In such cases, it is always an intriguing exercise to treat the latter verse as a commentary on the former.

There has been movement both ways: Just as there were Goswamis and Babajis who went to the Gaudiya Math, they have come to Iskcon also. At the same time, there have been people going from Iskcon to various GMs, and from both to other Vaishnava groups.

svajātīyāśaye snigdhe sādhau saṅge svato vare. You have to feel that you are getting saintly association with whom you share the same spiritual goals, where you find affection and which is preferably conducive to advancement. In other words, on a higher level than yourself.

I left Iskcon primarily for both the first and third reasons... not because I was too proud of myself, as some people thought, but because I felt that no one there in 1979 had anything particularly useful to teach me about bhakti and this tradition. I was just remembering yesterday, when I went to the Iskcon temple to celebrate Rasa and the beginning of Urja-vrata, how on two occasions, shortly before leaving Iskcon, I had …
7 comments
Read more

I have probably posted these verses somewhere before, but I don't know where, so I am just giving them again. These verses are found in Padyāvali, but the fact that most of them can be found in Sad-ukti-karṇāmṛtam shows that they date back to at least the 12th century.

Sage under tree/Sage in the heavens 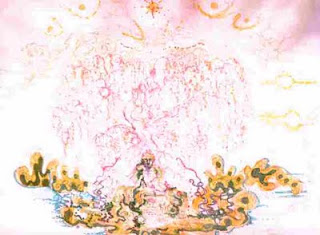 I painted these water colors in the summer of 1970, shortly before I became a devotee. There were more in the series, but I have only these two left. They were not thought out, but the product of an inner impulse, depicting the voyage of a seeker towards heaven. The sage riding a hammer-carrying horse into the sky. No idea what it meant, but the feeling of excitement, that I was headed into a glorious, colorful realm, was overpowering.

The immediately previous picture in the series was one of the sage walking on a path along a mountain value towards a fairy castle. In this last one, he is looking down at the mountains. I think the horse represents grace.

The color has unfortunately almost completely faded, and at different speeds, too.

The majority of seeds in nature die as seeds, and in human life, all natural men, all the timid, all the stupid and all the evil, remain in the starlit cavern of the fallen mind, hibernating in the dormant winter night of time. They are embryos of life onl…
4 comments
Read more 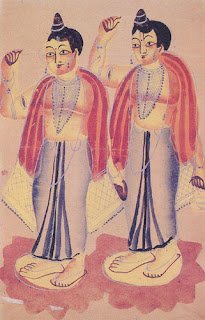 We have become rather accustomed to seeing much quibbling about who genuinely represents Chaitanya Mahaprabhu. There are many points of contention, but the great symbolic distinction is found in the differing concepts of disciplic succession.

It is my personal feeling that human experience is multi-faceted. Different historical situations give rise to different interpretations; different contexts to different responses. Is it not then possible that there is more than one way of looking at Chaitanya Vaishnavism? Furthermore, will not a more complete and nuanced view of Gaudiya Vaishnava history and doctrine not make those who hold Chaitanya Mahaprabhu dear more capable of adjusting to circumstances as they change?

Gaudiya Vaishnavism evolved over 350 years after the disappearance of Chaitanya Mahaprabhu. As with every human phenomenon, it was born, grew and developed in response to the social situation in which it found itself. Without …
6 comments
Read more

I have been reading a very interesting book, The Unhappy Consciousness by Sudipta Kaviraj, an Indian political historian from Bengal.(Delhi: Oxford University Press, 1995). In fact, I have only been reading and rereading the book's third chapter which is called "The Myth of Praxis: Construction of the Figure of Krishna in the Krishna-charitra."

Now I know that I have mentioned Bankim Chandra and his reevaluation of Krishna's life before. Bankim was Bhaktivinoda Thakur's slightly younger contemporary and though he became far more influential in India than the Thakur, they shared one common interest: the direction of religion in Bengal and India and Krishna's place in it. Bhaktivinoda wrote Krishna-samhita in 1880 and Bankim wrote Krishna-charitra in 1886. It is hard to imagine that there was not some common link between these two books, though again, Bankim's influence was more widespread, with Aurobindo and Vivekananda being at least two major figures who …
4 comments
Read more
More posts