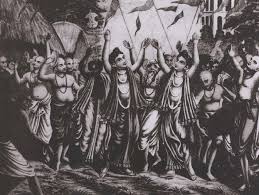 The subject of kirtan is underway and will continue until Anu. 274. The kirtan of the Holy Namw will finish in Anu. 265, which discusses the offenses to the Holy Name.


The Primary Result of Chanting the Name is Love

The primary result of chanting the names of Bhagavān is expressed by the sage Kavi to King Nimi:

The devotee, in this manner resolved to these devotional acts, is endowed with love for Bhagavān by singing His beloved names. His heart thus melts and like a madman, he loudly laughs, weeps, screams, sings and dances, in complete disregard of public opinion and social conventions. (SB 11.2.40)

“In this manner” (evam) used in connection with the word "resolve" (vrataḥ) renders the following sense, “one who has adopted such a vow” referring to singing the Holy Name as described in the previous verse:


Hearing of the auspicious births and activities of Bhagavān Hari, the wielder of the disc, and singing names that denote His birth and activities which are famous throughout the world, one should move through life free from attachment and inhibition. (SB 11.2.39)

Follow that alone does the devotee's heart melt, and this then gives rise to a variety of different corresponding emotions, exhibited externally in the form of laughter, tears and so on. In this verse the instrumental case is used for singing the names of Bhagavān (kīrtyā), which suggests that this singing of Bhagavān’s names is the direct cause of love. So although there are many different methods for evoking love, the causality implied by the instrumental case indicates that singing the names of Bhagavān is pre-eminent among all methods. The adverbial particle api (“even”) is to be adduced along with the words evaṁ-vrataḥ, thus giving this sense, “Even one whose conduct is so described.”

Thus, in order to draw out the significance of this verse, Śrīdhara Svāmī offers the following words as an introduction to his commentary on the next verse (SB 11.2.42): “A doubt may be raised in this connection. The state described in the previous verse is rarely achieved even by those who have attained perfection in yoga, and even after many births of practice, so how can this state be attained in one birth merely by chanting the names of Bhagavān? Anticipating such a question, the sage responds with an example.” Here is the verse referred to in the above comment:


Just as a hungry person experiences satisfaction, nourishment and relief from hunger with every morsel of food he or she consumes; so to a person who has fully taken shelter of Bhagavān, devotion, realization of Bhagavān and detachment from things not related to devotion all appear at once. (SB 11.2.42)

A similar statement from another Purāṇa is cited in Bhagavan-nāma-kaumudī and in Śaṅkara’s commentary on the Sahasra-nāma:


If one cannot fix one's mind on Bhagavān Acyuta even after overcoming fear, both during the day and at night, having conquered sleep, alone, disinterest in material life, having a vision of his own spiritual path, eating frugally, and being fully peaceful in mind, then without inhibition one should loudly utter the names of Bhagavān, which awaken love for Him.

The qualities mentioned in this verse, such as being free from fear, are meant to assist the practitioner in developing single-minded absorption in the name—they are not component parts of the practice of kīrtana. Since bhakti is independent of any other requirement, the practice of singing the glories of Bhagavān is certainly free of prerequisites. This is evident from the conversation in the Viṣṇu-dharmottara Purāṇa between a brāhmaṇa with a fallen kṣatriya who had committed the sins known as sarva-pātaka, ati-pātaka and mahā-pātaka:


The brāhmaṇa said: “If you are unable to carry out all that I have told you, let me know. I will give you something less demanding if you think yourself able to follow it.”


Kṣatrabandhu said: “Because my mind is unstable, I am unable to follow your instructions. Please inform me if there is something else that I can do through speech or body.”

The brāhmaṇa said: “While standing, sleeping, or moving about, whether in hunger, thirst or even while falling down, always chant the name of Govinda.”

Kṛṣṇa's name is non-different from Kṛṣṇa (BRS 1.2.108). Therefore, it is potent like Him. It can give anything to the devotee. But the highest award it grants is love, prema. Love is superior even to liberation. This will be further established in Prīti Sandarbha.

ŚrI Jīva Gosvāmī comments that the third case in the compound sva-priya-nāma-kīrtyā (11.2.40) “by chanting the names liked by one,” implies that chanting names of the form of Bhagavān that is most dear to one is the most efficacious process to attain love of Bhagavān. The third case is used for that which is most effective in achieving the result of an action (sādhakatamam karaṇam, Pāṇini Sūtra 1.4.42). The effectiveness of the Name is also understood from the indeclinable evam, “in this way.” This refers to the various devotional activities stated in the previous verse (11.2.39). The sense is that although one performs these devotional activities, evaṁ vrataḥ, it is only by chanting of the name, sva-priya-nāma-kīrtyā, that one attains love which melts his/her heart, druta-cittaḥ. Such an understanding is supported by the statements from a Purāṇa cited by Lakṣmīdhara Paṇḍita, the author of Bhagavān-nāma-kaumudī.

The name is not dependent on any other process. Even if one is unable to follow any other religious principle, the mere chanting of the holy name will bring all perfection. This is the import of the verses cited from Viṣṇu-dharma Purāṇa. Sūta Gosvāmī concludes the recitation of Bhāgavata Purāṇa with a glorification of the chanting of the name (12.13.23). Śrī Caitanya Mahāprabhu specifically stressed on nāma-saṅkīrtana. He said that it will bring all perfection, param vijayate śrī-kṛṣṇa-saṅkīrtanam (Śikṣāṣṭakam 1). This was not known to most people before His appearance. It is He who made nāma-saṅkīrtana popular and said that it is the dharma for kali-yuga. He also predicted that it would become popular in the future, a prediction that has come true.

Śrī Jīva Gosvāmī continues to explain the importance of nāma-saṅkīrtana because at the time of writing this book nāma-kīrtana was not a mainstream practice among Hindus.

Elsewhere the Viṣṇudūtas have spoken about the glories of singing the names of Bhagavān to the Yamadūtas:

A sinner is not purified as much by undergoing atonements or by observing vows delineated by those who know the Vedas as by uttering the names of Bhagavān, because these names reveal the knowledge of the virtues of the glorious Bhagavān. (SB 6.2.11)

The effect of uttering the names of Bhagavān is not limited merely to absolving sins, but also grants one direct experience of Bhagavān’s attributes.

The first three chapters of the Sixth Canto are specifically devoted to the importance and principles of chanting the Holy Name. This is one of the central themes of the Bhāgavata Purāṇa and is indicated by putting the story of Ajāmila, which elucidates the glories of name in the center of the book. The present verse is part of the story. The Viṣṇudūtas are the servants of Bhagavān Viṣṇu and the Yamadūtas are the servants of Yama, the deva in charge of meting out the results of one’s karma after death.