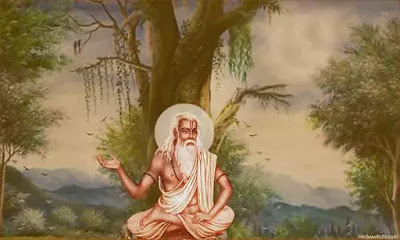 This anuccheda is the source of the expressions vyavahārika ("a teacher who guides one in the course of ordinary affairs") and pāramārthika-guru ("an authentic teacher in the matter of spiritual realization"). The distinction here should not be thought of as simply that of a family guru and a spiritual one.

As I stated earlier (Anuccheda 207), the path of devotion has an exoteric and esoteric aspect, and dīkṣā should be seen as primarily connected with the esoteric aspect, which is defined by the dīkṣā-guru. As the Yoga-sūtra (3.7-8) makes clear, as one progresses in spiritual absorption to the transcendental state, those stages that were previously internal become external. This is the challenge that lies behind Kṛṣṇa's instruction to give up lower dharmas for higher ones.  This is what is behind the constant clarification of higher and lower levels throughout all the Sandarbhas. The sādhaka is always urged to go further and to do what is necessary, find guidance, etc., to define the ultimate desired perfection and the path to attain it. One should read the following anuccheda with that in mind.

As stated in the introduction to Anuccheda 207, strong statements about rejecting a non-Vaishnava guru and other such statements can be seen as having a subtler dimension. In fact, in this path of madhura-rasa bhakti, anything less than service to Radha is external or "functional" and this is why in this context Sri Jiva can quote SB 1.5.15 calling other duties jugupsita or abhorrent.

Anuccheda 211 reminds us that even the vyavahārika-guru is to be seen as the manifestation of  Bhagavān. The verse quoted there (11.17.27) is familiar and it is generally quoted in the context of the pāramārthika-guru, so it is a bit surprising to see Sri Jiva use it in an unexpected way. This is a reminder of the complexity of guru-tattva. Just because a particular guru is seen as exoteric does not mean that he is not a manifestation of the Guru Principle. In fact, the Guru Principle is a continuum that leads us from darkness to light, step by step.

The Mantra Guru is Also Compulsory

Since the śravaṇa and śikṣā gurus are both necessary, the mantra guru is therefore unquestionably so. One should accept an authentic teacher in the matter of spiritual realization, even if it means giving up a teacher who guides one in the course of ordinary affairs. With this intention Śrī Rṣabhadeva said:

One who cannot deliver a person for whom death has arrived cannot be considered as a guru, a relative, a father, a mother, a deity, or a husband. (SB 5.5.18)

In this verse the compound "for whom death has arrived" (samupeta-mṛtyuṁ) means "one who has attained death," i.e., the material world of repeated birth and death (saṁsāra).


Materialistic people are by nature attached to sense pleasure. Moreover, in the name of dharma you have advised them to participate in contemptible fruitive activities. This is a great impropriety on your part because people will accept such selfish fruitive acts as the true path of religion on the authority of your statements. So if anyone tries to establish the real truth and to forbid such actions, they will not believe his words. (SB 1.5.15)

Therefore, one should treat those in the above-mentioned relations as teachers or respectable seniors only for as long as one has not obtained the shelter of the feet of a guru who can deliver one from the world of death.

The mantra-guru is compulsory on the path of bhakti. In fact, bhakti only truly begins after one has accepted mantra-dīkṣā. Śrī Rūpa Gosvāmī while enumerating the limbs of bhakti counts the acceptance of guru as the very foundation of bhakti. He writes,

Therefore, one should take shelter of a guru, take dīkṣā from him and study under him. One should render service to him with reverence and follow the conduct of saintly devotees. (BRS 1.2.74)

In the past in India everybody had a guru. A person without a guru was designated as nigura, and this word is still used as an abusive expression although people have forgotten its original meaning. There were two types of guru, the family guru and the spiritual guru. They could both be the same person or different, depending upon their qualifications. The family guru was the one who guided the family in religious ceremonies related to the varṇāśrama system, such as a child’s birth, name-giving ceremony, the sacred-thread ceremony, marriage, etc. For example, in Śrīmad Bhāgavatam we understand that Garga Muni was Kṛṣṇa's family guru, but Kṛṣṇa studied from Sandīpani Muni.

Śrī Jīva Gosvāmī designates the family guru as a vyavahārika-guru, a "functional" guru or one who guides in practical matters in daily life. This guru was supposed to be expert in dharma-śāstra, jyotiṣa and also Ayurveda. But to attain perfection in life one needs a spiritual guru, a pāramārthika guru. If there is a conflict between the two one can give up the vyavahārika-guru. There is no harm incurred in that. The reason is that the purpose of life is not to just follow the principle of dharma but to attain love for Bhagavān. That actually is the real purpose of dharma (SB 1.2.13, Anuccheda 13). Thus if dharma or guru is not leading to that ultimate goal they should be given up. That is why Kṛṣṇa recommended to give up karma or dharma once one has attained śraddhā in bhakti (11.20.9, Anuccheda 173), and Gītā (18.66). The same is instructed by Rṣbhadeva to his sons. King Bali disobeyed his family guru Śukrācārya when the latter advised him not to offer three steps of land to Bhagavān Vāmanadeva. Giving up one’s guru is usually a big offense, but in this case it was commendable on the part of Bali.

Śrī Nārada criticized Vyāsa because he only stressed the path of karma-kāṇḍa which will make people steeped in materialism. They would not like to give it up because an authority like Vyāsa has prescribed it. That is why Buddha had to come and decry the Vedas.

Even a Vyavahārika Guru Should Be Respected

Otherwise, even the followers of karma are meant to view their teacher as a manifestation of Bhagavān, as Śrī Kṛṣṇa said:

One should know the preceptor to be Myself. One should never disregard or envy him, thinking him to be a common mortal, because the guru is the embodiment of all the gods. (SB 11.17.27)

This verse was spoken in the context of the duties of a student, or brahmacārī.

In this verse Kṛṣṇa is referring to a vyavahārika guru and not the pāramārthika or spiritual guide because this verse is found in a section describing the duties of a brahmacārī student, which is part of the Varṇāśrama-dharma. The meaning is that even a vyavahārika guru should be treated in the same way as a pāramārthika guru as long as there is no conflict between the instructions given by them. It is only if the vyavahārika guru becomes an obstacle to the path of bhakti that one can disobey or even abandon him. The reason is that the vyavahārika guru also facilitates one’s spiritual advancement. It is for that reason that Kṛṣṇa says, “Know the preceptor to be Myself.” Even so, if the very same preceptor becomes an obstacle then he deserves to be given up because he is acting against his function.

Seeing the Divine in one's elders and teachers and behaving accordingly is a proper training and preparation for a student who will take a pāramārthika guru.

नि (ní) “always prefixed either to verbs or to nouns, in the latter case it has also the meaning of negation or privation”: