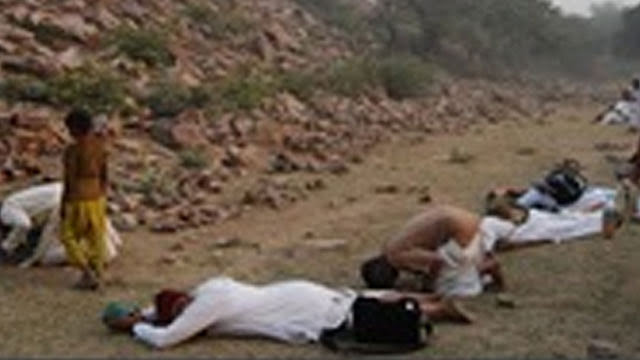 After the short interlude about jñāna-mārga, Sri Jiva turns to the sāmmukhya of the Absolute with attributes. Ahaṅgrahopāsanā is not of great importance, but is mentioned in passing. Then Sri Jiva turns to Sādhanā Bhakti, which will be the theme developed in the subsequent anucchedas. This is where we begin the discussion of different kinds of bhakti, by defining the subject. This will then be expanded on in the next anucchedas.

Babaji's comment has some essential elements that are basic knowledge for anyone reading Jiva Goswami and needing a bit of background in Indian logic (nyāya).

We have thus explained the nature of jñāna, or non-dual awareness. It is this very matter that is spoken of in the Gītā (8.3), where the word adhyātma is defined as sva-bhāva, [which is usually translated as "Spirituality means the true nature of the self "], where sva should be taken to mean the pure self , and bhāva means contemplation thereof. The word ātmā again means Self, and the prefix adhi refers to the establishment of something as one’s chief subject . Thus because non-dual awareness is rooted in the Self, it is known as adhyātma.

Now we will discuss ahaṁgrahopāsanā, or worship of oneself as supreme. To think: “I am God, who is endowed with such-and-such potencies,” is called ahaṁgrahopāsanā. The outcome of this type of contemplation is that those potencies of God become manifest in the practitioner. An example of this is found in the Viṣṇu Purāṇa. When the devotee Prahlāda was bound by snake-ropes, he released himself from such bondage by meditating on himself as the Supreme. The final attainment on this path is to acquire a form and opulence like that of Bhagavān. This is achieved by the principle known as kīṭa-peśaskṛt nyäya.

[This is the principle whereby one is transformed into the thing upon which he dwells upon with great intensity, especially fear. The example is that of the potter wasp, which captures another insect and keeps it prisoner there. Some time later, another wasp comes out of the nest, so it appears that the captive has been transformed into a wasp by constantly meditating on its captor out of intense fear. Similarly, one who constantly meditates on oneself as the Supreme becomes a manifestation of the Supreme endowed with specific attributes of God. See SB 7.1.27, Anuccheda 319. ]

Just as in jñāna one identifies with Brahman, in ahaṅgrahopāsanā one identifies with Bhagavān. It has been counted separate from bhakti because in bhakti the distinction of devotee and Bhagavān is always preserved, no matter how intimate the love. An example of ahaṅgrahopāsanā can be found in the life-history of Prahlāda. When he instructed his father about devotion to Viṣṇu his father was furious and considered Prahlāda, his own son, to be his enemy and ordered for him to be killed. However Prahlāda was immune to death. He was tied with divine ropes called snake-rope. At that time he meditated on himself as the Supreme, as described by sage Parāśara:

Because infinite Bhagavān is all pervading, I am He. Everything emanates from me, I am everything, and everything is in me, the eternal. I am imperishable, eternal, Paramātmā, the support all selves. I am also known as Brahman. I am the Supreme Person who existed before [creation] and will exist in the end [after dissolution]. (Viṣṇu Purāṇa 1.19.85,86)
When Prahlāda meditated in this way he could break the snake-ropes.

Jñāna and ahaṅgrahopāsanā, although considered to be means for sāmmukhya, are not the recommended process of śāstra, the abhidheya. The reason is that the sāmmukhya they give is not very beneficial, nor is it complete because there is no reciprocation with Bhagavān. Bhakti is the only abhidheya and it awards the perfect sāmmukhya. Therefore Śrī Jīva begins a new topic, the definition of bhakti.

216.3 The practice of bhakti defined


[taṭastha-lakṣaṇa] I will describe devotion to Bhagavān Viṣṇu, by which everything is attained. Bhagavān Hari is not pleased by anything as much as He is by devotion. (GP Pūrva-kaṇḍa 227.1)
[In the next verse bhakti is defined in terms of its etymological root, bhaj. ]


akāmaḥ sarva-kāmo vā mokṣa-kāma udāra-dhīḥ
tīvreṇa bhakti-yogena yajeta puruṣaṁ param
An intelligent person whether desireless, full of desire, or desiring liberation, should worship the Supreme Person with fervent bhakti-yoga. (SB 2.3.10)
This statement shows just how comprehensive the assertion is that everything is attainable by devotion, and thus this part of the definition is free from the defect of being too narrow.

The intrinsic characteristic of devotion is referred to by the word sevā, or service, and this service implies loving responsiveness to another with the three faculties of body, mind and speech. Therefore, this definition excludes all service performed out of fear and enmity, as well as the worship of oneself as Supreme. The adjectival compound "the pre-eminent path of attainment" (sādhana-bhūyasī), qualifying the word bhakti, means that devotion is the best of all spiritual paths.


All those means that were spoken of by Bhagavān so that unenlightened humanity could easily attain realization of the Self you should know to be bhāgavata-dharma. (SB 11.2.34)

The term "unenlightened humanity" refers to those who are unaware of the glory of God. The implication is that the methods spoken of by Bhagavān are conducive to realization of the Self even when performed by such people. Realization of the Self here refers to the revelation of God’s own nature, manifest in the three features of Brahman, Paramātmā and Bhagavān. This realization is easily achieved by the methods spoken of by Bhagavān Himself. That Kṛṣṇa Himself spoke this knowledge is indicated in verses such as this:

In the previous verse (11.2.34) the methods spoken of by Bhagavān refer specifically to the knowledge indicated in Kṛṣṇa’s statement. Direct devotion is also called bhāgavata-dharma, because the word parama-dharma [a synonym of bhāgavata-dharma] is used to describe bhakti in this verse:

To get an object one has to know its distinct characteristics. Every object has many qualities. Some of them are general, which it shares with some other things, and some quality or qualities are special to it, not found in any thing belonging to a different class. For example, a cow has four legs, two ears and a tail. A dog also has that. But a cow has some characteristics that make it distinct from every other animal. Those distinctive qualities constitute its definition. It is necessary to know those distinct features to understand what it is so that we do not mistake a horse or a donkey for a cow. Lakṣaṇa-prāmāṇabhyām vastu-siddhih, na tu kevala-pratijñā-mātreṇa: an object is established by giving its definition and the process to know it, and not by merely by making a declaration about it. Therefore, Śrī Jīva begins to define bhakti.

The internal definition of bhakti is favrorable service to Kṛṣṇa by mind, body and speech. This excludes bhakti that is done out of some other reason, such as fear. In some parts of India the phrase bhaya-bhakti is popular. In Rāma-carita-mānasa Tulasidāsa also makes a similar mention, bhaya bin hohi na prīti, there is no love without fear. Śrī Jīva Gosvāmī, however, rejects such concepts of bhakti. Śrī Rūpa Gosvāmī makes it very clear while defining bhakti (BRS 1.1.11), “To perform favorable action for pleasure of Kṛṣṇa without having any desire such as for liberation, material pleasure or some material positions, is called pure bhakti.”

Śrī Jīva cites a statement of sage Kavi to give an alternative definition of bhakti. In this verse the word upāya, "the means," is the intrinsic definition because this refers to the actual limbs of bhakti spoken by Bhagavān Himself. These means are such as chanting the names of Bhagavān. The compound word ātma-labdhaye gives the extrinsic definition of bhakti because it describes the influence or effect of bhakti. The word ātmā in this word refers to Brahman, Paramātmā and Bhagavān. This implies that bhakti is the means to realize the three manifestation of tattva, and there is no other process for it. This also implies that the perfection on the path of jñāna as well yoga is not possible without bhakti.