Showing posts from September, 2016
Show all

Uddhava's glorification of the Gopis 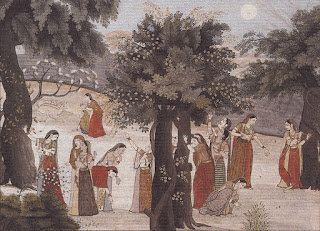 I have been appreciating Babaji's morning chanting of hymns, which I happily participate in each morning. He has a teacher who has given him a number of striking tunes for these Sanskrit verses, which make my "chanting of Sanskrit mantras" in need of updating. I was also inspired to make a few spontaneous recordings, using those tunes and on my SoundCloud page I have also added a few recordings of Babaji also.
Most Gaudiya Vaishnavas tend to chant songs in Bengali or common Sanskrit hymns like Rādhā-kṛpā-kaṭākṣa-stotram, but Babaji has chosen to select notable hymns or passages from the Bhagavatam itself, which is a testament to his devotion to our main shastra.
The following verses are Uddhava's famous panegyric glorifying the gopis in 10.47. These verses are unique because there is no other such praise dedicated to any devotee by another devotee found there.
After staying in Vrindavan in the association of the cowherd folk, Uddhava is so impressed by the gopis’ d…
Post a Comment
Read more 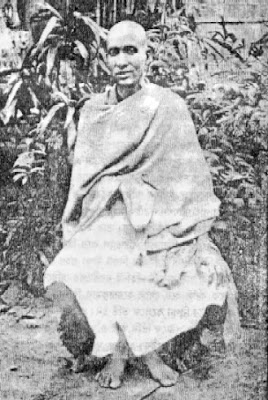 
Appearance: Bhadra 30, 1305 = Sept. 14, 1898 Disappearance : Ashwin 3, 1364 = Sept. 20, 1957
--o)0(o--
Before taking to the Vaishnava life, Haridas Das was known by the name Harendra Kumar Chakravarty. His birthplace was in the village of Madhugram in the Pheni subdivision of Noakhali district in what is now Bangla Desh. He came from a line of scholarly Brahmins: his father's name was Gagan Chandra Tarkaratna and grandfather was Goloka Chandra Nyayaratna. Haridas Das only had one brother, Manindra Kumar, who left home to take up a life of renunciation while still quite young. Neither brother ever married, but observed the principles of celibacy throughout their lives. Manindra Kumar took initiation from the same spiritual master as his brother and came to Nabadwip where he lived at the Haribol Kutir for fifteen years, taking the name Mukunda Das Babaji. 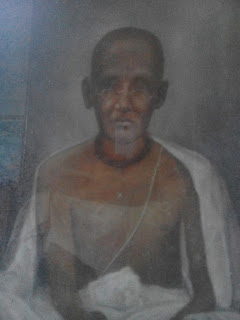 Am I right or wrong?

So if you choose to accept Siddhanta Saraswati's line, then fine. But you have to recognize that they are two different paths, similar in many respects, supposedly following the same shiksha tradition. But in the traditional paramparas, the shiksha includes a particular culture of raganuga bhakti that is NOT accepted by the Gaudiya Math. They have their reasons, their interpretations of shastra that are their own. They are not in agreement. But in view of the similar objective and similar antecedents there is a possibility of cooperation, but it is not very likely as long as each considers the other illegitimate.

In fact, since everyone is chanting the Holy …
6 comments
Read more
More posts