Bhakti Sandarbha 203: The Guru Should not be Greedy 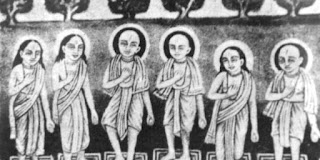 This is a fairly short anuccheda and discusses the characteristics of the unqualified guru and what should be done in such a case.

The Guru Should not be Greedy

There are some definitive statements about the qualifications of a teacher in the Brahma Vaivarta Purāṇa:


A speaker can be of two types—with or without attachment. The one with attachment is greedy and covetous, and his words will not touch the student’s heart. Such a teacher gives instruction, but he does not test the student. Instruction given without testing leads to the destruction of society.


A person who is eager to hear should accept a superior teacher whose speech is eloquent and who is an ocean of the scriptural essence, without consideration of his family, conduct or behavior.

The quality of speaking in such an eloquent manner is expressed elsewhere in the same Purāṇa:


The superior teacher is one upon hearing whom speak even a person full of desire and anger, or a dejected soul steeped in misery becomes cheerful and serene.

Because a guru of this caliber may not be available, some people accept many gurus, desiring to learn logic and understand the differences between different schools, as Śrī Dattātreya said:


Knowledge obtained from only one teacher cannot be deeply rooted in one’s being nor can it nurture mature growth. Although Brahman, the Ultimate, is one without a second, It has been sung of by the sages in multifarious ways. (SB 11.9.31)

The meaning here is self-evident .

In the previous anuccheda it was said that the devotional mood (bhāva) and prowess (prabhāva) of a sādhu influence the one who associates with him. This is also true about his other qualities. That is why it is said that one should associate with a sādhu of good conduct.


Śrī Rūpa Gosvāmī says that the qualities of a sādhu or guru reflect in the student like a gem (BRS 1.2.229). Therefore, the teacher should be of good conduct, otherwise his ill-character will influence the student adversely. Moreover, if a teacher is not realized himself and does not believe in the teachings he gives, they will not touch the heart of his student. For this reason, the sage Prabuddha said that the guru should be realized in the Truth, pare niṣṇātam.

There are professional speakers of Śrīmad Bhāgavatam in Vrindavan and elsewhere who draw big crowds. But their lectures do not have much positive influence on the audience. This is because the speaker himself does not follow the teachings of the book. He uses it only for earning money and followers. He is like the spoon that is used to serve sweets: itself it does not know what the sweets taste like. In Vrindavan there are schools to train professional speakers of Śrīmad Bhāgavatam.

Another important point made here is that the teacher should also test the student. He should not give knowledge to an unqualified student. If he does that it will only bring ruination to the society because the unqualified student will misuse the knowledge for a material purpose. In the past gurus were very strict and would not teach anyone and everyone. They would make sure that the interest of the student was in bhakti alone and not profit. This would only be possible if the teacher himself was not covetous and greedy. There is a story about Rāmānujācārya that his guru refused to accept him as student no less than eighteen times. Narottama Dāsa Thākura was similarly refused by Lokanātha Gosvāmī for long time.

At present such strict testing of students is generally missing. Teachers are very eager to get students and there is much competition between them. Therefore the standard of bhakti has gone down in comparison to what it used to be fifty or sixty years ago.

If one cannot find a qualified guru as described in the previous and the present anucchedas then one should try to learn the truth from different teachers. Dattātreya is an example of this. He speaks of twenty-four gurus (SB 11.7-9). Of course, these were not human gurus who personally taught him anything in words. It was Dattātreya himself who learned from them through using his own intelligence on observing their behavior. He counted even insentient objects such as the earth and the air in his list of gurus. Such an example is not really meant to be emulated, especially by those on the path of bhakti. In bhakti one should have only one mantra- or dīkṣā-guru and study from him. If there are subjects that the dīkṣā-guru is unable to teach or if he is physically incapable of it, then one can study, with his permission, from other teachers who have a similar mood and are not inimical towards him.

Vidya said…
Sataya Narayan Baba is saying that with the permission of one's shiksha guru one should ask for shiksha elsewhere. But what if one's diksha guru does not indicate anyone except his one guru to learn from? He is very critical towards some other guru who is in good standing over some dispute in the past, and somewhat critical towards god-brother of his own guru over some dispute in the past, and critical towards one of his god-brother? All these devotees did not have full respect to his guru or expressed some dissatisfaction towards him. He is very devoted to his guru so this motivates him to be critical towards those three. Consequently he does not promote or openly appreciates others as shiksha gurus for his disciples. He considers his own guru as superior over the others and promotes that to his disciples. What would be the position of such guru and how one should act?
Saturday, 05 October, 2019

Jagadananda said…
Radhe Radhe Vidya. This exact question is actually covered later in Anuccheda 238. Some of tha is found here https://jagadanandadas.blogspot.com/2018/08/the-parampara-institution-in-gaudiya_29.html, or you can wait a few days.
Saturday, 05 October, 2019