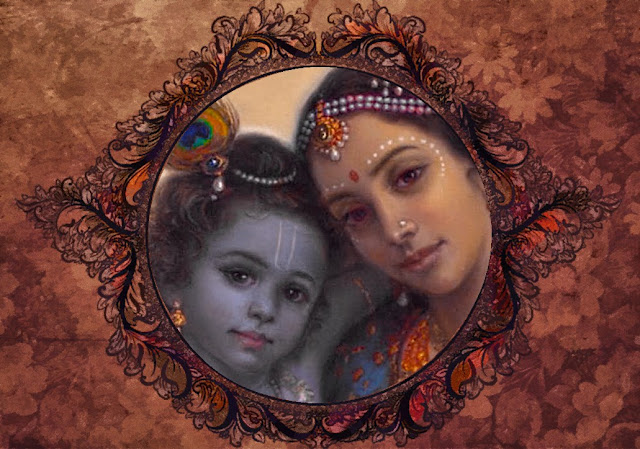 Please remember that the following is only a draft that will be attended to by other editors before going into publication. It is being shared here as a foretaste for interested students of the Sandarbhas. This material should be considered copyrighted and not appropriated unfairly. Click on the Bhakti Sandarbha label to find other anucchedas. The complete Bhakti Sandarbha is not available here, only certain portions. Thank you.

N.B. E-books are now available from jiva.org, as are the other first four Sandarbhas.

Also anyone interested in taking Sanskrit with me or participating in the continuing Jiva Tirtha course (Oct. 2020) can register here. It is worth saying here that Babaji's continued determination and unflagging commitment to the scholarly approach to Gaudiya Vaishnavism is slowly paying off with good, dedicated, qualified, intelligent and hard-working students. It is a tough thing for young people especially to commit to a program that is not necessarily going to pay off financially, but the fact that some are doing it is a great credit to Babaji.

In this way, because Bhagavān has no sense of bias to be instigated by criticism or other unfavorable attitudes, one can meditate on Him by any means, as indicated in this statement: “The Lord gives the divine destination to one who takes His conceptual form within his mind even once...” (SB 10.12.39) From statements such as this, it is understood that by the absorption that results from meditating even on His likeness —even if one thinks of Him out of enmity—the sin of criticism is destroyed. Thus it was fitting that Śiśupāla attained the state of liberation by merging into Bhagavān’s body.

The verb yuñjyāt, “one should engage [the mind],” which is in the optative mood (liṅ), indicates possibility [and not an injunction], when used in connection with feelings such as love and desire, because no injunction can be given in regard to such feelings. If one engages the mind, i.e., meditates, on Bhagavān in any one of these moods, even through enmity, he or she will not see anything apart from Bhagavān. This means that the mind becomes absorbed in Him.

“Continuously bound by enmity” (vairānubandhena) here means an unbroken feeling of hostility; the absence of such enmity (nirvaireṇa) means its complete absence, i.e., indifference. This in turn also implies the absence of sexual desire , etc. Thus, nirvairam refers not only to the absence of feelings of hatred but to all such attitudes. So it should be taken that one should engage in meditation without any of these mundane feelings like enmity in the understanding that it is so ordained. Meditation here should be taken as indicative of [all the limbs of vaidhī] bhakti-yoga. This means that one should engage in bhakti-yoga. "Affection” (snehaḥ) refers to a specific type of genuine mutual love, distinct from sexual desire [which has been mentioned separately (kāmena)]. This thus specifically refers to the sādhaka’s taste or ruci for such love.

It is understood that Bhagavān was not disturbed by the criticism of Śiśupāla. Still, abusing Bhagavān is a forbidden act. He should be sent to hell for engaging in such offensive actions. Śrī Nārada's response to this doubt is that the very act of meditating on Kṛṣṇa purifies the meditator, even if that meditation is done with feelings of enmity. This is the excellent quality of Kṛṣṇa that no matter how one comes into contact with Him, one benefits from it. It does not matter whether you touch fire in a loving or angry mood, you will still feel the heat.

The verb yuñjyāt [lit. should unite] is in the optative mood, liṅ-lakāra. Generally it is applied when giving an injunction (vidhi), but it can also be used in the sense of possibility (sambhāvanā). This verb has been used here with different adverbial expressions – out of enmity, without enmity, out of fear, etc. The sense of the verb varies depending upon the way it is applied. One cannot enjoin one to feel in a particular way or to have any kind of emotional state. Therefore, in cases where an emotion appears to be prescribed, the meaning should be taken in the sense of possibility. However, one can be ordained to act in a certain way if one has no emotional state ("without enmity"), so when used with nirvaireṇa, the idea is that one should still engage in meditating on Bhagavān in bhakti-yoga according to the regulative principles of the scripture, etc.

When one’s mind is fully absorbed in an object then one loses the sense of separate existence from it. This is the meaning of the last part of the verse: “Then one will not see anything apart from Him.” This is the definition of samādhi, as described above in Anuccheda 278. Śiśupāla’s absorption in Kṛṣṇa was like that. His envy was so intense that he could become fully absorbed in Kṛṣṇa without any other thought or awareness, including of himself. Because of the potency inherent in Kr̥ṣṇa, this made him free of all impurities and sins, including the sin of abusing Him. This is why he attained liberation after being killed by Kṛṣṇa.

Alternatively, the meaning of last part of the verse is that Kṛṣṇa does not discriminate how one approaches him. He benefits anyone who becomes absorbed in Him.

Ganesh said…
Namaste Jagatji....
I am located in mumbai I was wondering after the lockdown to come meet you....
Ganesh(amitborate21@gmail.com)
Saturday, 18 April, 2020

Jagadananda said…
Of course. But I will try to go to Bengal sometime this summer, if India Railways has any empty spots for me. Probably in August. You can reach me at jankbrz yahoo.com
Sunday, 19 April, 2020