Bhakti Sandarbha 324 : Devotion is Never to be Found in Inimical Feelings 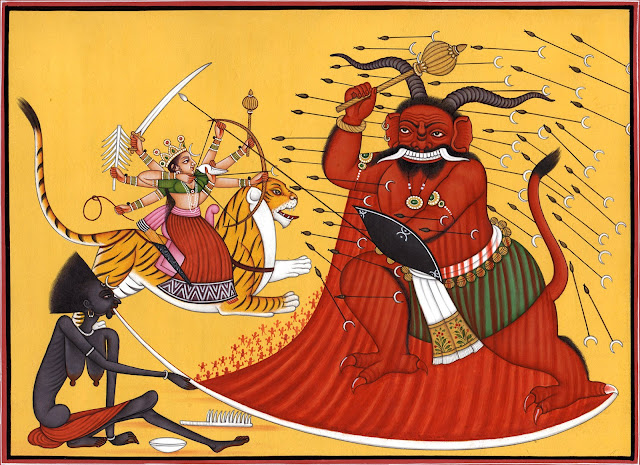 Sometimes I look at a file and wonder if I hadn't reverted to an older version since I remember making changes that don't appear to be there and obvious mistakes are remaining. This appears to be such a case. I hope this doesn't apply to any more.


Anuccheda 324 : Devotion is Never to be Found in Inimical Feelings

From the analysis given thus far it is understood that the path of attachment, bhāva, in general is extremely powerful. How much more potent is it then to absorb the mind in Bhagavān specifically through the path of rāga? Thus by the a fortiori (kaimutya) principle, it is concluded that the recommended path to achieve Bhagavān is none other than rāgānugā bhakti, as Śrī Nārada told Vasudeva:

Even kings like Śiśupāla, Pauṇḍraka and Śālva, who were constantly absorbed in inimical feelings toward Kṛṣṇa, even while sleeping, sitting and performing all other normal activities, attained the liberation of attaining oneness with Him because their minds took the form of His gait, graceful movements and glance. So what to speak of those whose consciousness is fully merged in Him out of love. (SB 11.5.48)

The words “whose minds took His form” (ākṛti-dhiyaḥ) meaning that their minds were imprinted with the images [of Kṛṣṇa’s walk, graceful movements, glances, and so on]. The same point is made in the Garuḍa Purāṇa:

Even ignorant and sinful people like Śiśupāla and Duryodhana, who severely criticized the best of the gods, Kṛṣṇa, became free of their sins simply by remembering Him and thus achieved liberation. So what doubt can there be that those endowed with supreme devotion to Him achieved the supreme destination? (GP Ācāra-kāṇḍa 227.35)

Therefore, in referring back to this verse: “The absorption in Bhagavān that a mortal being can reach through unobstructed enmity cannot be attained by bhakti-yoga. This is my definite opinion.” (SB 7.1.26); one should not misinterpret this to mean that unceasing enmity is the best attitude with which to approach Bhagavān.

In this regard, we may also examine Bhagavān Viṣṇu’s statement to Jaya and Vijaya:


Becoming free of your disrespect to the brāhmaṇas by continuous absorption in Me through anger, you will again return to Me in a short period of time. (SB 3.16.31)

Here also Bhagavān recommends unbroken absorption in Him through a semblance of anger to mitigate the semblance of the offense they made toward the brāhmaṇas. Bhagavān recommended this method to attain Him specifically for them, because as eternal associates of Bhagavān they naturally belong in His company, and because this whole scenario was orchestrated just to facilitate Bhagavān’s playful fighting spirit.

In this matter some people are of the opinion that the quality of devotion is found even in hatred and other similar feelings. This is wrong, however, because the words bhakti and sevā connote favorable action, whereas enmity, being unfavorable to Bhagavān, fails to meet the criterion of devotion. In the Uttara-khaṇḍa of the Padma Purāṇa also, bhakti is differentiated from hatred:

The question may thus be raised as to why Śrī Uddhava described the inimical as devotees in statements like this: “I consider the asuras to be devotees.” (SB 3.2.24)?

It would be wrong to conclude that the asuras are devotees, because the verb “I consider” (manye) indicates that this was spoken as a poetic fancy (utprekṣā) [which is clear from the context of Uddhava’s exchange with Vidura]. Thus it is proven that the asuras do not actually possess the quality of being devotees.

It was natural at that moment for Uddhava to refer to the asuras fancifully as devotees, because he was overwhelmed with grief and longing due to separation from Bhagavān who had just left the world. In doing so, he was reflecting on their great fortune to be able at least to see Bhagavān at the time of their death while opposing Him in battle. The substance of Uddhava’s ironical comparison is as follows: “Alas, we are averse to Bhagavān because there is no longer any possibility for us to behold the moon-like face of Bhagavān at the time of our death. Even the asuras are devotees, more so than us, because at the time of death they were blessed with the great fortune of seeing the moon-like face of Bhagavān.”

Therefore, devotion is never to be found in hatred and other inimical feelings.

Śrī Jīva has established that bhakti is the recommended process, abhidheya, of Śrimad Bhāgavatam. Then he said that bhakti is of two types vaidhī and rāgānugā. Now he says that it is only rāgānugā bhakti that is the abhidheya. For this he cites a verse spoken by Nārada, the foremost teacher of bhakti, to Kṛṣṇa’s father Vasudeva. The implied meaning of this verse is to engage in rāgānugā bhakti. This is the significance of the compound word anurakta-dhiyām. Usually instruction is given by using the potential or optative mood. They are called vidhi-upadeśa. Instruction given without using such a verb is called siddhopadeśa.

One should not misconstrue that this and other such verses are recommending enmity towards Kṛṣṇa. The intention of these verses is to stress absorption or attachment to Kṛṣṇa. This is so because mere hatred will not lead to liberation. This is known from the history of King Vena.

One may raise a doubt on this. Lord Viṣṇu told Jaya and Vijaya just after they had been cursed by the Kumāras that they would be freed from their curse and return to Him by the yoga of anger (saṁrambha-yoga). Śrī Jīva comments that Jaya and Vijaya are eternal associates of Viṣṇu. There is no possibility of them committing an offense. The absolute impossibility of committing offenses is reached at bhāva-bhakti. So how can devotees endowed with prema possibly do so. Śrī Viśvanātha Cakravartī writes, “With the appearance of prema, the eradication of anarthas is complete. With the attainment of Bhagavān’s association, the eradication of anarthas is absolute, with no possibility of their reappearance.” (Mādhurya-kādambinī, 3)

Therefore, the offense of the Kumāras was not really an offense, but the mere appearance of one, ābhāsa. Similarly their anger or hatred towards Bhagavān was not real, but a mere semblance. It was manifest in them to give pleasure to Bhagavān in battle.

Śrī Jīva raises another issue. Some people consider dveṣa and fear also as part or cause of bhakti. There is a popular term bhaya-bhakti, or devotion out of fear [a popular caupai from Rāma-carita-mānasa – bhaya binu priti na hoi]. This is certainly a misunderstanding. The reason is that the basic definition of bhakti is act favorably for the pleasure of Bhagavān, ānukūlyena kṛṣṇānuśīlanam (BRS 1.1.11). But in anger, hatred or fear there is no intention of doing favorable service. Rather desire is to destroy or harm the object of hatred or anger. In the case of fear one may do service forcibly, but it is not done with the intention of pleasing the object of service. Therefore, these negative emotions cannot be considered as a part or cause of bhakti.

The Padma Purāṇa verse cited in this anuccheda is spoken by Prahlāda to his father who wanted to see Viṣṇu so that he could fight with Him and kill Him. Prahlāda makes it very clear that Bhagavān cannot be seen by anger or envy. He can only be seen by bhakti. The logical conclusion is that neither anger nor envy are bhakti.

Śrī Jīva raises a further doubt on this. He cites a statement by great devotee Uddhava who seems to accept the asuras as devotees. Uddhava spoke this verse to Vidura after Kṛṣṇa has left the world when the two met on the banks of the Yamunā in Vṛndāvana. He was feeling great distress and considered himself utterly unfortunate. He conjectured that the asuras were greater than he because they were able to see Bhagavān at the time of their death while being killed by Him. The word manye is used in the sense of conjecturing (utprekṣā), as is said in Sāhitya-darpaṇa, “Manye, śaṅke, dhruvam, prāyaḥ, nūnam, etc., are used to make conjectures.” (SD 10.46).