Bhakti Sandarbha 315-316 :: Bhagavān is not Disturbed by the Criticisms of the Ignorant 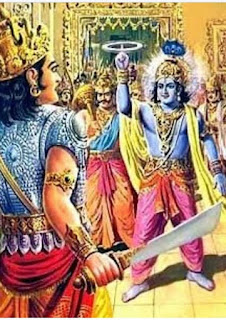 Please remember that the following is only a draft that will be attended to by other editors before going into publication. It is being shared here as a foretaste for interested students of the Sandarbhas. This material should be considered copyrighted and not appropriated unfairly. Click on the Bhakti Sandarbha label to find other anucchedas. The complete Bhakti Sandarbha is not available here, only certain portions. Thank you.

N.B. E-books are now available from jiva.org, as are the other first four Sandarbhas.

Also anyone interested in taking Sanskrit with me or participating in the continuing Jiva Tirtha course (Oct. 2020) can register here. It is worth saying here that Babaji's continued determination and unflagging commitment to the scholarly approach to Gaudiya Vaishnavism is slowly paying off with good, dedicated, qualified, intelligent and hard-working students. It is a tough thing for young people especially to commit to a program that is not necessarily going to pay off financially, but the fact that some are doing it is a great credit to Babaji.

Śrī Nārada replied to Yudhiṣṭhira’s inquiry as follows: “A blasphemer of Bhagavān is certainly destined for hell, so what is the actual intention behind your question? Are you suggesting that Śiśupāla should have gone to hell because his insults pained Bhagavān, or even if that were not the case, that the very act of hearing criticism of Bhagavān was sinful, like drinking wine or any other forbidden action?”

Out of these two possibilities, the criticism leveled by foolish people is done with reference to the constituent qualities of material nature and, in particular, ignorance (tamas). Their criticisms do not apply to Bhagavān, whose body is devoid of material qualities and who is the shelter of everything, including prakṛti, the sum total of material nature. And unlike conditioned beings, Bhagavān has no identification with material objects, including prakṛti. Therefore, Bhagavān is certainly not pained by any criticism aimed at Him with respect to the material qualities.

Criticism (nindanam) means to speak of others' faults; and nyakkāraḥ means to dishonor. The material bodies of living beings, which are meant to help one understand the nature of duality, such as praise and blame, are created due to the lack of discrimination between inert matter and the spirit that animates it.

Sage Nārada begins answering Yudhiṣṭhira's question about why Śiśupāla was liberated instead of going to hell for abusing Kṛṣṇa. There were two good reasons for him to go to hell. The first is because of causing pain to Kṛṣṇa by hurting Him verbally. The second was that even though he may not have hurt Kṛṣṇa, he still engaged in a forbidden act by abusing Him.

Nārada refutes the first possibility by pointing out that Kṛṣṇa’s body is not material. Criticism is based on the defects in the object, his material body or character, which are manifestations of the guṇas of material nature. Because Kṛṣṇa’s body is not material, therefore, no criticism or abuse can apply to Him or cause pain to Him. Even wise people who understand the difference between body and self are not disturbed by any criticism. This is the nature of a person who has transcended the guṇas (Gītā 14.24-25).

Criticism Affects Only Those in Bodily Consciousness
ततश्च (भा. ७.१.२३-२४)—

In this world (iha), i.e., in this material world, living beings experience the duality of "I" and "mine" due to identification with the body; they are subjected to violence (hiṁsā) through punishment and criticism as a result of the same bodily identification. And because their self-identity is bound to the body, when the body dies, it is experienced as the death of the living being. Yet this type of bodily identification does not exist in Bhagavān. So by what means can violence be done to Him? Not by any means whatsoever. This is the intention of the above verses.

The reason that Bhagavān is devoid of such ego is also stated in the verse: it is because He is “the absolute unity” (kaivalya), which means that He is pure, having a form consisting of existence, consciousness and bliss, which is not subject to any form of criticism or punishment. That Bhagavān’s form is pure can be understood by the a fortiori principle (kaimutya-nyāya) applied to this verse:


The residents of Vaikuṇṭha do not have material bodies, senses or life air [so how much more is this true in the case of Bhagavān of Vaikuṇṭha]. (SB 7.1.34)
The fact that Bhagavān is beyond the range of criticism is confirmed in the Gītā:

The reason Bhagavān is distinct from other living beings is that He is the Soul of everyone (akhilātmanaḥ). And the reason He is the Soul of everyone is that He is the transcendence (para), which means that He is devoid of contact with material nature and its various manifestations. Another reason why Bhagavān cannot be subjected to violence is indicated by the words, “He is the dispenser of punishment for all” (dama-kartuḥ). This implies that by His extraordinary, unlimited power, He disciplines and teaches all.

In the case of conditioned beings there is a distinction between the self and the body that conditions it. Thus there is a duality in their experience. As soon as a self identifies with a material body it becomes liable to rāga and dveṣa related to sense experiences. Each sense has its own rāga and dveṣa, i.e., attractions and repulsions (Gītā 3.34). A person feels elated by praise and upset by criticism. But in the case of Kṛṣṇa, there is no such duality because He is not different from His body. His senses do not have any rāga or dveṣa towards material objects. Even a jīvanmukta is not disturbed by praise and criticism, so what to speak of Bhagavān!

Because Kṛṣṇa’s body is not material, conditioned beings do not really know Him. He can only be known by bhakti. For others He remains veiled by His yoga-māyā (Gītā 7.25). Therefore, whatever critical statements such people make about Him are not really about Him, but about some misconception they have of Him. In fact, every criticism of God is ultimately a straw man argument. Thus He is not disturbed by them, nor should His devotees be.