VMA 1.5 : Take shelter of Vrindavan with all your being 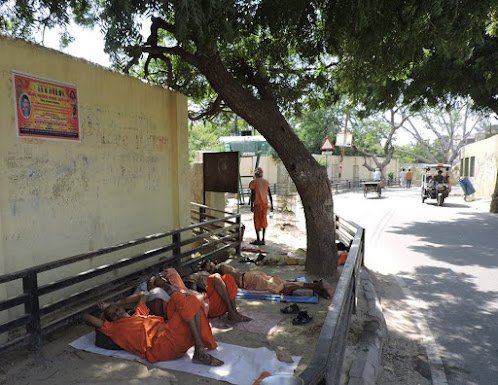 Think of Vrindavan with loving longing!
Engage your every limb by rolling in its dust,
Be fixed unshakably in divine love
by offering up your body to the Dham.


Worship Radha’s lover
and give full satisfaction
to every creature here, moving or unmoving.


Vrindavan alone is the supreme destination,
take shelter of it with your entire being. (1.5)

After briefly glorifying Vrindavan, Prabodhananda for the first time gives the basics of Braja-vāsa-sādhanā. Surrender and taking shelter are the essence of this practice.


tavāsmīti vadan vācā tathaiva manasā vidan |
tat-sthānam āśritas tanvā modate śaraṇāgataḥ ||
One who has taken shelter (śaraṇāgati) leads a life of happiness, for with his words says, "I am yours, O Lord." In his mind he so thinks. And with his body, he resorts to the Lord's own abode. (HBV 11.677)
Prabodhananda Saraswatipada does not use the direct commands of the second person singular, but the third person passive imperative -- "Vrindavan should be thought of with intense longing, etc. " This means it is a general order applicable to all, though he is addressing his mind in particular.

Self-surrender (prapatti or śaraṇāgati) is often considered the fundamental basis of bhakti itself. There are six items that are generally listed as being components of self-surrender.


ānukūlyasya saṅkalpaḥ prātikūlyasya varjanam
rakṣiṣyatīti viśvāso goptṛtve varaṇaṁ tathā
ātma-nikṣepa kārpaṇye ṣaḍ-vidhā śaraṇāgatiḥ
There are six kinds of self-surrender: the determination to act favorably to the Lord, to forsake all that is unfavorable to Him, the belief that Bhagavān will give one protection, accepting Bhagavān as one’s guardian and nourisher, throwing down the self, and humility. (Vaiṣṇava-tantra quoted in Bhakti-sandarbha 236)
Since self-surrender is a passive act, it is not directly a limb of devotion, and according to Jiva Goswami, is rather an aspect of faith itself (śraddhā). Sri Jiva says that the main element or aṅgī of prapatti is accepting the Lord as one's guardian and nourisher (goptṛtve varaṇaṁ). One who takes refuge in the Lord -- or the Dham -- has to thrown himself down entirely on the mercy of the Lord, as utterly dependent, recognizing that only after many, many births of devotional practice, by the grace of God and His holy abode, can one take up the practice of Braja-vāsa-sādhanā. One who recognizes this will automatically be humble in the Dham and respectful to all entities living there, whether they are visitors, or ordinary apparently materialistic people or not.

This is a theme in Raghunath Das Goswami's writing as well.


na cānyatra kṣetre hari-tanu-sanāthe'pi sujanād
rasāsvādaṁ premnā dadhad api vasāmi kṣaṇam api
samaṁ tv etad grāmyāvalibhir abhitanvann api kathāṁ
vidhāsye saṁvāsaṁ vraja-bhuvana eva pratibhavam
I will not live in any other holy place for even a moment, even if there is a deity of Lord Hari there and even if I can lovingly relish transcendental topics of Hari there with great devotees. Instead, I will live in Vraja birth after birth, even if I pass my time speaking nonsense with the ordinary villagers. (Sva-niyama-daśakam 2. See also VMA 2.1)
In other words, when one has complete faith in the Dham, then one has realized that one has to tolerate external inconveniences that are apparently negative to devotion, because the Dham itself is of such supreme benefit to one's spiritual life that even if one resides there passively without any action other than rolling in its dust -- sleeping in the street or under a tree in the Dham -- one is attaining supreme benefit.

Indeed, residence in the Dham is the attainment of perfection, whether one knows it or not. The dust of Vrindavan Dham is the dust of Radharani's lotus feet, which is the magic powder that brings the Supreme Lord Krishna under her control. To take shelter of the Dham is to be under the protection of the Lord's internal potency. It is now, more than ever, simply a matter of seeing what is in front of one's eyes.


yo brahma-rudra-śuka-nārada-bhīṣma-mukhyair
ālakṣito na sahasā puruṣasya tasya |
sadyo-vaśīkaraṇa-cūrṇam ananta-śaktiṁ
taṁ rādhikā-caraṇa-reṇum anusmarāmi ||4||
I constantly meditate on the dust of Shri Radha's feet, which has limitless power, being the magic potion that immediately brings that Purusha who is imperceptible to even such great souls as Brahma, Shiva, Shukadeva, Narada, and Bhishma, under her control. (RRSN 4)
The ability to recognize that all creatures in the Dham, moving or unmoving, are worshipable and the objects of service may, in fact, be the most easily accessible and important service for an aspiring resident of the Dham. Prabodhananda mentions this several times, starting in verses 1.72 and 1.73, and noting that of all the residents of the Dham, those who are most committed to its true purpose are the best objects of such service:


niṣkiñcanān kṛṣṇa-rase nimagnān
mahā-nirīhān jana-saṅga-bhītān |
vṛndāvanasthān vasanāśanādyair
yaḥ sevate’sau vaśayet tad-īśau ||
One who serves those who live in Vrindavan
who are without possessions,
who are immersed in Krishna rasa,
who are desireless
and fearful of the company of the worldly,
by giving them food, clothing and other gifts,
brings its Master and Mistress under his control. (1.74)
Even an ordinary pious life in Vrindavan is of ultimate benefit. Foreign devotees especially should be careful and recognize that they are here by the will of the Divine Couple and their devotees, and that the Indian government may capriciously at any moment remove that privilege. Let us invoke the gratitude of the Divine Couple by serving their servants. Jai Sri Radhe!

Prem Prakash said…
Here's something I keep question through this whole topic. The notion that somehow the physical environment of Vrindavan itself is forever pure and holy. I won't go into the long list of reasons why it appears not to be so. Rather, my question has to do with the notion of a purity that is beyond the ability of a reasonable person to understand, and a healthy person to perceive with the senses. Perhaps my doubt is due to the horrific mis-use of these ideas. In the Vaishnava world, and in other spheres, there is no shortage of foolishness and harm that has been committed by those whose behavior supposedly cannot be evaluated with the mind or senses. I mean, start with ISKCON and the abuse that took place in the land we are to seek refuge, Vrindavan. It's difficult for me to see this activity as Radha's lila.
Saturday, 13 October, 2018