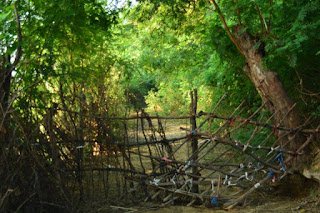 In this and the two previous verses, Prabodhananda Saraswatipada shows his predilection for the mood of the Rādhāvallabhi Sampradāya, of which he must be considered a founding member. Some of the differences with other rasika sampradāyas are discussed here.

Where the dhāma is concerned, those who call themselves followers of the sakhī-bhāva make a distinction between Vrindavan, Vraja and the Kunja, as is clearly stated in these verses, starting with 1.7. The development is given beginning with the standard Upanishad (Mandukya) hierarchy of four stages of consciousness culminating in the turīya state sought for by the Advaitavadins, i.e. Brahman. This is where Prabodhananda, as a sannyasi from Kashi, would have begun his spiritual journey.

Higher than that is Vaikuntha, and the various dhams of Krishna līlā–Dvaraka,/ Mathura, and Vrindavan.

However, Prabodhananda makes a further distinction between Vrindavan, where Krishna’s parents and vātsalya-rasa are dominant, and Vraja, where Krishna engages in his pastimes with the other cowherds and the cows. Where those pastimes are present, Radha and Krishna’s most intimate līlās cannot take place. Therefore those following the sakhī-bhāva have conceived of an abode of the Lord that is exclusively dedicated to the madhura-līlā. This is usually called the Kunja.

Since the Kunja is only possible where Radha and Krishna are present, and where Radha has no competitors, the sakhī-bhāva sampradāyas even consider līlās like the Rāsa to be a part of the Vraja and not the Kunja.

A similar hierarchy can be found in Gaudiya Vaishnavism in the Upadeśāmṛta of Rupa Goswami, which leads to Radha Kund as the most intimate or most secret portion of Vrindavan.

The holy place known as Madhupuri (Mathura) is superior to Vaikuntha, because the Lord appeared there. Superior to Mathura is the transcendental forest of Vrindavan, because of Krishna’s rāsa-līlā. And superior to Vrindavan is Govardhan, for it was raised by Krishna’s divine hand and was the site of various loving pastimes. And, above all these Radha Kund stands supreme, for it is overflooded with the ambrosial nectarean prem of the Lord of Gokula. Where, then, is that intelligent person who is unwilling to serve this divine Radha Kund, which is situated at the foot of Govardhan Hill? (Upadeśāmṛta 9)

Though the words are somewhat different, the principle is the same. In the Kunja, Srimati Radharani is most clearly manifest in her svādhīna-bhartṛkā svarūpa. The mood is that of the nitya-vihāra, where Radha and Krishna are never separated for a moment. There is no viraha. Though Prabodhananda as a sādhaka may express separation from his divine mistress Radha, he never writes of her separation from Krishna.

Just as it is impossible for Sri Sri Radha and Madhava to ever be separated, so in the very same way their rasa and Vrindavan cannot exist independently of each other. (VMA 12.2)

Thus it is established that Radha's kunja and the Divine Couple's nitya-vihāra are the centerpoint of the Dham. To enter here is the prerogative of the sakhis and no one else, and in particular those sakhis who follow in the footsteps of Rupa and Raghunath Das Goswami.

I take shelter of Sri Radhika's handmaids, headed by Rūpa Manjari, who always please their beloved Empress of Vrindavan by offering her betel-leaves, massaging her feet, bringing water and arranging for her meeting with Krishna. These handmaids are even more free from any shyness or retinence than the prāṇa-preṣṭha-sakhīs [like Lalita] even in times of her most intimate play! (Vraja-vilāsa-stava 38 by Raghunath Das Goswami).

VMA 1.9 : Radhika's cottage in the kunj
VMA 1.8 : Vrindavan contains all the Dhams
VMA 1.7 : Vrindavan includes all of Braj
VMA 1.6 : What is it to me if you cannot see Vrindavan's glories?
VMA 1.5 : Take shelter of Vrindavan with all your being
VMA 1.4 : Where all the relishable relationships are found
VMA 1.3 : O Vrindavan! Reveal your true essence to my heart
VMA 1.2 : A humble determination to glorify the Dham
VMA 1.1 : Mangalacharana:  Radha Krishna, Gauranga and the Devotees

1. Glory to the eternally blissful Krsna, resplendent in his heaven of
Gokula. To Him Mukunda dedicates this book called The Necklace of
Immortality.

4. Salutations to my own Master, the blessed Krsnadasa Kaviraja.
Through the power of your compassion, all has been revealed.

5. I offer greetings to the companions of Caitanya.
I am energized by their profound compassion.
Friday, 19 October, 2018

7. Listen closely, for I am going to speak about the principles of Divine Essence (rasa). Only with the help of Experienced Ones (rasikas) can you taste this Divine Essence.

8. Devotees who are Experienced Ones will attain their Inner Body. Their minds are constantly overwhelmed by the experience of Divine Essence.

9. With their minds flooded by experiences of Divine Essence, they float along. Yet such Divine Essence can be generated only with the guidance of Experienced Ones.

13. Divine Love for Krsna is always pure, it is never stained. Get rid of the Vedas and never perform any Vedic rituals!

14. The first step on the path is to seek refuge at the place of the mantra-guru. Ordinary physical birth is from a womb, but this only results in old age and hell!

15. When you are accepted by the guru you will be sheltered by the power of the mantra. Keep the instructions of the guru close to your heart!

16. With great care, the guru who has initiated you with the mantra will guide your practices. You must continue to follow those instructions for as long as you practice!

17. One of those commands is that you associate with a special community of practitioners. Through following such instructions, you will reach the state of
consciousness of the Divine Existence.

Read the rest of the Amrtaratnavali of Mukunda-dasa in 'Tantra in Practice' (Edited by David Gordon White).

THE PATH OF THE MANTRA, THE HIGHEST PATH IS THE HEART PATH

3.49 The supreme mantra that bestows the grace of the Auspicious One (Sri) is the foundation of the highest path (urdhvamnaya). He who knows this as our supreme form is himself Siva.

3.56 Just as the fig tree exists in its subtle form in its incipient seed, so too the three worlds that make up the universe exist within this supreme mantra that
bestows supreme grace.

3.82 He who knows the mantra that bestows the grace of the auspicious one knows all mantras, including those belonging to Siva, Visnu, the Goddess, the sun, Ganapati, and the moon.

An Introduction to the Yoga Philosophy:

Readers studying ‘An Introduction to the Yoga Philosophy’ will also require a copy of ‘The Gheranda Samhita’ by the same Vaishṇava author:

Readers may also wish to acquire a nodding acquaintance with the Siva Samhita translated by the same Vaishṇava author of Bengal (Rai Bahadur Srisa Chandra Vasu).

Thinking of 'go'ing to Vṛndāvana? said…

See page IV of the Foreword of ‘An Introduction to the Yoga Philosophy:’

N.B.* Verse 17 of the Amrtaratnavali:

“One of those commands is that you associate with a special community of practitioners. Through following such instructions, you will reach the state of consciousness of the Divine Existence.”

Anonymous said…
For all readers wishing to 'understand' the term tantra:

to get through, attain an end or aim, live through ( a definite period ), study to the end, RV. etc.