VMA 1.8 : Vrindavan contains all the Dhams 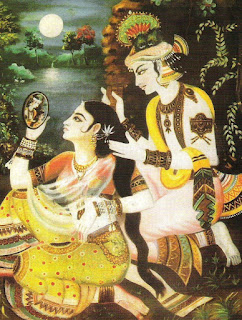 Within this abode of Vrindavan you can find
the gross, the subtle, the causal,
and the fourth state of consciousness, Brahman;
you can find Vaikuntha, Dwaraka and the birthplace, Mathura;
you can find the Vrindavan of Krishna’s pasturing fields
and his play garden with the gopis. (1.8)

This hierarchy of spiritual abodes corresponds to the concept of Radha and Krishna as the supreme form of the Divinity. In order to understand this verse properly, one will have had to read through all the shastras, especially Kṛṣṇa-sandarbha. and the two Bhāgavatāmṛtas. The acharyas are all concerned with hierarchies. Although it is understood that everyone is at their own level of qualification and cannot exceed that, still the search for the Absolute Truth automatically indicates that one must compare and contrast, evaluate different experiences and establish as objectively as possible their superiority and inferiority.

Though for each person, the rasa that they favour is the best of all for them, if one judges from a non-biased perspective then one can see there is superiority and inferiority. (2.8.83)

Even though each of the rasas has a special joy-giving flavor that is not present in the preceding ones, one or the other mood or sthāyi-bhāva will appear more relishable to each individual based on their personal character or tendencies. (CC 2.8.84 BRS 2.5.38)

So the idea here is that in order to establish a hierarchy, one has to see how the "higher" includes the "former." Whatever essential virtue or relish exists in material pleasures of tamas must also be present in rajas and sattva. That virtue must also be present in liberation, and the virtues of liberation musst be present in bhakti. And then one can establish a hierarchy in devotion, first bv understanding the difference between  also by inquiring into the difference between aiśvarya and mādhurya.

This is, in fact, an inquiry into love. In the Vaishnava analysis, rasa means love, and Krishna is the epitome of that virtue.

Though according to theological doctrine, Krishna and Narayan, the husband of Lakshmi, are not different from one another, the form of Krishna is superior when analyzed from the point of view of divine sentiment. This is the conclusion based on the analysis of divine sentiment. (BRS 1.2.59)

This measuring stick is one of love, which is always greater in mādhurya than aiśvarya, must even be applied within Krishna's own different manifestations in Vrindavan, Mathura and Dwaraka. And so the Vaishnava poets have all concluded that the greater the intimacy with God, the greater the sense of identity, of absolute absorption, is the greatest. And it is this absolute absorption that proves distinguishes one level of prema from another. And it is this all overpowering absorption in the taste of love that makes one indifferent to all others.

Although sense gratification may be stopped by a sādhaka who still identifies with the body, the taste for it does not stop. The taste for sense enjoyment can only be stopped when one has seen something greater. (Gita, 2.59)

Here in this verse, though the specific context is material pleasures, and the spiritual taste that puts an end to the taste for material sense gratification is not differentiated, the same principal applies in the hierarchy of spiritual tastes.


Since all experience is subjective and based in our individual desires, a certain relativism is necessary and we therefore are warned not to judge. After all, whatever our beliefs, in terms of practice we are all struggling with the same "enemies" -- lust, greed, anger, envy, intoxication, and bewilderment. The biggest flaw in religion is to think that the concept of divinity that one has adopted gives one a free-out-of-karma card. Or that "my concept of God outweighs my character flaws to such an extent that I can find fault with others and blame it on their theology."

This is where the relation of humility to spiritual experience comes in. Sanatan Goswami says in two of the most important verses that he ever wrote:

The supreme humility arises with the complete maturation of love, as was shown by the women of Braj in Krishna's absence. The full ripening of humility results in the limitless expansion of love, thus it may be said that there is a mutual cause-effect relationship between the two. (2.5.224-225)

The nature of love is such that wherever there is a relation of love, the devotee thinks that I do not have even a drop of love for Krishna. (CC 2.20.28)

It is one of the greatest paradoxes in spiritual life and one that many find objectionable. In a world where success depends on self-aggrandizement, how can one attain the highest thing by considering oneself to be the lowest. And how is it possible to entertain these two ideas simultaneously? The answer is that when one knows a higher taste through whatever experience one has, he recognizes its absence when it goes. And then, the aspirant is faced with the problem of where he went wrong, for the fault cannot reside in God. And this is the humility that attracts God.


Each Dham is the environment perfectly appropriate for Krishna to relish each of the rasas. Therefore Prabodhananda identifies Vrindavan as principally divided into three domains. There is the goṣṭha, where Krishna enjoys his relationships with the cowherds and his parents, etc.; then there is the vana, which is where he has his pastimes such as the Rasa-lila with numerous gopis, and the innermost sanctum sanctorum is the kunja, which is reserved for his loving affairs with Radha exclusively. The kunja is not mentioned in this verse, but will be glorified in the next verse.

Anonymous said…
Could the word "kunj" be a vestigial word (with an esoteric meaning) from a Buddhist past?

The 'Kunje Gyalpo Tantra' (The chief Dzogchen tantra of the Mind):

Jagadananda Das said…
I really think not. but interesting

Does anyone know of a link to a digital copy of the Vivarta-vilāsa of Ākiñcana-dāsa?

It was available in print as:

Selected Aspects of the Textual Studies on the Vaiṣṇava Sahajiyā Tradition in Medieval Bengal (Robert Czyżykowski):

An overview of the Sahajiya tantric traditions of northeastern India. These ranged from Buddhist traditions during the Pala and Sena eras (8th through 12th centuries), up through Vaisnava Hindu lineages which flourished from the 16th through 19th centuries: