VMA 1.74: Serve those who live in Vrindavan, absorbed in Krishna rasa 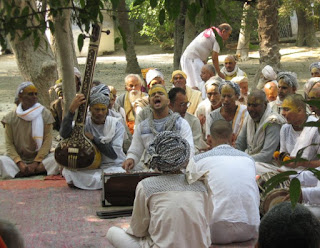 One who serves those who live in Vrindavan
who are without possessions,
who are immersed in Krishna rasa,
who are desireless
and fearful of the company of materialists,
giving them food, clothing and other gifts,
brings the Master and Mistress of the Dham
under his control.

In the previous verse, Prabodhananda spoke of serving any resident of the Dham and facilitating residence for anyone at any level of spiritual achievement or even sincerity. Here, the Vaishnava resident of the Dham who is a sādhaka is given particular importance. In the previous verse it was simply stated that one would attain rati or bhāva for Krishna, the/lover of Radha. Here it is stated that Radha and Krishna, the Divine Couple, master and mistress of Vrindavan would be brought under control. And why not, Krishna is only accessible to those who possess only him and nothing else.

The man whose intoxication is constantly increasing because of high birth, wealth, education, or beauty, is incapable of praying to you, of calling out to you with complete sincerity, for you are accessible only to those who have nothing else in this world. (1.8.26)

Prema is defined as a sense of possessiveness or proprietorship that is directed towards God and nothing else.

Devotion (rati) is called prema by great persons like Bhishma, Prahlad, Uddhava and Narada when it is accompanied by feelings of possessiveness towards Vishnu that is devoid of any such feelings towards anything else. (BRS 1.4.2)

So this is the primary qualification of the devotee living in Vrindavan that Prabodhananda suggests we should seek out as an object of service. Naturally, when one has prema, then this means that he is immersed in Krishna rasa. And that is specified as the one wealth that one should seek out -- such a one who is immersed in the ocean of delight that is devotion to the Lord,

O friend, if you should find it anywhere,
that heart absorbed in Krishna rasa so rare,
be quick to buy, how much the soul’s in need!
In that bazaar is posted just one price;
millions of pious works will not suffice,
the cost is to be paid in coins of greed.
(Padyāvalī 14. Also quoted at CC, 2.8.11)

Nirīha means without action or without desire. A devotee at this stage, as we have already seen, is reluctant to engage in ambitious projects because these will result in having to deal with money and materialistic people and distract from his absorption in Hari-kathā. He would prefer to find close companionship with a few other rasikas and not become distracted by projects that lead away from such absorption. And this is also why he fears the association of mundane persons. In the Gītā, Krishna says that a sign of knowledge is a preference for isolation from the world, vivikta-deśa-sevitvam aratir jana-saṁsadi. Even though it is said that sankirtan, or congregational chanting of the Holy Names, is the yuga-dharma, meaning that association with devotees is more important than isolation, such association should be controlled, just as Mahaprabhu did in Srivasa Angan or the Gambhira.

This is particularly so in Vrindavan. In fact, as one progresses in devotional service, it usually becomes more and more difficult to find the companionship of people whose level of understanding is compatible with one’s own. This is why advanced bhajanānandis tend to gravitate to holy places like Vrindavan where they know they can find other such persons. It is also why Vrindavan is necessary, as a refuge or sanctuary for those who can dedicate themselves to the cultivation of the highest reaches of bhakti without distraction, and where others can come to find them, like travelers in a desert coming to an oasis. The Dham is the world’s oasis.

Thus the preservation of the Dham as a human sanctuary, as Sewak Sharanji called it, is an absolute necessity for human civilization. Anyone who serves the elevated and saintly devotees in the Dham will be blessed by the Lord and Lady of the Dham, of this there can be no doubt.

Some may object or fear that there are cheats and charlatans disguising themselves in this way to deceive the pious householders who give in charity. It is no doubt true that the majority of those who dress as saints are not saints all the way through, but in the previous verse it was already stated that even the charlatans in Vrindavan are worthy of charitable service. Better to cast the net too wide than not wide enough, and certainly one should not be driven by envy to exclude anyone. 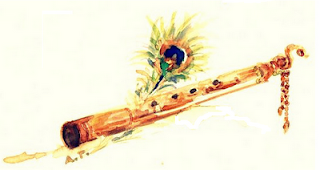 It has not been my habit to ask for charity for myself or for others, but over the years I have either started or participated in projects in the Dham where money is needed. If you have any faith in the subject matter of this and the previous verses of Vrindavana-mahimamrita, I humbly ask you to consider helping with any one of them.

I will give a short list here and ask for those who are charitably disposed and would like to help these various services to progress to please get in touch with me at the email for this blog "premaprayojan" at google mail to find out the best way to send donations.

Of course, better than money would be committed and competent volunteers who are interested in doing the service in any of the above areas directly... though it should be remembered all the above services require advanced education in shastra as well as bhajana-nishtha, or commitment to spiritual practice. All the above are great opportunities to advance in those aspects of devotional culture. But as Prabodhananda Saraswati is saying here, if you cannot do it yourself, help others to do it. Through those you help, you will help many, many others.