What I saw on my way to Radha Kund 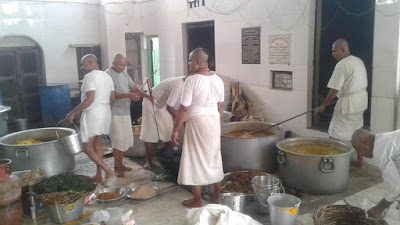 There is an old children's book by Dr. Seuss, To think that I saw it on Mulberry Street, where a child imagines fabulous events on the quiet neighborhood street he has to follow to go to school. I wasn't making anything up, but it seemed that there were bands and parades, camel-drawn carts and tractors pulling trailers full of Brijbasis and all manner of things that would be strange if one was not from here. But ever since I got back from Bengal I have been in a kind of limbo in the Jiva Institute, living in Braj but almost not here at all, in a strange paradoxical way. So this was really the first time out of the confines of Jiva since I got here more than a month ago. I didn't take any pictures. I was trying to take brain pictures.


On Dwadashi I went to Radha Kund
I saw a crowded street of people flowing in both directions
and a constant stream of vehicles
the mood was joyous. The month is Karttik.
There are Radhe Shyam songs in the air from morning to night.

In front of Krishna Balaram
I saw a long procession of Warkaris
with their white Congressi caps,
singing to Vitthal and leading their gurus
who sat royally in a carriage.

I saw the Prem Mandir
and the new parking lot with lots of touts,

I saw a motorcycle with two brightly
yellow and red veiled women
sitting sidesaddle and holding a baby.
And I saw it again, and again
only the colors of the cloth
and the ages of the women changing.

I saw the horribly planned interchange for the NH2
at Chattikara.
I saw the busy Chattikara market,
a little less muddy and grimy than usual,
but more and more cars vying for space
with the shoppers.

And then we crossed the flyover into Braj.
Open fields and gobar storage chatris,
the road lined with eucalyptus and neem trees,
and those tall tall grasses that used to follow
the Vrindavan panchakosi parikrama marg.
Buffalo sitting peacefully under shady trees chewing cud.
In Ral, it was cows. It seemed every house had cows.

The rickshaw stopped I was barely noticing
so blinded I was with the green fields and
Brajavasis and cows and fields of rice stumps
and watching the slowly changing but still unchanged
Braj
when suddenly Subrata from Kolkata was standing there
his whole family waving from another rickshaw.
"I am everywhere," he laughed.

He took me to the Radha Raman Bhajan Ashram.
and introduced me to Krishna Charan Das Baba,
a pandit whom I must one day meet properly
but it is Dwadashi and everywhere the Mahants
are busy with Vaishnava seva.

The Parikrama Marg is crowded with devotees
another constant flow, always some doing dandauti.
Govardhan Parikrama is a joyous penance,
I almost fell into the stream, but decided against it.

I saw Deena Bandhu doing parikrama.
with a large party of Iskcon devotees.
Niyam Seva is here, the month of the Gaudyas,
the month of Radha Kund and Govardhan,
of butter and of cows and cowherds.

I saw Mahanidhi Swami in his bright white bliss,
glowing with decades of Radha Kund residence.
We managed to talk only a few moments
because there were too many comings and goings,
but in this our first meeting there was
an effulgence of friendship and mutual respect.

I went and paid my obeisances to Raghunath Das
where big cauldrons were being
stirred by Babajis in T-shirts and rolled-up bahirvasas.
I paid obeisance to the babas doing Harinam
and to Jahnava Mata
and then bathed in the Kund in a state of rapture.

I walked around the Kunds
past the rows and rows of tulasi bead shops
in love with everything;
even the young men on motorcycles
blaring untidily through the crowds
barely pierced the bubble of my enchantment.

I had Prasad at the Bhajan Ashram
and then walked part of the way to Ral,
in the sun, my still wet gamcha wrapped around my head,
before taking a rickshaw.

I am in Vrindavan, but I am still not here yet,
each day part of the journey getting there. 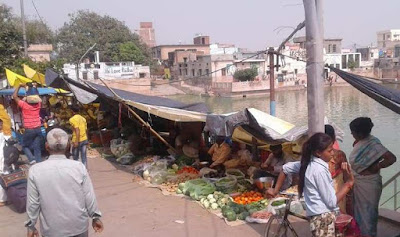 Prem Prakash said…
Beautiful. This posts are often my favorites; the first person accounts of what it's like to be in love with Radha-Krishna I'm somewhat glad there are no photos. In a way, this encourages the reader to go within and find his own imagery.
Wednesday, 24 October, 2018

Unknown said…
he mahodaya, Thanks for bringing vraja to us. Just commenting to wish you well. I still remember our times at JIVA in shastra-vichara. All glories to philia-bhava. Ys, kutarkika
Thursday, 25 October, 2018