VMA 1.3 : O Vrindavan! Reveal your true essence to my heart! 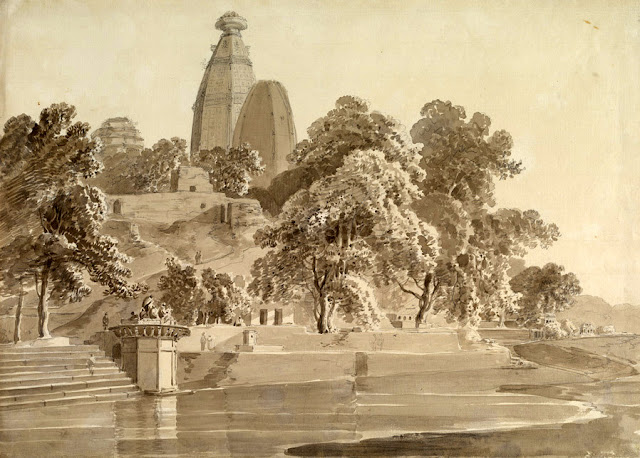 O Vrindavan! Land of wondrous nature!
Reveal your true essence to my heart,
with all its esoteric secrets,
the spells that lead to supreme bliss.

The Upanishads themselves are too shy
to describe the full nectar of Brahman,
and so say, “but not this, not this!”
So what hope have we to tell
who or what you are?


As Prabodhananda embarks on the journey -- a lifelong commitment to glorifying Vrindavan until his dying day -- he continues to reflects on the nature of his task. How can a mere mortal limited by time and space, bodily consciousness and conditioning, enter into this inconceivable transcendental realm of God's own abode? The only recourse is to beg for the Dham's mercy itself. As Prabodhananda wrote in one of the concluding verses of the Sudhā-nidhi, the grace of the Dham is essential for completing and perfecting the culture of devotion to the Divine Couple.

How great is Radha,
whose glories are so far beyond the Vedas!
And how glorious is Krishna,
whose single abode is in the space between her breasts!
And how low am I, alas!
such a fallen creature addicted to sinful life!
If their names manifest on my lips,
it is only due to the glory of this land of Vrindavan. (RRSN 261)

In the Bhagavat-sandarbha, Srila Jiva Goswami discusses at length the prayers of the personified Upanishads from the 87th chapter of Canto 10. The question that starts the chapter is, “If Brahman is ineffable and beyond the capacity of words to express, then how can the Vedic texts themselves describe It?”

Sri Jiva concludes that it is possible, since the words that describe the Lord are a part of his energy and so can be given the capacity to indicate him, even if the Lord is unlimited and beyond the capacity of the mind of an individual soul to fully grasp him. He also says that even the negative statements like neti neti, the negative path to the Absolute, are in fact a process of describing the Lord. What He is not also indicates what He is. It is through the Vedantic process of negation that we come to faith in the Supreme Person, his divine pastimes and associates and Abode.

The negation that results in Brahman has not gone far enough. Prabodhananda Saraswati is an acharya of the Vedanta who has learned to go beyond the intellectual and mental processes of the jñāna-mārga and has concluded that only Prema is the goal and means of entering into the full glory of God.

Of course, the real point is that the personal form of God, his name, his abode, his pastimes, all exist specifically in order to be accessible to the individual souls. They would have no purpose, indeed God Himself would have no purpose, if there was no one to relish his blissful existence in all its infinite manifestations and with its divine center in Vrindavan, the abode of love as embodied in the form of Radha and Krishna.

So here Prabodhananda ascribes the Upanishads’ silence about the glories of Vrindavan and Radha Krishna’s līlā to shyness (hriyā). In a later verse, he says that they all became cows in Vrindavan so they could relish the grasses here, just like the Bhāgavatam says that the great sages all became birds to incessantly sing hymns in his glory.

VMA 1.10 : More glories of Radharani's kunj
VMA 1.9 : Radhika's cottage in the kunj
VMA 1.8 : Vrindavan contains all the Dhams
VMA 1.7 : Vrindavan includes all of Braj
VMA 1.6 : What is it to me if you cannot see Vrindavan's glories?
VMA 1.5 : Take shelter of Vrindavan with all your being
VMA 1.4 : Where all the relishable relationships are found
VMA 1.3 : O Vrindavan! Reveal your true essence to my heart
VMA 1.2 : Prabodhananda's humble determination to glorify the Dham
VMA 1.1 :
Dham kripa UPanishads Vrindavana-mahimamrita

from Srila Narottama das Thakur’s Sri Prema-bhakti-candrikā on the top of your new-look blog is truly splendid, there is so much more to this passage than you may think (especially when one’s mind is devoted to the task of its proper translation).

"Into the oblation-eating belly of one’s consciousness, all existing things are hurled suddenly; they sacrifice their portion of differentiation, consuming it by fire with their own energy. When the fragmentation of existing things is dissolved … the divine sense-energies of consciousness eat [feast on and enjoy] the universe that has become the nectar of immortality. Feeling satisfied, these deities rest, intertwining with Divine Bhairava, the Sky of Consciousness, who dwells in the secret space of the full heart of their selves."

The oblation is the mind sacrificed in the fire of yajña.

The full heart is the unbounded, infinite light (prakāśa).

See page 11, Born of the Yoginī’s Heart: Reflections on the Nature of Meditation and Ritual in Abhinavagupta’s Paratrisika-laghuvrtti.

(Toggle Fullscreen to read the above link)

Come to the bossom of Rādhā in Vṛndāvana:

The way of nāḍī-calana is called rebirth; the way of calana-nāḍī [leads to] the supreme isolation and release.

The way of Sadāśiva is regarded as nādī-calana; the way of the Supreme [Śiva] is considered calana-nāḍī.

Readers may wish to acquire a nodding acquaintance with this: