VMA 1.95: Vrindavan bestows a sphūrti of her internal svarūpa 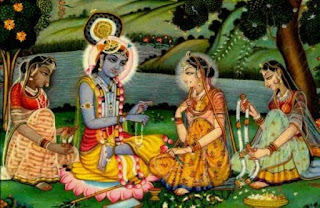 Noticing his own blue effulgence
reflected on Radha's breasts,
the Beloved thought it to be a blue bodice;
he tried to remove it, but could not,
causing him great wonder.

As Sri Radhika lies on a couch
in the freshly decorated kunja,
she makes fun of him, while her friends stand outside,
bursting with laughter, everyone enjoying the joke.
May those joking words bring me joy also.

And with that sudden recollection of Vrindavan's merciful protection, Prabodhananda has a vision of the līlā. The Dham chooses to reveal her inner self to the one who has taken shelter of her. The Dham is the treasure-box in which the jewel of the līlā is hidden by the curtain of Yogamaya.

This is the nature of most of Prabodhananda's writing, at least in his stotra-kāvyas. There is no seeming overall structure or organizing principle, each verse or group of verses appears disconnected from the previous and the following. There seems to be no overall narrative, just a collection of images or vignettes.

Great commentators like Chaitanya Das or Krishnadas Kaviraj writing on Kṛṣṇa-karṇāmṛta, or Ananta Das Babaji, the Mahanta of Radha Kund, when commenting on books like Utkalikā-vallarī, Rādhā-rasa-sudhā-nidhi or Vilāpa-kusumāñjali also routinely assess whether a verse is being spoken from the siddha or the sādhaka platform. They see these visions of the nitya-līlā as sphūrtis, or sudden visions, inspirations or even hallucinations.

After such intense and urgent prayers to the Dham, after praying fervently for her mercy, here gets his reward and sees a līlā manifest before him, as if real..

Radharani then makes fun of Krishna and the gopis who are sitting outside the kunja and are able to hear everything burst into laughter. There are six kinds of laughter, according to Bhakti-rasāmṛta-sindhu (4.1.14-28): smita, hasita, vihasita, avahasita, apahasita and atihasita. The six kinds of laughter are progressive, going from a simple smile, to laughter in which the teeth become visible, then adding flared nostrils and squinted eyes, tears in the eyes and shaking shoulders, to atihasita, which adds clapping and much moving about of the limbs. So the sakhis in this scene are standing outside the kunja, but they can hear Radha making fun of Krishna and are getting a big kick out of it, roaring with laughter.

So how can Prabodhananda have entry here?

This [madhura] rasa, despite being extremely extensive in its parts is only presented here in abbreviated form because it is (1) unsuitable for those who are turned away from it (nivṛtta) ; (2) it is difficult to comprehend (durūha) and (3) is esoteric (rahasya). (BRS 3.5.2)

It sounds as though Rupa Goswami is saying that anyone in the renounced order (nivṛtta), i.e., following the nivṛtti-mārga, is not eligible for the spiritual madhura-rasa. But this is clarified by the commentators to mean those who are indifferent or opposed to the spiritual ujjvala-rasa of the Bhāgavata because they think it is coming from the same physically instinctual source as its material version. Because they are inimical to the material śṛṅgāra-rasa, i.e., they recognize that the desire for loving sexual intimacy is the source of all bondage, they also are inimical to the pure eros of the spiritual realm, to which they apply the same logic. As long as this misunderstanding is there, for as long as one does not understand the relations between the material desire and the prema eros of Vrindavan, one will not be able to enter it fully.

Those who cannot make a distinction between material and spiritual eros are unable to enjoy this rasa. They are of two kinds: either disturbed by material sexual desires or repulsed by them. To get any pleasure out of Radha and Krishna's madhura-rasa, one must be psychologically prepared for it through the training of the identity-self, which is otherwise known as sakhi-bhāva or manjari-bhāva.

As long as one thinks like a man one will not enter therein. As long as one is a man fantasizing about the fulfillment of his desires in the way that only Krishna can, however subtly, this whole thing will be a mystery.

This is the inner eligibility.

Anonymous said…
For those also trying to understand new terms introduced in this blog posting and attempting to translate and understand them in relation to practice; see:

Remember, we are talking about energies; a good maxim of practice is:

A "Glossary of Terms" for your blog would prove invaluable for readers to reference and further understand what you are imparting.

Yes, one understands its much more work; even short explanations (written on the fly) as you post (added to an alphabeticaly arranged 'Glossary') on your blog would help readers studying your work (yes, through the power of the internet, there are actually people earnestly studying your work (-: ).