VMA 1.4 : Where all the relishable relationships of love of God are experienced 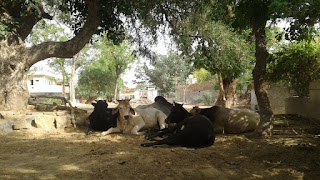 I constantly sing this hymn to Vrindavan
wondrous with the fullness of Radha and Krishna's dalliances,
ever astonishing due to the expanding essence
of their supreme sweetness,
the very highest limit of the various rasas Hari enjoys.

The divine land of Vrindavan is unlimited in its good fortune,
in that it is the only place where can be experienced
all the relishable relationships of Love of God,
the glories of which are incomprehensible to Shiva or Shesha
or any of the other gods of this world. (1.4)

Vrindavan's glory is that it is the Dham of Radha and Krishna, the scene of this vision of the Supreme Truth embodied as the Divine Couple, the idea of perfection of romantic love. The land is imbued with their presence in memory, which is the most real presence. It is where the human imagination of perfect love is present in every grain of its dust.

This concept of God is the highest limit of wonder. I just read somewhere today that there is an atheism to counter every concept of God, and there is a point to negating defective idols, and what product of the human imagination is not riddled with defects. But who wants to deny the sacred power of Love, the foundational imagining that gives meaning to life?

Radha and Krishna not only symbolize that love, but they are the reality of Love, as it exists everywhere, through all time, in minute or grand manifestations. Vrindavan is the divine land where this idea takes spiritual form and appears to the human eyes in hundreds and thousands of tiny manifestations, as deity forms, but especially in the form of those realized devotees whose hearts have melted with the sweetness of Radha and Krishna's love.

This can only be understood if we meditate at length on the Upanishad verse, raso vai sah. So we praise Vrindavan Dham in order to remember the glories of Radha and Krishna. And we serve Vrindavan Dham so that those glories will manifest in our hearts and in the hearts of others.

In this verse we will find many of Prabodhananda Saraswatipada's favorite words, which are repeated  over and over again in his works. In the previous verse he complained that words cannot reach this realm and indeed Prabodhananda is tested in his capacity as a poet, being forced to repeat again and again -- camatkāra, mahā-mādhurī-sāra, camatkṛti, rasotkarṣa, parā kāṣṭhā, divya, rasaika-ramya, etc. In particular the words camatkāra, sāra and rasa are significant.

Vishwanath Kaviraj, the author of Sāhitya-darpaṇa, writes that the essence of rasa is wonder, quoting Dharmadatta.

The essence of rasa is perceived everywhere as amazement. Therefore the rasa of wonder can be taken as the essence of rasa everywhere. So the accomplished poet Narayan Kaviraj [Vishwanath's great-great-father] says that adbhuta is the principal rasa. (Sāhitya-darpaṇa 3.2-3 vṛtti.)

[See here for a full discussion of these Sāhitya-darpaṇa verses and the corresponding verses from Bhakti-rasāmṛta-sindhu.].

Those who follow this blog will have encountered the expression sāra-grāhī, "the seeker of the essence." Prabodhananda Saraswati has searched out the essence and has found it in Vrindavan. In one sense, the Vaishnava concept of rasa is based in the imagination. God is the source of all wonder, all beauty, all perfection. We only perceive that perfection in fragments in this world. Indeed, without the backdrop of imperfection, it is hard to experience perfection as wondrous. In the spiritual world, the sense of wonder is being ever refreshed (nava-navāyamānatvam): that is the nature of the Dham.

The enemy of wonder is boredom or familiarity. So the sādhaka must be careful to concentrate the mind in samādhi at all times, for by concentrating on the Divine Truth of Radha and Krishna, by remembering the moment of pure wonder that is at the center of all spiritual experience, by holding on to that and never forgetting it, one will be able to remain deep in the ocean of prema-rasa always and everywhere.

The portion of this verse that states that Vrindavan's glories are beyond Sesha and Isha (Shiva) is an other common theme in Prabodhananda's writing. I am reminded of the first time I came across this particular world play, from Rupa Goswami's Smaraṇa-maṅgala-stotram and quoted at the very beginning of Govinda-līlāmṛta (1.3). This verses is also an appropriate reminder of the rāgānugā path, which is the path taught by Prabodhananda Saraswati, and therefore not surprisingly shares this idea

The sādhya (ultimate goal) of spiritual practices is prema-sevā to Radha’s prāṇa-bandhu (“life-love”), Krishna. Although such prema-sevā is unknown to Brahma, Shiva or Ananta Sesha, it is available to all who follow in the footsteps of the residents of Braj with a deep hankering. So, as ī now begin to elaborate on this system of service performed mentally (mānasī sevā) by those who travel on the rāgānugā bhakti path, I offer my prostrated pranams to their pastimes that unfold daily in Vraja. (GLA 1.3)

This verses should be memorized and repeated daily at the beginning of their practice by all following the system of līlā-smaraṇa taught by the Gaudiya Goswamis. Jai Radhe!