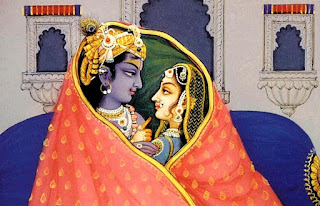 Alas! How shameful!
Although I yearn exclusively
for the feet of Vrindavan's Lord and Lady,
although I have heard the speeches
spoken by the greatest saints,
and although I know that everything in this world
is an obstacle to my attaining the ultimate good,
I still do not take shelter of Sri Vrindavan Dham. (1.99)

Prabodhananda Saraswatipada is now once again talking about the adhikāra for residing in Vrindavan. These are more important than the vairāgya spoken of earlier, even though the spirit of renunciation is present here too. He does this through this dainya-bodhikā vijñapti, or a statement expressing humility and utter dependence on the mercy of the Lord. And that is the point of the verse: despite having all qualifications, without grace of the Dham herself, Vrindavan-vāsa is not possible.

And yet, one must be aware of the qualifications that are really needed for true Vrindavan vāsa.

The first is to have the single-pointed exclusive goal and aspiration of attaining the lotus feet of Vrindavan's Lord and Lady (vṛndāvaneśaika-pada-spṛhā) .

The Bhāgavatam says that one should not renounce material duties until one has faith in the efficacy of hearing about Krishna.

One should continue to engage in prescribed karmas until one has developed detachment from sense pleasure, or until one has awakened faith in hearing narrations about me. [11.20.9]

Such faith is of weak, middle or strong types, according to Rupa Goswami, depending on the degree of faith and knowledge. One who possesses the greatest knowledge and the corresponding strength of faith is called the uttama-adhikārī.

One who is expert in both the scripture and in logical reasoning, who is entirely convinced of the path, is one with mature faith. He is the best adhikārī for the path of devotion. (BRS 1.2.17)

Braja-vāsa is most suited to the uttama-adhikārī because it is meant for one who has come to the conclusion of all the scriptures and no longer has any use for any spiritual instruction other than direct service to Radha and Krishna.

The faith of the uttama-adhikārī is otherwise called niṣṭhā. It is really the starting point of bhajan. After anartha-nivṛtti, when the grosser distractions from bhajan have been removed, then one can understand what is meant by ekāgra-citta, single-pointed determination towards the goal of attaining sevā to the Divine Couple.

And that is to be attained and nourished by hearing from the most advanced rasika devotees. If you know the importance of this, your road to Vrindavan is open. If you can harden your heart, make it harder than a thunderbolt (1.70), to all the pulls of this world, recognizing that they are all obstacles to attaining complete immersion in the Supreme Lord's pastimes with the residents of Braj.

Yet in spite of having all these qualities, something is holding me back, laments Prabodhananda. Why do I still have this weakness that keeps me from carrying out the wishes of my heart? When will Vrindavan Dham be gracious upon me? In the next verse, he concludes the first century by stating his faith in the compassionate nature of Vrindavan, his mother.

Yes, you are right; ईश (īśá) can be masculine, feminine (both) and a noun: