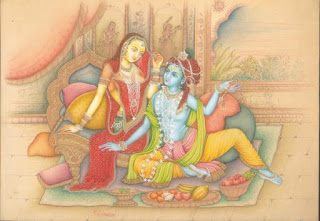 Yesterday I felt a bit of fear as I posted such an intimate pastime of Radha and Krishna. At the same time I had recently been heavily criticized for speaking to unqualified persons about the fragrance of Radha's body, as in the first verse of Rādhā-rasa-sudhā-nidhi.

I bow down to even the direction in which Vrishabhanu Nandini is present, for even Madhusudana, whose characteristics are incomprehensible to the greatest yogis (yogīndra-durgama-gatir madhusūdano'pi), thinks himself to be most fortunate and fulfilled when the glorious, most glorious breezes arising from the playful movement of the hem of her sari come his way. (RRSN 2)

Madhusūdana is a name that has several meanings, including "drinker of honey," which is what a bee is. That is why he is likened to a bee, besides being black, of course. There is plenty of scope for scouring the literature for more comparisons of Krishna to a bee, especially in the Bhāgavatam 10.47, where Radharani's soliloquy to a bee arises on her hearing the gopis lament that just as a bee leaves a flower when it has sucked it dry of honey and goes to another, so does Krishna abandon the gopis after tasting their love.

Motivated friendship toward others is an imitation that lasts only until its purpose has been fulfilled, such as with men who seduce women, or a bee taking honey from the flower. (10.47.6)

The bee metaphors befits the dhīra-lalita leading man, who is our worshipable hero, Krishna. [More reading on the dhīra-lalita : Radha the Empress of Love, O Mind! Meditate on Radha's breasts, More about the two circles.]

In Vrindavan resides an ever-youthful, divine Cupid. His worship is conducted with the kāma-bīja and kāma-gāyatrī mantras. This form of Krishna attracts all creatures whether male or females, moving or non-moving; he even attracts the mundane god of love himself. (CC 2.8.137-138)

Krishna attracts the hearts of all living entities, including himself because he has taken form as the embodiment of the romantic sentiment. Krishna has the character of a dhīra-lalita, the charming lover, whose only business is to engage in amorous sports. (CC 2.8.143, 187)

The dhīra-lalita, the male lead in a romantic comedy, is described by Rupa Goswami as follows:

The charmer is suave, ever youthful, clever in the arts of flirtatious humor, always carefree and usually under his mistress’s thumb. (BRS 2.1.230)

And the example Rupa Goswami gives reveals the same traits as yesterday's verse, and that today: śrī-rādhā-kuca-kamala-koṣa-dvaya-rataṁ. The bee, though it flies from flower to flower, sometimes becomes so enamored of the inexhaustible supplies of honey in the lotus that it becomes entrapped by the petals when they fold closed at night.

Not everyone has the adhikāra for this madhura-rasa, but it is important to recognize that this is the mood at the center of Vrindavan. It is the worshipable mood of all the rasika sampradāyas, and this is what Vrindavan will reveal to the surrendered bhakta who is fortunate to have found the association of rasikas in the Holy Dham.

A note about the style. Prabodhananda's style is easily recognizable, which seems to be the best evidence that he is the author of the Rādhā-rasa-sudhā-nidhi.

May my mind take pleasure in Sri Radha's forest playground,
which is filled with flower vines
whose twigs have been touched by Radha's hands,
whose sweet sites have been trod and marked by Radha's feet
and where the birds become intoxicated singing Radha's glories. (RRSN 13)