VMA 1.94 : Vrindavan protects those who desire to live there 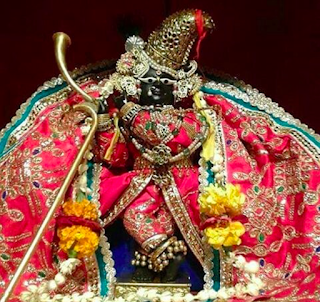 "The ultimate goal I desire in my life is to relish the taste
of Radha and Krishna's most confidential service.
When will I ever give up everything and go
to live permanently in Vrindavan?"

If such a hope should even appear in the speech
of one addicted to the affairs of household life,
Vrindavan will save such a person
by giving them detachment.

After putting so much emphasis on the nivṛtti-mārga, Prabodhananda finally expresses his opinion of the pravṛtti-mārga. Is there no redemption for the person trapped in the householder life?

Prabodhananda gives solace to the devoted householder to let him know that Vrindavan protects even those with only the slightest connection to her.

The Bhāgavata says that there is only one reason for renunciation and that is faith.

One should continue to engage in prescribed karmas and not abandon them until one has awakened faith in hearing narrations about me. [11.20.9]

Faith in this case would mean more than the simple faith with which one begins the practice of bhakti. Truly one needs to have made progress in both intellectual understanding of bhakti, whereby one gains faith and is thus able to apply him or herself to the process and thereby enhance the taste for bhakti, in particular for hearing about the lilas of Radha and Krishna in Vrindavan.

Firm commitment to acting according to one's own level of attainment is called virtue. The opposite is called vice. This is the long and short of virtue and vice. (11.21.2)

There are ways of making the grihastha life conducive to spiritual progress. But they are ultimately not different from those of the renouncer who has given up everything to be able to engage in direct bhakti-yoga with as little interference from the "world" as possible.

In other words, if you engage in bhakti-yoga properly, then you will wish you could engage in it all the time. You will lament that you cannot give yourself to the practices of bhakti-yoga completely. You will look for ways to enhance your practice of bhakti-yoga by talking about it to others, by seeking friendships that are positive for it.

All this is in the nature of practice in separation. Separation means not being allowed to have the thing you crave. Its purpose is to increase your craving. It is to have received a taste of such great intensity that it meant total absorption, and feeling the inability to return to that state of perfect samādhi.

This external situation by its very nature will result in the creation of an environment that reflects the state of one's heart and is at the same time conducive to remembering Radha and Krishna, the sakhis and Vrindavan Dham.

The person who through some good fortune comes to have faith in discussions about me, if he is neither too detached nor too attached, then he becomes eligible for the practice of bhakti-yoga, which will give him all perfections. [11.20.8]

This verse gives the more general concept of faith. But the presence of faith in a non-conducive atmosphere quickly leads to disinterest in those whose worldliness distracts one from the goal.

Vrindavan Dham is not so cheap a gift, not so easily purchasable a ware. But one who has made the spiritual commitment to Vrindavan's mood will always receive her grace. She reveals her glories to one who has mentally taken shelter of her. She does not abandon her devotee.


One should hanker for Braja-vasa. There are different kinds of prayers: vijñapti, āśā-bandha and lālasā-mayī kinds of prayers. Of these āśā-bandha is a sign of bhāva-bhakti (BRS 1.3.25). The word āśā means hope, and bandha means binding. So when one has an impossible hope but cannot give it up, that is called āśā-bandha, like in this prayer by Rupa Goswami:

O Mukunda, giver of liberation!
Who in the world is there with the courage
to pray for the gift of sacred love,
of which the slightest manifestation,
when brushing against the minds of the great sages,
makes them forget the happiness of liberation?

My prayer therefore to you is this:
that I should simply desire for such prema,
and that this desire should increase forever,
in this world, birth after birth.
(Rūpa Gosvāmī, Aṣṭādaśa-chanda, Vastra-haraṇa, 2)

Rupa's verse is almost like he is trying to play a trick on Krishna. "You cannot refuse me this, O Mukunda! I know that it is said Mukunda gives liberation easily, but not bhakti-yoga, so how can I ask for something that is so valuable, and for which I know I am certainly not worthy?

But the thing about bhakti is that the desire for it IS it. The feeling of hankering, of longing, of not having what you so fervently desire, and perhaps knowing the impossibility of attaining it and yet not being able to give it up. That itself is actually bhakti.

And the Mayavadi may say, "You are crazy to call that liberation" but they simply are not rasikas, they do not know the pleasure of longing for this most perfect prema. Only if there is longing can it go on forever.

In bhakti there is no end. Because the ways of God's love are beyond understanding.