VMA 1.7 : Vrindavan includes all of Braj 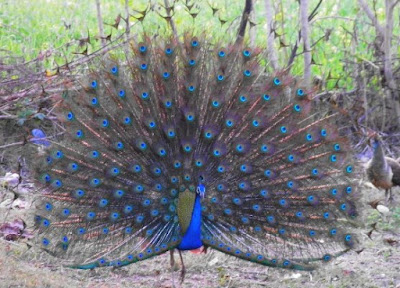 I meditate on Vrindavan,
where you can hear the clear sound of the koil’s call,
the wafting tones of the flute’s sweet song,
watch the peacocks display their frantic dance beneath the branches,
see the trees eagerly embraced by the vines,
the delightful bowers rendered colorful
by various birds and beasts,
and beautified by many divine lakes and streams,
as well as Govardhan, the best of mountains. (1.7)

From this statement it is clear that for Prabodhananda, Vrindavan includes all of Braj with Govardhan, etc. This is indicated by Shukadeva's verse describing the move of the cowherd community from Gokul to Vrindavan.


O King, seeing Vindavan, Govardhan Hill, and the banks of Yamuna, a supreme pleasure arose in both Balaram and Krishna. (10.11.36)

Nānā-divya-saraḥ-sarit refers not just to the Yamuna, but includes Manasa Ganga, Radha Kund, Shyam Kund, and all the other water bodies in Braj. Radha and Krishna’s Yoga Peeth is in Vrindavan, so it is the true center of Braj Dham. Radha Kund is the other pole of the Divine Couple’s pastimes. In the aṣṭa-kāla-līlā as described in Govinda-līlāmṛta, Radha and Krishna meet at midday in Radha Kund and at night for Rāsa-līlā by the banks of the Yamuna in Vrindavan.

Of course, from the Upadeśāmṛta, we know that Rupa Goswami makes a hierarchy that places Radha Kund at the pinnacle of all the holy places of Braj. And yet, all the Goswamis and Rasik Sants from all sampradāyas chose to make their headquarters in Vrindavan. Even now, building of temples and preaching is most prominent in Vrindavan, whereas Radha Kund is a place that is for those who have dedicated themselves to a more intense spiritual practice of smaran and kirtan.

In other words, Vrindavan as it exists today and as it seems the Goswamis intended it, serves to attract people to Krishna’s abode through the external forms of bhakti, while Radha Kund is for those who have found the inner essence of that bhakti.


The glories of Vrindavan are found in all the stories of Krishna, even in the earliest texts. But these descriptions of the Dham reach their pinnacle in the Bhagavatam, which then inspires all the later meditations and extended descriptions of the Abode.

From the time of Krishna's birth, Nanda Mahārāja’s domain was filled with prosperity, O king. Because it possessed the quality of being Hari’s own dwelling place, it also became the pleasure garden of the Goddess of Fortune. (SB 10.5.18) KS 137

The gopis begin their famous song to Krishna on the night of the Rasa Dance with the same statement:

Here, the good fortune of Vrindavan, the goddess of fortune in Braj is Radha herself. But ultimately one cannot separate the four tattvas of Vrindavan : The Dham is never separate from Radha and Krishna and they are never separate from the Dham. And the sakhis, the Divine Couple's loving partners in the rasa, round out the picture of the inner sanctum of the Spiritual World.

But here Lakshmi only means the Goddess of Nature. Vrindavan's Lakshmi is really Vrinda Devi, who is the orchestrator of the environment in which the Divine Couple can most fully relish the perfection of their loving activities. No other abode of the Lord is suitable for such pastimes.

The gopis marvel at the natural beauty of the Dham when glorifying Krishna's flute:

O friend! Vrindavan brings glory to the Earth, for it has attained the fortune of being touched by Krishna's lots feet. When the peacocks hear Govinda's flute, they become intoxicated and begin to dance, seeing which makes all the other creatures by Govardhan abandon their other activities to become still and simply watch. (SB 10.21.10)

Vrindavan is the glory of the Earth. The existence of Nature itself is fulfilled when it plays this role of service to the Divine Couples loving dalliances, when it becomes their play garden. In terms of this world, it is the idea environment for human society, living in harmony with nature -- a kind of dream that today's urbanized world has nearly forgotten.