VMA 1.6 : What is it to me if you cannot see Vrindavan's glories? 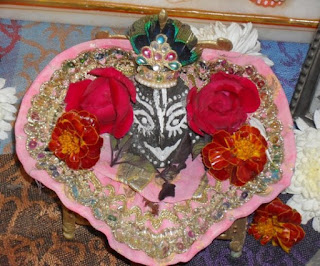 If the Upanishads do not openly establish Vrindavan’s glories,
then what difference does that make to me?
And if the bad faith debaters, fallen into the pit of the scriptures
do not accept them, what is that to me?
And even if those who have directly realized Bhagavan Narayan
do not accept those glories, what is that to me?
Their words may strike my soul as a thousand thunderbolts,
but I will not move an inch from Vrindavan. (1.6)

O Bhaktas! Just wrap Prabodhananda’s language around you like a protective garment. Slip into it like a comfortable cloak. Listen to him come back to those familiar turns of phrase and poetic tropes, that niṣṭhā, that indifference to all philosophical debates that deny the reality of his mystic vision.

That attempt to outdo himself (because there are no competitors really doing the same thing) in stating what odds he will overcome to achieve his goal, his dedication to that supreme devotion to Radha’s service in Vrindavan.

Let yourself be carried away, listen to his unique style and language and let him transport you to the impeccable, glowing, effulgent Vrindavan of his transcendent vision. Let his enthusiasm and love for Vrindavan wash over you and wash you away. You cannot read verses like this without becoming infused with enthusiasm for devotion to the Dham.


For those on the vidhi-mārga, it is often difficult to understand what is meant by rāgānugā-bhakti. In the general prescription of bhakti in the Bhakti-rasāmṛta-sindhu, Rupa Goswami describes the eligibility of the practitioner as one who has either strong, middling or weak faith in service to Krishna, but also has knowledge of scripture and logical reasoning. In Caitanya-caritāmṛta and elsewhere faith is also simply described as a belief in the scriptures, Logic is necessary to be able to discriminate between the various scriptures and to assess which passages are related to the Ultimate Concern and which are not, for even within the Bhāgavatam, which is the highest authority for Gaudiya Vaishnavas, not all instructions carry equal weight. The Sandarbhas of Jiva Goswami deliberately serve this function of assessing the relative merits of the statements in that authoritative scripture.

But logical reasoning also has its limitations, especially when it comes to bhakti. Rupa Goswami states this almost at the very beginning of the Bhakti-rasāmṛta-sindhu,

Even a little taste for devotion will reveal its secrets. Logical argumentation on its own will not, since it has no firm basis. (1.1.45)

A philosophical position that is asserted even with meticulous attention by expert logicians can be shown to be otherwise by those who are even more clever. (1.1.46)

Here Sri Rupa makes it clear that for all devotees, whether on the vidhi-mārga or the rāga-mārga, taste (ruci) is the most important factor. In fact, one's faith and reasoning will follow one's taste. This is the insight of the bhakti philosophy. This is why in Bhakti-sandarbha 202, Sri Jiva Goswami makes a clear distinction between those who have a proclivity for yukti or vicāra and those who are primarily motivated by ruci, and concludes that once the work of logical reasoning is done, the devotee has to return to the basics of attraction or taste and leave intellectualization aside. Devotion is beyond the intellect. If one does not understand this, it is impossible to understand the rāga-mārga that predominates in Vrindavan. This is why the eligibility for rāgānugā is given as lobha or laulyam (as we saw in the verse from Smaraṇa-maṅgala in VMA 1.4).

The residents of Vraja have unflinching commitment to spontaneous loving devotion (rāgātmikā). One who becomes anxious to have that same mood is eligible to perform rāgānugā-bhakti-sādhanā. (BRS 1.2.291)

Upon hearing about the sweet moods and activities of Kṛṣṇa and his devotees in Vraja, one whose mind becomes attracted in such a way that he no longer depends on the instruction of revealed scripture, logic or argument, then that is the symptom indicating the outbreak of greed. (BRS 1.2.292, CC 2.22.155)

One who has come to the point of greed for the mood of the Braja-vasis no longer worries that Radha's name is not in the Vedas or Upanishads, or even in the Bhāgavatam. He knows through hearing from premika, bhāvuka, rasika devotees that Radha's existence is a divine necessity. She knows by taste and proclivity that service to Radha is the ultimate goal. She knows that Vrindavan is the world as seen in its purest state of reality. No logical arguments or scriptural citations will disturb this faith, and so it is called niṣṭhā, because it is free from anarthas such as dependence on such things. Even the great exemplary saints from the past like Shukadeva are not the last word.

Enough of all worldly topics of conversation! I find them more horrific than a million hells. Making such great efforts to understand the Vedas and Upanishads is a waste of time. Moreover, I fear the liberation of "isolation" (kaivalya), If Shukadeva and other great devotees are intoxicated with the worship of the Supreme Lord, what is that to me? For my part, I only pray that my mind be absorbed in the nectar of Radha's lotus feet.

With such niṣṭhā we can proceed on our sādhanā of Braja-vāsa.