Globalization and the Dham (Part II) 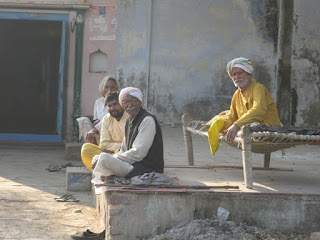 How a Gaudiya Vaishnava performs pilgrimage to the Dham

As a consequence of this designating of numerous sites as related to famous or obscure events in the life of Krishna, the most important pilgrimage activity for visitors to Vrindavan is the parikrama around Braj, called Chaurasi Kos Braj Parikrama. Rupa Goswami and other Vaishnava saints like Narayan Bhatta established hundreds of such places in the Braj area as reminders of Krishna’s activities. During the parikrama, devotees visit these places and perform various rituals there, principally hearing the stories related to that place.

The parikrama is usually done as a group; the biggest parikrama having as many as 25,000 devotees moving together through the Dham for 40 days, and there are several others with five thousand or more. Nowadays, of course, many do this in an abbreviated fashion by bus, but for those who are more serious about bhakti, the Dham parikrama is a way that they can easily practice all the five most powerful acts of devotional service listed above. The other four practices are thought to become even more powerful and effective in the Dham because of the inherent spiritual power (vastu-śakti) present there.

But much more important for the continued sanctity of the Dham is its role as the center for religious professionals – speakers of the Bhāgavatam, performers of Rāsa Līlā musical dramas depicting Krishna’s life, other musical performers of bhajan and kirtan, temple priests and guides to the holy places, what to speak of the most important category, the renounced monks who dedicate their lives to meditation on Krishna (bhajanānandī).

In the current situation, more and more housing developments are being built to cater to Hindu or Vaishnava retirees from around the world who wish to spend the last part of their lives in a sacred environment. This is true not only of Braj, but of other holy places like Rishikesh and Hardwar.

The eternal glory of residence in the Dham

Residing in the Holy Dham is part of the fundamental process of devotional service – taking shelter of the Lord or śaraṇāgati.

One who has taken shelter makes use of his body to reside in a holy place connected to the Lord. With his words, he says, “O Lord, I am Yours.” And he uses mind to think of himself as belonging to the Lord. In this way, he enjoys spiritual bliss. (Hari-bhakti-vilāsa 11.677)

On the one hand, the sādhanā of Braja-vāsa is the easiest of sādhanās, because all it requires is one’s physical presence in the Dham, allowing its inherent potency (vastu-śakti) to work its magic. In other words, you don't really need to do anything else but be there. On the other hand, it is the hardest of all because it truly penetrates to the very core of what all bhakti-sādhanās are about. It is about cracking the hardest nut of all -- the ego, the knot that binds one to material existence. This can be called the sādhanā of identity. Therefore, the true results of living in Braj is that one will take delight in devotional practices precisely because that is what one has become, that is what it means to be a Brijbasi.

This is why Rupa Goswami calls the instruction to reside in the Dham along with executing the other practices, "the essence of instruction."

Gradually engaging the tongue in sweetly chanting and the mind in constantly remembering Krishna’s name, form, pastimes and so on, one should remain in Braj and pass the remainder of one's days under the guidance of a passionate lover of the Lord. This is the essence of all instruction. (Upadeśāmṛta 8)  See also VMA 1.30.

So what is the nature and meaning of Braja-vāsa sādhanā? In essence, it is integral to the culture of rāgānugā bhakti itself, since rāgānugā bhakti truly does focus on the transformation of one's identity. Therefore it is no surprise that Rupa Goswami includes residence in Braj as one of the essential elements of rāgānugā practice:

One should live forever in Braj, remembering Krishna and the most beloved associates who surround him and remaining absorbed in hearing and chanting about them. Here in this very place, Braj, one should serve the Lord [and the Dham, which is not different from him] following the residents of Braj in both the external sādhaka-deha and well as internally in the siddha-deha, out of the desire to attain their loving mood. (BRS 1.2.295-296)

One has to follow both internal and external exemplars. That is why we often hear the words ānugatya-maya, it is based in obedience and conscious adherence. There is a very significant psychological truth involved here, because this dual (in the two bodies) culture of identity is one that is designed to converge, that is, one attains psychological harmony of the internal and external selves.

Rāgānugā bhakti sādhanā is about identity above all. It is about becoming something which at present one is not. It is about replacing our material identities, our upādhis, with a new identity, namely that of a resident of the Supreme Lord's own abode, with a specific relation to him.

Jiva Goswami states here, "If one cannot live in Vrindavan physically, he or she should do so mentally." This does not really mean that living physically in Braj is optional, but that one should not depend on physically living in Braj before beginning one's rāgānugā sādhanā. But if one is given the grace to come physically to Braj, then this is the best way to perfect his or her transformation of identity into a Brijbasi. This is because that sādhanā takes place on an external as well as an internal level, and direct service to the Brijbasi who is a rāgātmika bhakta in the worldly Vrindavan is an indispensable element.

The importance of residence in the Dham in terms of its goals in rāgānugā sādhanā is further described by Raghunath Das Goswami:

Not having worshipped the holy dust that sprinkles from Śrīmatī’s lotus feet;
not having taken shelter of Braja Dham, marked with her dainty tread;
not ever having spoken with the souls so laden with a weighty love for her,
how foolish those who think that they can plunge into the secret sea of nectar that is Śyāma! (Sva-saṁkalpa-prakāśa-stotra, 1 )

Braja-vāsa is thus really for the uttama-adhikārī because it is meant for one who has come to the conclusion of all the scriptures and has no longer any use for any other spiritual instruction than service to Radha and Krishna.

One who is expert in scripture and logical argument and is firmly convinced of his goal in bhakti, whose faith is fully mature, is called the most qualified for bhakti. (BRS 1.2.17)

Kālaṁ nayed akhilam, "to pass the remainder of one's days", i.e. to stay there forever, indicates that this is expected to be something that happens at the end of one's life, as an attempt to finalize the business of bhakti-sādhanā before it is too late.

Thus, according to Prabodhananda -- whom we can call the acharya of Braja-sādhanā as exemplified in Vṛndāvana-mahimāmṛta -- the principal qualification for residence is renunciation.

You fool, get moving today, on this very day!
Give all of this up for Vrindavan,
the desire tree that can grant all your wishes,
this Vrindavan that is the sacrificial altar
for the pure love of Radha’s lord of love.
Go, without thinking that any of your other duties
need to be completed. (VMA 1.71)

Even though the physical difficulties may have been attenuated for residents of Braj, the renunciation of the ego is just as hard or even harder than it ever was. The further the distance one has to travel physically is not as much a problem as the cultural distance. For those coming from different cultures and countries, it is a case where East is East and West is West and ne’er the twain shall meet.

The idea is that to reside in the Dham one has to cultivate the sense of belonging to it, even in the real-world situation. From the point of view of religious psychology, it is a kind of absolute conversion. Rather than the superficial transformation that comes in the tīrtha-yātrā, it is more like a complete rejection of the phenomenal self.

This then is the essence of the Dham. Since the Dham serves its spiritual purpose by having committed practitioners of Braja-vāsa sādhanā, which cannot be seen as separate from the other four principal aṅgas of bhakti, i.e., bhajanānandī Vaishnavas, it must be made suitable for them. Suitability for the bhajanānandī Vaishnava means a sāttvika environment, that which can be called “a human sanctuary” to use the term that was coined by the Vrindavan spiritual environmentalist Hit Kinkar Sewak Sharan.