Vrindavan is for the Bhajananandi Vaishnavas 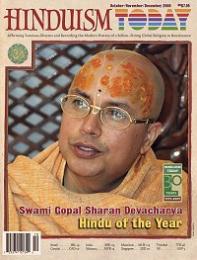 This was originally posted on Vrindavan Today Over the past nine days, I had the opportunity to stay at Golok Dham ashram in Bijwasan, South Delhi, where the appearance day of Nimbarkacharya was being celebrated. During this time, I was lucky to meet a number of spiritual leaders from around India and talk to them about Vrindavan.

The acharya at Golok Dham is Gopal Sharan Devacharya Maharaj, who was named "Hindu of the Year" by Hinduism Today magazine. The editor and publisher of Hinduism Today both came from Hawaii to present Maharaj with the award. The acharya of the Kaua'i ashram, Bodhinath Swami, has given his account of the event on his blog.

Other important guests over the five days included the Peethadhishwar of the Salemabad seat of the Nimbarka sampradaya, Radhe Sarveshwar Sharan Shriji Baba, who is universally accepted as its spiritual head, Karshni Gurusharanananda Swami, Svarupananda Saraswati of the Gautameshwar Peeth in Gujarat, Acharya Balkrishna from the Patanjali Yogpeeth, Govindadev Giri Maharaj, Shrinath Shastri from Vrindavan and several others.

All were wonderful, devotional speakers and it was a delight to hear so much high quality Hari katha. I should repeat what they said, but that will await another day.

I have been given five minutes to speak and it is not much time. I must begin by thanking Shri Gopal Sharan Devacharya Maharaj for his kind hospitality and by speaking of the glories of this ashram, its acharya and devotees, this program and the guest speakers. But even if I had five hours and five mouths, or a thousand mouths like Shesha, it would still be insufficient to do them all justice.

I will simply quote a description of Goloka found in the Brahma-saṁhitā and you will all see how appropriate it is to the ashram here.

In Goloka, the wives are goddesses of fortune, the husband is the Supreme Person. The flora consists of desire trees, the land is made out of divine touchstone, and the water is the nectar of the gods. Every word is a song and every step a dance. There the flute is everyone’s dear friend. Goloka is the supreme light of spiritual joy, and most relishable. (Brahma-saṁhitā 5.56)


Shriji along with her ashta sakhis and Sarveshwar Golok Bihari reign over this dham from their temple. The buildings and landscaping create a mood of chintamani and kalpa-vrikshas. Certainly all the devotees here are very attached to kirtan, though maybe they could dance a little more. And of course we have been delighted by the sound of Basant Guptaji’s enchanting flute permeating everywhere throughout the ashram at least twice a day.

Swamiji and his disciples deserve a lot of credit. They have put on a big program like this, where so many things can and do go wrong, and yet there was never any tension. The sense was that they were all taking everything in their stride, just like a normal, everyday event.

Even if this ashram did not have the quality of Golok by virtue of Gopal Sharan Devacharya’s vision and presence, the arrival of so many eloquent sants and sadhus would have transformed it. For as Yudhisthir said to Vidura,


And this brings me to what I wanted to say here today. While planning my discourse, I was reading Gopal Sharan Maharaj’s introduction to the Mahāvāṇi of Hari Vyas Dev, and was pleased to see him quote the following verse from Raghunath Das Goswami’s Stavāvali:

Not ever having worshipped once the dust
that sprinkles from Śrīmatī’s lotus feet;
not having taken shelter even once
of Braja Dhām, marked with her dainty tread;
not ever having spoken with the souls
so laden with the weighty love for her,
how foolish they who think that they can plunge
into the secret sea of nectar that is Śyāma!
(Sva-saṁkalpa-prakāśa-stotra, 1)


The story goes that Gadadhar Bhatta Goswami lived outside of Braj, but was writing beautiful poetry about Krishna. One day, he decided to send one of his songs about Krishna to Srila Jiva Goswami in Vrindavan. When Jiva Goswami heard the song he was simultaneously delighted and disappointed, for though the author had obvious devotion and talent, there was no mention of Srimati Radharani.

So he answered by sending this verse, telling Gadadhar Bhatta that in order to truly understand Krishna, one must worship Radha, one must take shelter of Vrindavan, and one must live in the company of those who have become aligned with her mood.

Rupa Goswami’s “essence of all instruction” is also like that:

Gradually engaging the tongue in sweetly chanting and the mind in constantly remembering Krishna’s name, form, pastimes and so on, one should remain in Braj under the guidance of a passionate lover of the Lord. This is the essence of all instruction. (Upadeśāmṛta 8)

In other words, the main purpose of a place like Vrindavan is, to put it in the words of Hitkinkar Sewak Sharanji, to be a “human sanctuary,” where those with the most elevated aspirations for spiritual life can fully dedicate themselves to it, and where those who seek inspiration and guidance can come to be benefited and blessed by them.

Preachers are now going around the world, telling people of Radha, Krishna, Vrindavan and the Yamuna, and those who hear are responding, enchanted. They want to come and see what is there… and what is it that they see?

Today, Vrindavan is being turned into a tourist town without any real understanding of its sacred character or its vocation as a place for bhajananandi Vaishnavas. We must be careful that in the name of development (vikāsa), we don’t bring about the ruination (vināsa) of Vrindavan and Braj.

By opening the town to automobiles, but turning the Parikrama Marg into a ring road, by tearing down trees to build more and more high rise housing projects, by filling the town with the competing blare of loudspeakers in every direction and the honking of cars, we are making Vrindavan unsuitable for the bhajananandi Vaishnavas. If that happens, it will be like killing the Dham.

Sri Krishna says in the Bhagavatam,

One who thinks that the self is this body made of mucus, wind and bile, who thinks his wife and relations are his, and the land of his birth to be worshipable, and moreover thinks that the holy places are meant for bathing and not for associating with those who have experience of spiritual matters, is nothing better than a cow or mule. (Bhāg. 10.84.13)


The holy places take their life from the presence of the bhajananandis, the holy men and women who reside there. We should not be eager to attract those who come to the holy city merely as curiosity seekers or tourists in the hope of making a quick rupee.

In Haridwar I saw a slogan painted on a wall: “India’s life is its holy places. The development of India means the development of its holy places.” This does not mean turning them into extensions of Delhi or New York; it means developing their true vocation as places where the saintly may reside and others can come and take benefit of their association.

So I ask everyone to please try to understand the nature of the Dham and what must be done to preserve its integrity and true nature. The protection of the Dham will only be possible when those of spiritual insight band together to stop the forces of materialism from damaging it.
bhajananandi Golok Dham Ashram (Delhi) Gopal Sharan Devacharya Hinduism Today