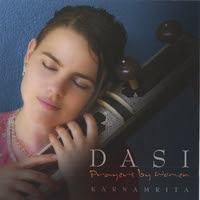 Radhe! Radhe! I mentioned in my last email how much I was appreciating Karnamrita's CD, but I don't think I was sufficiently effusive in my praise. Please allow me to be so now.

I have been listening to Dasi in the car for a couple of hours every morning without any desire to listen to anything else. You have to understand that I not easy to please: they have a reserved vyasasan for me down at Faultfinders Anonymous. I can barely listen to any kirtan produced by Iskcon except for perhaps Vaiyasaki. Most modern Hindustani or Bengali kirtan is syrupy and commercial. I like some classical Hindi singers like Bhimsen Joshi, but even there, as with opera singers, I find that technique has often triumphed over content and something important been lost.

Perhaps the clue is that Karnamrita has had enough training in Indian classical music and bhajan to be able to enter into the spirit of the music without losing her way. Your arrangements and production skills have only added to that. There is a Western popular music sensibility to the entire record that serves to highlight the mood of the original texts. In this, Karnamrita has been more successful than any Western devotee I have yet heard.

Perhaps it is the words. Of course, I am absolutely delighted with Karnamrita that she has made the somewhat daring choice of singing mostly Sanskrit texts from the Bhagavatam. But even more that she seems to have engaged with the words themselves. Though here and there, there are mispronunciations, the meaning always shines through. The musical ornaments invariably serve to bring out the rasa in the words. I am thinking in particular of the repetitions of Giridhari in the Meera Bai song, or that lovely riff in the Gopi Gita just before kitava yoshitam.

First of all, the selection of material was delightful in itself. I have already mentioned that the selection of Sanskrit was a bold and daring move. But the particular sections chosen were also original. After hearing the Gurvashtakam sung in 100 different ways, from jazz to new age, it is such a delight to hear someone who is actually engaged with the culture and language. This is bhakti. I suppose I may be biased, as I am likely only one of a handful of people who can hear the accent given to a particular word and feel its weight in the context of a verse or entire song, and obviously her charm and talent touch a far wider audience than tired old Sanskrit professors, but hearing her has given me hope in the future of Krishna consciousness and has revived my feeling for the power of kirtan.

The first song was a great surprise--it shows great imagination of choice, in my opinion. But it also a poster child for the Sanskrit language itself. The sweetness of the alliteration in mumucur munayo devA sumanAMsi mudAnvitAH is sheer joy. The production qualities are excellent, from the male voice accompaniment to the multiple tracking of Karnamrita's own voice harmonizing.

The next number, the Meera Bai song, is without doubt my favorite on the album. The picture it creates in my mind of Krishna walking through the dusty cowherd village alleyway is heart-stopping. I am already having trouble with seeing flashes of Vrindavan in my daily life; this song increases this delectable problem. The shy girl hiding from his sight and filling her eyes with his darshan is a brilliant line. Joyful and yet nostalgic of a lost opportunity. From there, through to meera dasi darashan pyasi, carana kamala bolihari, it is all extremely evocative.

The Yamunashtakam took a little longer to appreciate. I think I have a little prejudice against Hit Harivams. After all, we Gaudiyas have plenty of Yamunashtakas of our own, I thought. But it has grown on me. First of all, I like the choice of piano and cello accompaniment. It is too bad, by the way, that you couldn't afford a full string section, the electronic strings are a little tinny, but that is barely noticeable. About the song itself, Karnamrita handles the totaka meter with great aplomb. It is easy to fall into the trap of making totaka sound like doggerel, duh-da, duh-da, duh-da, duh-da, but Karnamrita has brought great feeling into what is a pretty standard ashtaka. Of course, I say "standard" because there is always repetition in these things, but taken on its own, it has a sweet and powerful devotional message.

The next song, Jai Radhe Jai Krishna Jai Vrindavan is pure rapture. This is the most joyful song on the album and you get that from the chorus as well. I think I heard your voice shouting a Haribol in the background as well. There are very few recorded kirtans that I have heard that communicate such a sense of joy. I want to get up and dance, and I often do.

The Sri Krishna Govinda Hare Murare kirtan is nicely done. To be honest, it has never been a big favorite with me because I don't like mixing up Narayan and Vasudeva with Krishna and Govinda, And Lakshmi's name just breaks my mood. But I loved the liner notes for this song. It was touching for me to hear that story of Karnamrita singing with some women in the train across North India. It is precisely this kind of experience that adds depth to the entire album. It is not just going to a teacher and learning some songs and techniques. It is engaging with the people and the spirit of the land and culture. And not just the "higher culture" but that of the people you meet on the train and in the markets and villages. In that sense, this song fits the theme of the album more than almost any other, because it carries within it the age-old mood experienced by Indian women identifying with Draupadi's helplessness and recourse to full surrender.

The prayers of Kunti Devi were a nice surprise. These verses have a special meaning to me as they are the first Bhagavata verses that I ever learned by heart. We had moved into the Gerard Street temple, I think, and Prabhupada had just instituted the system of repeating the Sanskrit verses before Bhagavata class. I had decided that I would learn each day's verse by heart. We happened to be doing Kunti's prayers at the time. I think the first one was vipadaH santu tAH. I have to thank Karnamrita's teacher Kutila for making her learn these verses as well. They go well with Draupadi's prayer.

Next is the Gopi Gita. This is a wonderful, wonderful addition to the album. Like the Yamunashtakam, it would have been easy to butcher these verses by taking a too straightforward reading of the meter or singing it too fast. The choice of eight verses out of the nineteen may or may not have been difficult. You did right to choose the first two and the last one. But there are two highlights of the song for me--one is when Karnamrita sings the tava kathamritam verse. There is just the right change in timbre and intensity. It tugs on my heart and I can just see King Prataparudra massaging Mahaprabhu's feet and singing, Mahaprabhu jumping up and embracing him and repeating bhurida bhurida over and over. How magnanimous! how magnanimous! The other I already mentioned, the ohey before kitava yoshitam, which is just enough to highlight the rest of the verse: "You cheat! How can you leave us here alone in the middle of the night?"

The last song, Pingala, was a bit of a surprise and the style is quite different. I particularly like the adept way in which she handles the verse used as a refrain. Again, this is a choice that shows boldness and originality.

So, I want to repeat that I am tremendously encouraged by this effort. I am looking forward eagerly to her next recording. One last thing, my heart was warmed by the liner notes refering to her stay at your household and the loving atmosphere she experienced there. Bolihari jai. Radhe Radhe!!
Karnamrita

JEudes said…
lyrics of the songs, someone can send me, I need urgently sing along to enjoy the blessings theses beautiful bhajans.

JEudes said…
lyrics of the songs, someone can send me, I need urgently sing along to enjoy the blessings theses beautiful bhajans.