March 16, 2007
On the agenda today--I am taking my students to the Iskcon temple, where Bhaktimarga Maharaja will be present. I emailed the following to Maharaj the other day:

Dandavats Maharaj. Thank you for responding so promptly. And double thanks for showing such enthusiasm to help me out.

The students have been told to come to the temple at six o'clock. The plan was to hear, chant and take prasad. I don't think they have any specific questions, or at least none that I know of. What I really want is for them to have an experience of Gaudiya Vaishnavism as a living tradition. In other words, they have been reading texts about the life of Chaitanya and the developments in Gaudiya Vaishnava theology, etc. But they haven't experienced it as a living thing, powered by faith and practice. I'd like to be able to get them to chant, to hear a basic lecture on the elements that really are at the center of Iskcon devotees' faith. 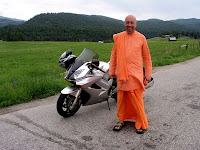 As I said in my previous letter also, I know that you intend to work with devotees in putting on a play. Perhaps after the students have taken prasad, they could be allowed to watch you direct for a while. I know that this is a central part of your preaching and a way of engaging and enlivening the devotees. The atmosphere was very good last time and I think that this too will be an opportunity to witness Krishna consciousness as something dynamic and evolving.

One other thing, which just came up in the last seminar, was something one student said about being fed up with Indian gurus because of a feeling that they were in it for the money. They nodded their heads when I quoted Abraham Lincoln, who said something like, "Adversity is not the real test of character; anyone can handle adversity. If you really want to see if someone has character, give him power." We could say "wealth, followers, or success of any kind" in the place of power. Bhagavan is full in six opulences. But when imitators start to accumulate opulences, they really do start to think they have become Bhagavan. And of course, this is the beginning of doom. Prabhupada said that purity was the force of Krishna consciousness, i.e. the ability to resist this Paundraka spirit is what makes Krishna consciousness really attractive. It is what lets Krishna's attractive flute sound through the complexities of the Chaitanya movement's worldly manifestation.

My original plan was to sit down and chant with them on the first day of my course. I chickened out. Next time I won't. Anyway, they are good people and, I think, deeply "innocent," in the Bhagavata sense. Just don't underestimate them.

I look forward to seeing you again, Jai Radhe,

Yesterday I got a phone call from Yogesvara Das, a Prabhupada disciple from New York who joined in London in 1969 during the heady days of George Harrison and the "Hare Krishna temple" recordings. He has written and published a number of books on various subjects, including children's books, and also done children's films and documentaries. (Google results: Joshua M. Greene, Yogesvara). He is now teaching at Hofstra University and writing an M.A. thesis, which is called "Engaged Vaishnavism: The Chaitanya School's Contribution to India's Religion of Love."

His premise is that bhakti has been unfolding throughout history and that Chaitanya set the stage for its emergence as a tool of global transformation. "From this perspective," he says, "seeing Krsna everywhere compels followers to social action within his creation." He thinks I might be able to help him in understanding historical developments.

Thinking that one interpretation is as good as another, I took the democratic academician's stance and told him that it was the responsibility of devotees to be true interpreters of the tradition, not just by repeating the words and ideas of the past acharyas, but by developing our own vision of the tradition, of trying to impose that vision and thus help direct its evolution.

The other thing that I said was that fundamentally we shared something important in that we both seem to want to see value in the theology of Krishna consciousness for THIS world. I thought he might like my article The Tao of Krishna Consciousness.

A bit of interesting news this week was the announcement that Canadian philosopher Charles Taylor had won the Templeton Prize, which is worth a cool $1.8 million. (For more information.)

Strangely enough, though Taylor is "world famous" and teaches at the same university that I am most closely associated with, McGill, I know little or nothing about him. In the newspaper article about this event, though, I found a few tidbits that fit into my Tao of KC thesis. His main subject seems to be the use of religious language and violence. I have been saying that there are two main rasas: vira and sringar. In Sanskrit poetics, most of the attention has gone to the latter. But I see them as the primary "masculine" and "feminine" experiences of rasa. The duality of religious narratives that Taylor talks about seem to be related. 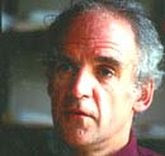 "...his fascination with how the spiritual narrative of purifying oneself by smashing and destroying one's enemy can so often trump the spiritual narrative to forgive and turn the other cheek... how Desmond Tutu and Nelson Mandela can avert a bloodbath in South Africa through forgiveness, but across the border in Zimbabwe, Robert Mugabe continues to hold power by preaching a mythology of needing to smash one's enemies... 'How do we get more Mandelas and fewer Mugabes?'" (Michael Valpy, Globe&Mail, March 15, 2007)

Obviously, this is only the smallest tip of the iceberg. Note to self: Get to know a bit more about Charles Taylor.

The annual McGill Sanskrit Sammelan is coming up on April 27. I have decided to cobble together my research on Ahangrahopasana, Aropa and Sadharanikaranam into a 15 minute presentation in Sanskrit.

Since I only go into the university one day a week, I have not crossed paths with Sanjay Shastri, the real driving force behind the Sammelan. He went through his entire education in Sanskrit, from primary to university, which means that he has a beautiful natural and flowing mastery of the language. I can write more or less, and read what I have written, but I don't have that fluidity. To give you an idea, here is a brief personal note that Sanjay wrote to me the other day: 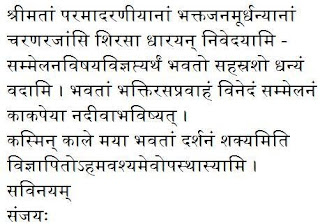 Anonymous said…
Nice post as usual Jagat and thanks again. It looks like Maharaja has a new bike! Cool!
Saturday, 17 March, 2007