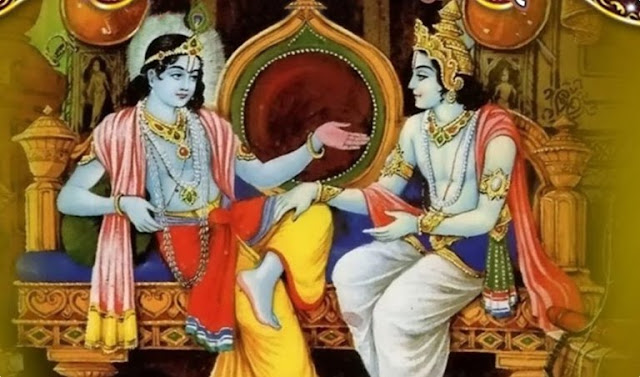 N.B. Many e-books are now available from jiva.org, as are the other first four Sandarbhas in hard copy.
Remember that the Jiva Tirtha courses with Satyanarayana Dasaji are ongoing. You can also take beginner or advanced Sanskrit with me. Registration is now open. Register here. The opportunity to study with an extraordinary Vaishnava scholar like Babaji in the holy dham of Vrindavan is unequaled anywhere in this world. Rare and most fortunate are the souls who can take advantage.

Similarly, at the end of Kṛṣṇa's dialogue with Uddhava [11.29], the same is intended. At the end of the previous chapter [11.28] Bhagavān Kṛṣṇa had told Śrī Uddhava that jñāna-yoga, which was described in that chapter, can bring forth its result only with the assistance of bhakti.


O infallible one, I consider this yogic discipline (jñāna-yoga) extremely hard to practice for one who has not controlled his mind. So kindly tell me in simple language the means by which a human being may easily attain perfection. O lotus-eyed Bhagavān, generally the yogīs, while striving to curb their minds, become exhausted in the very attempt, and are tormented by the inability to absorb their minds in meditation. (SB 11.29.1-2)
अत्र स्ववाक्ये तस्या दुष्करत्वेन प्रायः फलपर्यवसायित्वाभावेन चोक्तत्वात्। शुश्रूषमाणाया भक्तेस्तु सुकरत्वेनावश्यकफलपर्यवसायित्वेन चाभिप्रेतत्वात्। तद्भक्तिरेव कर्तव्येति स्वाभिप्रायो दर्शितः।

In this statement, Uddhava confirms that the practice of jñāna often fails to achieve success due to being exceedingly difficult. On the other hand, bhakti, which is what he desired to hear about, is the approved path because it is easy to perform and certainly leads to success. As such, it is bhakti alone that should be executed. Uddhava’s intention is thus revealed through his own words.

In this way, disregarding the practice of jñāna-yoga and accepting only bhakti, such devotees perform bhakti specifically to Kṛṣṇa with complete disdain for the results of jñāna-yoga. Uddhava elaborates further on this in the four verses that follow, beginning with:

Because Uddhava had stated in the previous verse (SB 11.29.2) that some yogīs are aggrieved by their inability to absorb their minds in meditation, he concludes in this verse that haṁsas, the swan-like persons who are expert in discriminating between the essential and the non-essential, definitely and easily take shelter of Kṛṣṇa’s lotus feet, which are full of complete bliss. Because Uddhava was directly seeing the lotus feet of Bhagavān, he did not use any word to indicate whose lotus feet he was referring to.

"Those persons" (amī ) refers to the pure devotees. “Are not hindered” (vihatāḥ) means that these devotees are not impeded in their practice of bhakti by yoga, karma or Bhagavān’s deluding potency. As such, they also do not become proud (māninaḥ). The reason for this is that they consider Bhagavān’s grace on gentle souls, who do not cling to any artificial designations, as the chief cause in the attainment of their goal, unlike yogīs and others, who consider it to be due to their own effort.

Uddhava was Kṛṣṇa's closest associate in Mathurā and Dvārakā. Before leaving the earth, Śrī Kṛṣṇa gave him the instructions that are found in the Eleventh Canto. Their dialogue is called Uddhava-gītā or Uddhava-saṁvāḍa. It is more detailed than the Bhagavad-gītā spoken to Arjuna, since Krṣṇa explains karma, jñāna and bhakti-yoga in a much more detailed and systematic manner than He does there. The ultimate conclusion of Kṛṣṇa’s instruction is in bhakti-yoga. This is understood from Uddhava’s statement quoted here, which come after He he has heard all of Kṛṣṇa’s instructions.

He says that wise people who have the sense of discrimination take to devotion to Kṛṣṇa. The reason for this is that bhakti is easy to execute, it never fails to give its result, it is not dependent upon anything else: a bhakta is not overpowered by Māyā, and does not become proud of his or her achievements. A bhakta considers his or her progress as the grace of Bhagavān or Śrī Guru and thus does not become proud. Generally, the practitioners on other paths consider their achievements to be the result of their own efforts and thus have a sense of egotism, which ultimately leads to their downfall. Such a peril should not exist on the path of bhakti.