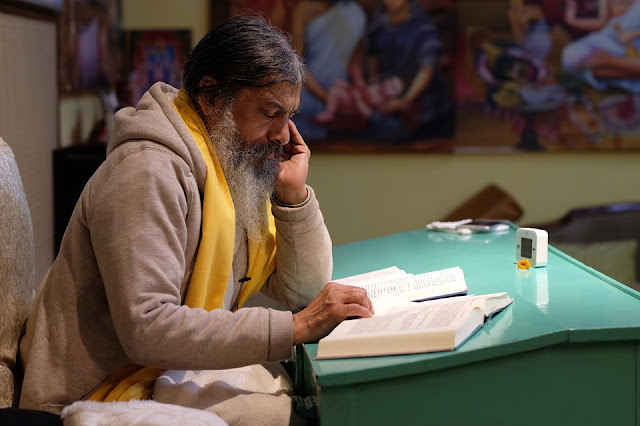 Today we had the closing ceremony for the fourth year of Srila Satyanarayana Dasaji's ambitious Jiva Tirtha program. Because of the Covid-19 lockdown, many of our students have already left, but about 20 persons were present for the session. Many of these have been coming for all the four years, which frankly is a great achievement, both for those individuals who have been able to commit to spending six months in Vrindavan to study with Babaji and for Babaji himself, who has inspired them.

Babaji's course is extremely far-reaching. This year the main course for study was Paramātma Sandarbha and Sāṅkhya Kārikā. His plan is to cover basic texts of the six philosophical schools -- Nyāya, Vaiśeśika, Sāṅkhya, Yoga, Pūrva and Uttara Mīmāmsā. So far fundamental texts of the Nyāya, Sāṅkhya and Yoga schools have been studied. Next year his plan is to cover Artha-saṅgraha, a basic manual for the Pūrva-mīmāṁsā school.

Babaji joked that some scriptures are go-mukha-vyāghra (“cow-faced tiger”) meaning that they look easy, but are in fact very difficult. Nyāya is vyāghra-mukha-gau, which means it looks difficult but is in fact not so hard. On the other hand, he promised that Pūrva-mīmaṁsā is vyāghra-mukha-vyāghra. Nevertheless, he stated that it is necessary to understand it in order to get an insight into the entire Indian culture.

He also lamented that in India, interest in and study of Mīmāṁsā has almost been completely lost despite its importance. Even in general, in Vrindavan, whereas there used to be a fine tradition of scholarship, for the most part most pandits nowadays, for better or worse, only train to give Bhāgavata-saptāha. He said very few have the ability to even read the commentaries and explain them.

This year, Babaji almost completed Paramātma Sandarbha. Next year he will finish it and then take up Śrī Krṣṇa Sandarbha. Although his original plan was to have the Jiva Tirtha course continue for five years, he has now made it open-ended, since it seems that five years is entirely insufficient for going through the entire corpus of the Gaudiya Vaishnava canon as well as the Ṣaḍ-darśana. So the challenge of the Jiva Tirtha training is very broad.

Students in their comments and assessments at the end of today’s session all glorified Babaji for his teaching style and his persistence. They rightly praised him for his unequalled erudition in today's Gaudiya Vaishnava world, who has dedicated himself to uplifting serious aspirants to become fully educated in this rich tradition of learning. Malati Devi, one of the outstanding and dedicated longtime students of Babaji, praised him for his consistency and reliability. It is true that throughout the six months that the course was conducted, Babaji did not miss a single class session, nor morning kirtan, even a single time.

Many devotees also expressed appreciation for the japa retreat that was held in January, as well as practical aspects of the Sāṅkhya Kārikā course, which deepened their practice and enhanced their bhajan and spiritual self-awareness.

It should also be noted that though the official course has ended, Babaji will continue lecturing from the Bhāgavatam, taking up where he left off previously in the Ninth Canto and also continuing his Sunday evening Rāsa Līlā lectures. These will all be live-streamed and also posted on Youtube.

There was much praise for many of the devotees who have taken up different kinds of service, Malati Devi, who manages the Jiva Institute website as well as publications, Jaya Devi, who manages most of the practical aspects of the ashram, Kamala Devi, who has been a stalwart "temple commander" enhancing the general appearance of the ashram as well as taking care of the cows, Vilasa Das, who has taken over the management of the Grantha Mandir, which I started many years ago and is now part of the Jiva group of projects.

Although only a few of the students attend my classes, some expressed appreciation for the Br̥had-bhāgavatāmrtam courses, which are intended as a practical Sanskrit reading course. I would also like to mention here that a deeper knowledge of Sanskrt is a desideratum for entering into all the shastras. The Jiva Tirtha one-year introductory course in Sanskrit has been in development since the beginning of this program and is getting fine tuned with every passing year. The goal is to familiarize students with the most important aspects of the Sanskrit language within a six month period (though some students keep coming back again and again!!!), after which one should be able to follow a reading course.

I am writing all this in the hopes that more and more people will take advantage of the facility that Babaji has provided for an in-depth and practical study of Vaishnava scripture and Indian culture in the holy city of Vrindavan. I can honestly say that this is an unequalled opportunity anywhere in the world. All the students who are here (not all of whom are Babaji’s disciples, that is not a requirement nor is there any pressure to become one) all without exception recognize the great fortune that they have to reside in Vrindavan and study our tradition's texts in this intense fashion.

One more thing. Babaji Maharaj continues to expand the Jiva Institute mission. He has purchased another adjoining property where he intends to start a virtual university, where more and more courses will be available for distance learning. Many of our students will become qualified before long to teach and to help with new service opportunities in this exciting new venture.

I applaud Babaji's efforts to share this fortune with as many people as possible. I also feel that it is Radharani’s grace that I fortune to participate in this project over the past four years, as well as to play a role in the editing and production of the Sandarbhas series. If all goes well, we will complete Babaji's epic translation of Srila Jiva Goswami’s magnum opus in a year or two and this masterful and authoritative translation will be available to Vaishnavas and scholars around the world. 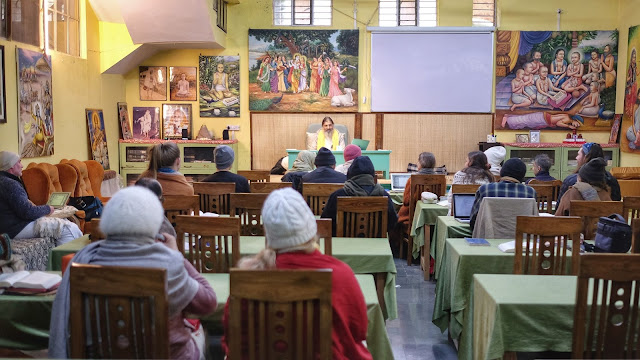 Prem Prakash said…
This may seem a silly question, but why the desks and chairs? Why not sit on the earth in an asana, as in all the paintings in the background?
Sunday, 29 March, 2020

Jagadananda said…
It was Babaji's idea to accommodate mostly Western students, especially a group that came annually from Rutgers University in the USA. The majority of the Western people are unable to sit on the ground for any great length of time, and many of them wish to take notes and so on, so the decision was made in this way. I think that there is an idea also that this is the environment for "serious" study.

There are other programs that are done in the traditional manner, but the main classes are done this way. I would also prefer the other way, and I find it rather disconcerting to have five or six students sitting spread out in a classroom type of setting rather than face to face on the ground, but I have also gotten used to it.

Nice to hear from you, Prem. Yes, I will be trying to get back in the saddle again where the blog is concerned. Just trying to do the service I have been given. Jai Radhe!
Monday, 30 March, 2020

I am thrilled you are back on this blog. It's my daily dose of braja dust, to borrow a phrase. I also think it's generous of you to donate the space to Gadadhar Pran das. Fascinating stuff.
Tuesday, 31 March, 2020