A word about Bengali transliteration and pronunciation 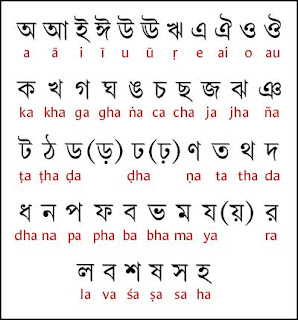 A feature of Gadadhar Pran Prabhu's writing is the heavy use of Bengali or Sanskrit words. This has led to conflicts between us when I worked on his books, like the Govinda-līlāmṛta. At any rate, even if I totally surrender to his will, there is still a need for consistency, etc.

Bengali pronunciation differs from standard Sanskrit pronunciation and this is indicated in the impromptu spellings that he uses. To italicize and use diacritic marks throughout his writing becomes overly heavy, so we have decided to change our styles policy and for the most part will treat Bengali words using a natural spelling as though they were adopted English words.

Although Bengali and Sanskrit have fundamentally the same alphabet, there are numerous differences in pronunciation. In Another Side of Thakur Bhaktivinoda, Sanskrit verses, though written in Bengali script and pronounced by Bengalis according to their regional variations, are transliterated according to the Sanskrit transliteration conventions.

Some Sanskrit/Bengali words have already been adopted by devotees -- karma, yoga, bhakti, seva, Nabadwip, Vrindavan, Krishna, Radha, swami, Bhagavan, etc. etc. These will not be changed when used in an English sentence.

However, in wholesale quotations of songs, we are using the standardized scholarly system which has the advantage of being convertible to the Bengali script. The standardized scholarly system (italicization and diacritics) will therefore be used in these cases. We use the utility DiCrunch for conversion (https://scriptoq.com/tools/diCrunch/index.php) so anyone wishing to convert to Bengali script can use this app to do so.

The main characteristics of these two systems are the following;

(1) Bengali a is pronounced like a short o sound like in "box." At the end of most words it is not pronounced, except after conjunct consonants. In standardized transliteration, we use the letter a in all cases.

In some cases, however, such as at the ends of verbs, the sound is longer (ō) In the impromptu spellings, we often use o instead of a. In the standardized spellings we simply use the a. Thus,


(2) The above can lead to another confusion in the case of long a (আ = ā), since in the impromptu system, the letter a is often used for both short and long a (অ আ).


Similarly, the impromptu forms of other short and long vowels are generally not distinguished, but they are in the standardized transliteration.

The problem here is that in conjunct consonants b is being used where w or v are more familiar, because standardization is for consistency, even though it might not be sounded out. So,

(5) Retroflex d, ড ঢ in Bengali, like ya, has a beginning and middle form, the latter having a dot underneath ড় ঢ়. For the former, we use ḍa, ḍha, for the latter, ḏa ḏha. The difference in pronunciation is that the latter sounds like a hard ra. In the natural system these can sometimes be written either as d or as r, more often the former. Example:

(6) The letters ca and cha (চ, ছ) are pronounced cha and chha, the latter looking strange to an English speaking person. In the standardized transliteration, we use the former, in the ad hoc version we generally use the latter, but Gadadhar Pran Prabhu's preference is to use the former system, especially for names like Caitanya (rather than Chaitanya). So we have acceded to his wishes in most cases.

(7) The letters শ and ষ are śa and ṣa in transliteration, and both are sha in the impromptu version.

(8) Final a is generally dropped in the impromptu version, but always kept in the standardized transliteration.

I realize that all this may look complicated and difficult in the beginning, but the difficulties presented by the task make it necessary. The advantages of the two systems is that the standardized form is convertible, while the impromptu form is more easily readable for the non Bengali speaker.

Have you seen this?
https://en.wikipedia.org/wiki/Romanisation_of_Bengali

Looking at the wikipedia entry, the word মন = mana, is pronounced IPA [mon], no ending a.

This was news to me.

Now consider the many different other languages readers come from, and there is just no way you can convey pronounciation in a simple way, except for through IPA. Better use a standard that can be converted one to one to bengal script, and then the reader can learn the pecularities of bengal pronounciation if s/he want to. Using impromptu characters appears like it will give wrong pronounciation to most readers, and no simple way to figure out what word it actually is. Gadadhar prans printed books occasionally have that problem.

Jagadananda said…
Normal a sound in Sanskrit is the vowel sound linguists call schwa. They use the symbol "ǝ" like an upside down e. Personally I would prefer to adopt this as a letter. In English it would save a lot of confusion, but English spelling reform may never ever come. It is the basic vowel sound.

You are right that o is not much help, but I did say it is like the o in box. The actual letter o in Bengali is like the other Indic languages, like in bone.

I wrote the above quickly and it is in need of improvement. I was specifically trying to deal with the situation in editing Gadadhar Pran's writings in a way that would work for him as well as for those who are looking for more accurate convertible text. So far, it is still a work in progress.