May 01, 2012
Bharata Muni names eight rasas, coupling them in four complementary pairs. Thus he associates hāsya with śṛṅgāra (laughter and romantic love), vīra with bhayānaka (fear and heroism), adbhuta and bībhatsa (wonder or astonishment with disgust or horror), and karuṇa with raudra (grief, empathy or pity with anger).

Bharata did not accept śānta as a rasa, and there is a debate going on pretty much through the tradition about whether it should be considered one. Abhinava Gupta was the great defender of śānta-rasa and since his time there have been nine rasas rather than eight. Abhinava Gupta also denied bhakti as a rasa and subsumed it to śānta-rasa, which is probably a reflection of his religious philosophy.

Amongst the various poeticians there was always an attempt to find the one rasa that incorporated all the others, with some like Abhinava Gupta saying it was śānta, others claiming wonder (adbhuta), and Bhojadeva naming śṛṅgāra as the one rasa that included all the others. Nevertheless, as the following sampling shows, none of the principal poeticians other than Bharata seems to have put much thought into the order in which the rasas are given.

Rupa Goswami's approach was somewhat revolutionary and brought about a whole new kind of thinking into the discussion of rasa. Abhinava Gupta had already raised the possibilities of a spiritual dimension to rasa, but Rupa Goswami was the first to really revise the scheme of rasas radically. For Rupa Goswami, bhakti-rasa is the only rasa, even though bhakti had not even been accepted by any other acharya, all of whom, for good reasons, kept bhakti in the category of a bhāva. This is because either they believed that rasa cannot exist in an unequal love, or that bhakti only arose temporarily in the context of another rasa.

Rupa Goswami's position is that since Krishna is the source of all rasa, raso vai saḥ, any relationship with him is rasa, albeit not exactly of the same kind as that described by the poeticians. This is the basic devotional position as stated by Narada in the first chapter of the Seventh Canto. There it is said that Kamsa and Shishupala, what to speak of Putana, etc., all attained the highest benefit despite relating to Krishna in an inimical spirit. The passage concludes, tasmāt kenāpy upāyena manaḥ kṛṣṇe niveśayet, "Therefore fix your mind on Krishna in whatever way you can [and you will attain the greatest good]."

Rupa Goswami, simply stated, is approaching rasa from the point of view of prema or love. Whereas the other poeticians or dramatic theorists are approaching the subject in the context of drama or other kinds of literary products, Rupa Goswami is making a statement about human psychology and its spiritual implications. Thus for him, the only rasa is love of God, the reality of which is reflected in this world. He ultimately reduces the seven secondary rasas to the category of vyabhicārīs (BRS 4.7.14) in that context.

Rupa Goswami divides love or the mukhya-rasas according to degrees of intensity and intimacy, accepting śānta and śṛṅgāra as having this relational quality of love and ranking three other kinds of love between these two poles. 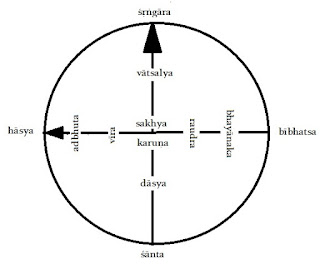 Similarly, Rupa Goswami's ordering of the seven gauṇa-rasas seems also to have a logic to it, though it is different from that of Bharata. We could think of it as a kind of personality scale (see the table). So the x-axis consists of the five primary rasas with śānta below and śṛṅgāra at the top in the familiar order; the horizontal y-axis consists of the secondary rasas in the following order: bībhatsa, bhayānaka, raudra, karuṇa, vīra, adbhuta and hāsya. Looked at independently, these five rasas could be seen as relations to the world or dominant personality types, sthāyi-bhāvas in the original sense of the term. [I should probably have put them from left to right instead of right to left. For the time being it will have to stand.]

At the top is śṛṅgāra, without competition the king of rasas but also best friends with hāsya, agreeing with Bharata. So Krishna, the expert joker (parihāsa-viśārada) and dhīra-lalita-nāyaka is evidently at the high end of the scale. At the other end we have bībhatsa and śānta, both of which are barely rasas at all in Rupa Goswami's calculation. But they both indicate a level of disgust with the world and a fundamental base position towards God.

The x-axis shows a growth or evolution in love, while the other indicates evolution in attitudes to the world, from disgust to the carefree. Hāsya, "It's absurd, God’s lila, what else can you do but laugh? God is in his heaven and all's right with the world!"; adbhuta, "Ain't it amazing? What a wonderful world!"; vīra, "We need to do something about that, change the world!"; karuṇa, "Look how much suffering there is in the world!"; krodha, "I am mad as hell and I am not going to take it any more!"; bhayānaka, "The world is a very scary place"; bībhatsa, "I hate the world, especially these disgusting physical bodies!" These are seven very distinct attitudes in a very clear sequence, and can be seen as attitudes to sexuality also.

On the other axis, Śānta comes first (in steps, see BRS 2.5), then dāsya, then sakhya: that is fairly clear and familiar. But how is it that śṛṅgāra comes after vātsalya? We all have to have sex before we can become parents! But maybe śṛṅgāra can really only be appreciated after we have become parents, at least in terms of consciousness in this world, and of course not in Radha Krishna where the mood is nitya-siddha.

This is an interesting line of thought that I hadn't considered before. Since the mood of vātsalya is an integral part of madhura-rasa, there is some logic to it. At any rate, the possibility is well worth considering in the context of the human experience that even though sex desire and the desire for romantic/erotic relationships is subdued somewhat or undergoes transformation in couples with children, even to the point that sexuality sometimes becomes a non-factor and they think that sex desire has been "conquered," there is often a new manifestation of desire for sexual intimacy that rears its head after this phase of life is completed. The experience of parenthood can then enrich the romantic relationships by adding an element of previously lacking maturity. The point is that the desire for sexual intimacy does not really go away and that for a sadhaka couple, it can go to deeper and deeper levels as one grows in awareness and assimilates life's experiences.

This also can be used to enrich the understanding of the four stages of life and the puruṣārthas: Brahmacharya = dharma, grihastha = artha, vānaprastha = kāma, sannyāsa = mokṣa. The idea here is that the fulfilment of sexual desire only comes after one has dealt with the necessities of householder life, where the raising of children would be assimilated to artha. Prema is, of course, only at issue here in relation to spiritual practice and should not be confused with kāma.