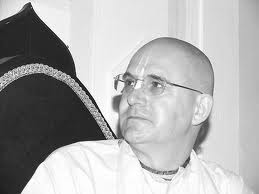 Prabhavishnu Swami, a leading ISKCON sannyasi and guru, 60 years old, was recently caught in flagrante delicto with a woman, apparently a non-devotee, in Bangkok. Another tiresome episode that has ISKCON's critics jumping up and down with indignation, and many disciples crying in pain and disbelief.

Where are the pure devotees? They cry. All the gurus are false, they scream. ISKCON is full of fakers and misleaders, they say. Prabhavishnu himself has given a litany of excuses -- overwork, too much travel, etc. But they refuse to put their finger on the obvious.

Neither the ISKCON leadership nor their critics in the Prabhupadanuga camp have identified the real flaw, which is the sannyasa institution itself.

Sannyasa, like brahmacharya, is something of a cult trick. It is a leftover from the Mayavada influence on India that rejects the world, and therefore sees woman and sexuality as false. An organization like ISKCON demands uncompromising and absolute fidelity to the cause, and that absolute commitment is expressed in celibacy.

When a sannyasi "falls down," the institution's principal objective is to get the experienced, committed and selfless servant back into the groove -- making money and money-makers for the cause. This, it is argued, is correct because the good they do outweighs the bad.

Those in opposition to the current institution want to hold the so-called gurus and sannyasis to their standard of absolute celibacy because that is their only sure-fire externally verifiable measuring stick for determining who is a "pure devotee."

Sannyasa serves an institutional purpose in the name of a transcendent ideal, but it is artificial. It therefore has only three possible outcomes -- falldown, isolation or hypocrisy, which is really a combination of the other two. As an institution deterioriates, hypocrisy becomes the norm and it is aided and abetted by other privileged leaders who are profiting personally from the status quo, and in all likelihood are counting the days until their own hypocrisy is exposed. One should not underestimate  a large, wealthy spiritual institution's capacity for hypocrisy.

And therefore, the verse Prabhupada loved to quote to show that the achievements of Mayavada are only temporary applies here too:

O Lotus-eyed One! Those others who falsely think themselves are liberated, who have no love for you, and whose intelligence is [thus] impure, may rise to the highest realms
through intense austerities, but [eventually, inevitably] they fall down again due to ignoring your feet. [10.2.32]

This verse means that even those who are engaged in spiritual practices and tapasya, whether they claim to worship a personal God or an impersonal God, if they have not attained prema, who do not attain rasa, find that all their relationships eventually deteriorate into impersonal I-It relations. Even the much touted personal relation with God turns into an I-It relationship. Because the God that exists in the temple or even in the mind is just a mental construct. Their sannyasa is simply a show for prolonging the self-deception of spiritual advancement.

Only in madhura-rasa sādhana can one truly come to a cultivation of I-Thou, which produces love that is then expanded outwards into the rest of one's life.

Prabhavishnu couldn't bear life without prema and so he sought solace in female companionship, which of course he mistook for sex desire. Unfortunately, it does not seem that the woman has a background in devotion, which means that this too is most likely to be short lived. I assume that he and his companion will tire of each other soon, he will come crawling back to ISKCON, receive his forgiveness and, once again, before long, be sitting on the vyasasana, glorifying pure devotional service. But he will not be any closer to prema, I fear, and the root causes of the problem -- in him and in ISKCON -- will remain.

Jagadananda Das said…
Interestingly enough, this post had only been saved as a draft. I published it on May 8, 2012. But my prediction has apparently already come to pass: See Prabhavisnu’s Entrée into ISKCON Society after his recent disgrace. Even sooner than I expected!
Tuesday, 08 May, 2012

Suren said…
You've certainly made a good point. Its interesting to note that this fall down is not confined to Sanatana Dharma. It seems Sanyasa like systems in other traditions seem to suffer similar consequences. All that controversy in the Catholic Church that had been going on; essentially those priests seem to fallen similarly. Ive also read somewhere that such things seem to happen even amongst Jain Sadhus and Sadhvis in their system of celibacy. I would be interested to know what takes place amongst Buddhist Monks and Nuns.
Wednesday, 09 May, 2012

Where is it stated that Sannyasa is forbidden in Kali Age ?

Hare Krsna. I have one question and I request you to answer. We see from the life of Sri Yamunacharya who said that "Since my mind has been engaged in the service of the lotus feet of Lord Kṛṣṇa, and I have been enjoying an ever new transcendental humor, whenever I think of sex life with a woman, my face at once turns from it, and I spit at the thought." I think whether you are a sanyasi or grhasta or anything, the real interest of substance is what kind of interest do we have towards Krsna. If that substance is lacking and if we go after external dress, all kinds of anomalies can occur. It could be as simple an explanation as this. Whether a person is living in a institute or in a cave, if his interest is varied because of some reason, these things can happen. Nevertehless, I appreciate all persons participating in the glorious world of Krsna consciousness whichever be the place they might belong. Can we not see with this kind of attitude rather than fitting into the scheme of your explanation such as journey towards Prema is disrupted etc.

Jagadananda Das said…
I don't see a question here, or at least nothing clear.
Monday, 10 March, 2014

Anonymous said…
Though you may not notice it, like a fish that does not see the water within which it swims, respectfully, I suggest that it seems that you, Jagananda, are also 'institutionalized'.
Why do I say that?

Well because in your rather cynical analysis you also blame the 'institution' of ISKCON. Thus you are also institutionalized.

The fact is the 'institution' does not make anyone 'falldown' or even 'advance'. Sadhakas advance or falldown because of their own desire and actions. Blaming an 'institution' is a very superficial analysis. It shifts the blame from the individual soul to some other entity, in your analysis the 'institution'.

BG 4.11: All of them as they surrender I reciprocate accordingly.

That is the ultimate and only principle involved. If we are sincere, nothing, even the demon 'institution' or 'sannyasa' can stop us making advancement. But if we are not determined, then just like Lord Caitanya, Krsna dasa and the Bhattaharis, even if we are in the personal association of the Supreme Lord, then we can falldown.

The fact that you default to the well-trodden path of cynically blaming ISKCON and sannyasa shows a lack of insight and indicates your own attempt to blame 'other entities' instead of your own self for your previous misdemeanors.

Blame yourself, and then maybe you will then see the problem and, most importantly, the solution is within your very own self.