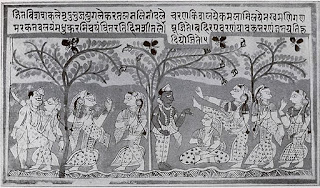 One year is over, another begins. Happy New Year to all.

For me, it is again a time for some reflection. It has been an eventful year for me, but still not entirely satisfying, mainly because of my own limitations. What have I done this year? What have I accomplished? And where am I going and what do I hope to yet achieve? I am going to make a couple of blog posts musing on these matters, which will no doubt look like navel-gazing, but then what are blogs for?

Of course, the main, basic, fundamental point is prema. This is such a grand and cosmic goal that it sometimes gets lost in the day-to-day functioning of life, the immediate goals, but one should never forget it. And in fact, everything that I do, in one way or another, is connected to that overarching principle, prema is the prayojana. Even when it appears otherwise, that is the principle that I live by to the best of my understanding. And if one ever feels satisfied, then that merely means his hunger was not great enough.

And I am certainly not satisfied, on practically any level. And yet, being satisfied while increasingly suffering an unsatisfiable hunger and unquenchable thirst is perhaps the great paradox of bhakti. I just opened a book that quoted the Gita:

One who is not attached to the contact of the external sense objects but finds pleasure within is one who has been linked in yoga to Brahman; he experiences imperishable joy. (5.21)

That is Brahman; Krishna is a different matter.

I have passed into my 61st year and still I feel as though I have no legacy, that there are too many things left undone. Some may call this a kind of illusion, the exigencies of an overpowering superego or whatever. I am not going to argue all that. Dharma is dharma. You gotta do what you are impelled to do. What will repression accomplish?

So though what I am going to say in these posts is going to sound a lot like whining, oh well...

This blog has been pretty inactive in terms of new articles over the past year. As a matter of fact, there has been a progressive decrease in the amount of new content since I first started in 2007. Compared to the other blogs I do, it is comparatively active, but there were only 36 new posts and 5 new pages.

Nevertheless, because some people appear to have linked to certain articles and because of posts related to controversial matters, there was an overall increase in the traffic. The average number of pages visited here is in the vicinity of 200 per day. But I will be honest and say that, to me, most of the good, important stuff is ignored. Feedback, which in the early days was frequent, is now next to nil. The number of people who "follow" is stuck at a mere seven...

The pages, in particular, were meant to begin giving an overview of the essence of the prema-prayojan philosophy in terms of sambandha, abhidheya and prayojana. Judging by the amount of response I get, nobody takes this aspect of my thinking very seriously yet. Clearly the content there and elsewhere on this blog will have to be published as a book so that people can see it as a comprehensive whole. Otherwise, how will they understand the momentous nature of this approach to our entire tradition and the tremendous transformative potential that it has?

But I guess that the obstacles are many. I am either not convincing or not charismatic, or simply too complicated, or not "out there" preaching enough... who knows? Maybe the fault is not with me, for as Ramananda Ray says,

One may elaborately
worship the friend of the suffering
with all the richest paraphernalia,
but the devotee's heart will only melt with joy
when it is filled with love for him.

For is it not that for only as long
as the belly knows hunger and thirst
do the delicacies of food and drink
bring pleasure?
(Padyavali 13)

Well, let us not lament. Perhaps because I have allowed my energies to be scattered, as my dear one tells me, and have thus not seen the vital importance of making a mission to present the Vaishnava Sahajiya philosophy coherently, or Radha-Krishnaism, to restore the centrality of the human and human loving relationships in sadhana, without which bhakti cannot be meaningful or even a worthwhile endeavor at all. Without human loving relationships, there is no meaning to loving God; the door of faith closes and one inevitably starts looking to labha, puja and pratishtha, or to material pleasures. It is as simple as that.

One may learn all the shastras, but if he has not become fixed in the Absolute Truth [of prema], then the result of his efforts is just the effort itself, like maintaining a cow that does not give milk. (11.11.18)

But it is not simply that, in contrast to the orthodox error fomented by premature sannyasis, human loving relationships are an essential element on every level of sambandha, abhidheya and prayojana. It is that we see the havoc that the stifling of the desire for human intimacy wreaks on those who have come to the devotional life with great hopes for attaining the highest perfection of human life and love. This is what happens when spiritual life becomes identified almost exclusively with sexual abstinence or indifference.

The worst of it is manifest in young devotees marrying or carrying on with non-devotee partners, losing complete sight of the secrets of happiness that were confided to them as their birthright, but were locked away by the misunderstandings of their guardians; a sublime knowledge and life-practice locked behind a wall of literalism. But you also see it in the continuing crust of misogyny and misdirection that permeates the sannyas culture and the ramifications such a culture has on both the new society of devotees and the larger Indian society where its fossils are still moving and kicking.

And as to the mundane sexually obsessed West, with its pincer illusions of pornography and romantic love devoid of the sacred connection or sadhana, it has fallen into a blind hole of Mariana Trench proportions.

The sexual, my friends, is the root of everything. Religion that denies sexuality rather than engaging it is on a course to hypocrisy, irrelevance and destructiveness. The path of love is that of understanding the sacred nature of śṛṅgāra-rasa, in the image of the Divine Couple.

Well, when the time comes, I suppose, and my sense of urgency about these issues grows, I will take more and more to publicly speaking out on them. There is more to this than talk, you know, it requires guidance...

Anyway, my Other tells me this is the only important thing that I was put on earth for, and all the rest is a waste of my time and misdirection. My other activities, however important they may seem to me or anyone else, are Maya, stumbling blocks, and a lot of lollygagging. So expect 2012 to show the influence of her lobbying on me.

SpiritsWalkWithMe said…
Yes Baba,
I am patiently waiting on you to write your book on Sahaja Sadhana for "Radha Krishnaism" as Steve calls it.
Please bless us with your book.
(is there a book in the works?)
Wednesday, 11 January, 2012