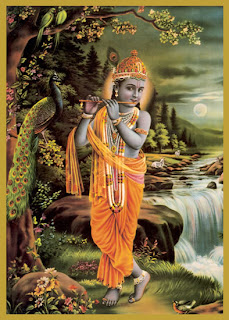 We have had a warm summer, and even September set a record for average temperatures for the month. Despite the warm weather, however, as I bicycled into work today, I saw a few trees that had turned entirely red or yellow. Some side streets were sprinkled with a speckling of color, dustballs of yellow or beige leaves tucked up against the curbs. And even though I was wearing shorts, the morning air had a bit of autumn bite.

October in Canada may not be like Octobers elsewhere. This is the Great Frozen North, and though global warming may be taking a bit of the edge off, October still means: You have to find shelter soon. Winter is coming.

On October 1, 1970, I entered the Hare Krishna temple on Beverley Street in Toronto. How I got there is the story of the summer that preceded it--a summer that saw me spiral downwards until there was nowhere to go but to the shelter that Krishna gave me. I can go backwards step by step, three years, remembering each preceding event that led me in the door to the bright yellow brilliance of the incense-soaked atmosphere, two shiny-headed brahmacharis inviting me in to complete the Vaikuntha effulgence of the scene. But, for the sake of this blog, I won't tell the story of my life, just the end of that summer.

I had spent most of it with a hippie couple, camping in St-Sauveur, where we pretended it was California by bathing naked near a waterfall, smoking pot, painting, playing the recorder, and reading books on Buddhism by Alan Watts and Timothy Leary. I had suddenly become vegetarian and the three of us were following some kind of macrobiotic diet.

The defining moment of that episode came when we decided to drop acid according to the guidance of Timothy Leary's The Psychedelic Experience, a manual based on the Tibetan Book of the Dead. As the LSD was beginning to take effect, we read something about "letting ourselves go, allowing ourselves to fall into the void," and suddenly I felt my entire being protest. I felt the intense presensce of a Person full of light behind me and I stood up and said with a burst of vehemence, "No! God is a Person!" My friends recoiled at the disturbance to the blissful deroulement of our mystical experience, and the rest of the afternoon was spent in no little discomfort.

Though there may have been other reasons for it, I left the next day and returned to Montreal, where I decided that I would become an artist. That was not to be, however, and I was bumped from one refuge to the next. Nevertheless, the experience that I had had in St. Sauveur kept me buoyant, and I felt as though I was in the hands of a protecting Savior and being guided to some numinous outcome.

I met some Christians who gave me a Bible, which I took though I felt little in common with them. I did read the Sermon on the Mount, and the following section really resonated with me.

25 "Therefore I say to you, do not worry about your life, what you will eat or what you will drink; nor about your body, what you will put on. Is not life more than food and the body more than clothing? 26Look at the birds of the air, for they neither sow nor reap nor gather into barns; yet your heavenly Father feeds them. Are you not of more value than they? 27 Which of you by worrying can add one cubit to his stature?

28 "So why do you worry about clothing? Consider the lilies of the field, how they grow: they neither toil nor spin; 29 and yet I say to you that even Solomon in all his glory was not arrayed like one of these. 30 Now if God so clothes the grass of the field, which today is, and tomorrow is thrown into the oven, will He not much more clothe you, O you of little faith?

Somehow, through this all, chanting Hare Krishna became a part of my life. My artist friend Ryan Larkin and a friend of his occasionally chanted, and eventually I went to the temple, which was not far from the McGill Ghetto, the neighborhood to the east of the university where most English-speaking students and hippies lived.

The first thing I remember seeing, on entering the temple, was the Brijbasi print of Murali Manohar (at the top of this blog entry). It was as though a primordial memory was awakened in me: I recognized this guy! I even remember saying, "This is what I have been looking for."

Ekayani, Gopal Krishna's wife at the time, was the only person in the temple, and she showed me around. She played the George Harrison Hare Krishna 45rpm for me, and Govinda Jaya Jaya on the flip side; and she showed me the new fascicules of the Bhagavatam that had just come out. Somehow or another I wheedled free copies of the second and third chapters. I remember being very attracted by the picture of the Lord in the Heart on the cover of chapter 2, something like the one shown here.

When I got home and started reading, the following verses in particular struck me because of their similarity to the New Testament verses above.

For this reason the enlightened person should endeavor only for the minimum necessities of life while in the world of names. He should be intelligently fixed and never endeavor for unwanted things, being competent to perceive practically that all such endeavors are merely hard labor for nothing.

Are there no torn clothes lying on the common road? Do the trees, which exist for maintaining others, no longer give alms in charity? Do the rivers, being dried up, no longer supply water to the thirsty? Are the caves of the mountains now closed, or, above all, does the Almighty Lord not protect the fully surrendered souls? Why then do the learned sages go to flatter those who are intoxicated by hard-earned wealth? (BhP 2.2.3-5)

By now I had become fully convinced that something was about to happen to me. I had nowhere to stay. Someone who was moving told me I could crash in the apartment they had already vacated for the last two days of September. 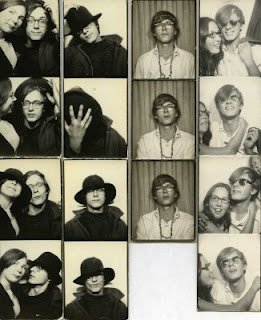 On the evening of September 30th, I was walking along Sherbrooke Street in a light snow shower. It was a pretty early snowfall, even for Montreal, but those first warnings of winter were definitely in the air. I saw a hippie walking ahead of me under the weight of a heavy backpack, and in the spontaneous generosity of the destitute, I asked him if he needed a place to stay for the night. I would not have been able to offer him a second.

When he came up, the first thing he did was to set up an altar on the floor of the completely empty apartment by propping up a picture of Vishnu against an empty beer bottle. Then he pulled out one of those japa malas made out of the big round red wooden beads that were used in the movement in those days, and without a word, began chanting japa in loud, deliberately enunciated syllables. The man did not say another word that evening, but I learned how to chant japa.

The next morning we hitchhiked to Toronto and joined the temple. As it turned out, this guru of mine was uncomfortable in the temple environment and never managed to stick it out, while I flourished.

So October, as Lafontaine says, is when la bise fut venue. But unlike the irresponsible cigale in the fable, who was sent packing by the industrious ant with a sarcastic, "Vous chantiez? Et bien, dansez maintenant!", who would have known that I would indeed dance that winter? And the next, and the next...