May 08, 2007
I have to mention that last night my son's choir (PCMR or Les Petits Chanteurs du Mont-Royal, "Canada's Answer to the Vienna Boys Choir") sang with the McGill Chamber Orchestra at Pollock Hall in downtown Montreal. It was, for me, the best concert that I had heard them give in the eight years my son has been with them.

After singing Bruckner and Vivier's Jesu erbarme dich a capella, the MCO came on stage with the conductor Boris Brott and they started Vivaldi's Gloria. The acoustics were so good and the choir so together, it was better than any recording I have ever heard of this famous choral work. The boy soprano and alto soloists were very good--in all these years, I have never heard Gilbert Patenaude give this much solo responsibility to any of the boys, so I assume that they are very special.

The encore was Mozart's Ave Verum Corpus, which once again was crystal clear and absolutely perfect in harmony and sound quality. It turned out we were sitting next to the conductor's wife and she herself told us how moving she found it. Anyway, for a musical ignoramus like myself, I am incapable of giving any critical comment except to say that I enjoyed the concert, so it was certainly encouraging to hear her confirm our enthusiasm.

After the concert, we spoke with a few of the other parents of those who have survived the full eight years with the Petits Chanteurs. Customary attrition over the eight years is about 50%, with this group it was only 33. They will soon be starting new adventures. Every year, a few of them go on into music related studies, as will Pavel, who will be doing doing a double major in piano and life sciences at Collège Brébeuf.

In a few days, the boys will be giving the main concert of the year, which is a fundraiser for the tournée in Austria this summer. Québec's national folksinger, or poet laureate, or national treasure, Gilles Vigneault will be "participating", meaning that he will be reciting some of his poems and perhaps singing a few songs with the choir. The concert itself will be a recital of Vigneault's songs as arranged for choir by Gilbert Patenaude. So if anyone is in the Montreal area, here's the invitation. 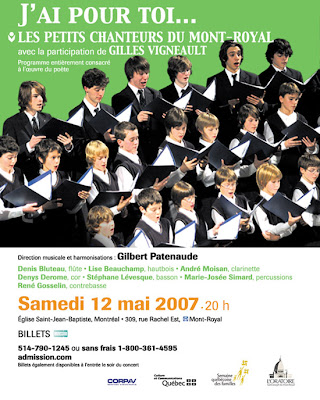