These days, I take the bus down Sauvé every day.
Sauvé, how ironic in a synchronistic way--
What Frenchman was saved, from what and when?
From death? From damnation? Now some latter next of kin
has bequeathed his name... redeemed are those who walk this street!

Today I walk; it’s sunny and spring, I feel brash;
I bounce my mala before me like a proud panache--
my banner, my identity, my mark of salvation, my dance
on this road of tenements housing Arab immigrants.
Between two cages, work and home, the japa walk is sweet.

Sauvé becomes Côte Vertu as it starts heading west;
The names waken whimsy that appears like a guest--
Does scaling the hill of virtue lead to salvation,
or does one climb that slippery slope after liberation?
Am I headed in the right direction? Need I retreat?

More ironies… just a hop across these cinder blocks
lies another immigrant generation's white duplex.
I often think of you, as I pass, you of the last Greek sign,
for that is where you sat, in your basement, as I in mine,
just meeting incognito in the world of cyber space.

There was a blessed feeling to those days, a glow
that filled my soul, a luminous sense of "yes, I know";
it made me offer myself to you, in all innocence,
as a bridge to my source (not as a fount of omniscience!).
Oh the hubris! You played Nemesis! End result: disgrace.

Fitting indeed is your name, Omega: That was the End.
I did not break, but even then, my dear, we all must bend.
Every Omega is an Alpha, you in more ways than one.
In my present Purgatory, something new has begun;
in this incredible lightness of being, there's a trace

of visions coming true, of realized insight's weight,
of hope that between Scylla and Charybdis lies an open gate.
So more than anything, this is an apology. You were correct:
I was not "wysiwyg"; there was, still is, a disconnect.
You can speak truth, but without being truth, you're just a cheat.

It has been a wearisome week since these poor lines began;
Thoughts and words haven't flowed as they sometimes can.
The days of rain, snow, wind and sleet told me it's not over:
pain, confusion still run deep. Guru is a kind of lover,
but for all his airs and auras, just a man. It is grace

that you found me wanting. The gods are meant to bring us down
from our flimflam, falseness, fourberie, fraud. And when they frown,
it's nothing but their mercy... Is knowing that salvation?
Is not the discipline of yoga self-satisfaction?
But santosh without sadhu sanga is a complete waste!

What's more: santosh without atma pratishtha's even worse,
And santosh without prema bhakti, the ultimate curse!
In the struggle of the selves, the innermost self must win.
Sri Guru is the guide. The rest is vanity and sin.
--o)0(o--
tat te'nukampAM susamIkSamANo
bhuJjAna evAtma-kRtaM vipAkam
hRd-vAg-vapurbhir vidadhan namas te
jIveta yo mukti-pade sa dAya-bhAk
--o)0(o-- 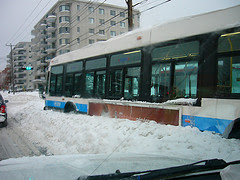 Bus stuck in snow on Côte-Vertu.