A little bit about my son

December 01, 2006
Here it is Friday, already, and I never mentioned the concert I went to last Sunday. My son is now in his last year of high school and he has been singing with Les Petits Chanteurs de Mont-Royal since fourth grade. This is a choir that is associated with one of Montreal's most prominent landmarks, St. Joseph's Oratory.

This large church, which adorns the hill that gives Montreal its name, can be seen from 50 kilometers away on a clear day. It is a strange sensation to have this kind of direct association with such a prominent landmark. As a result of his participation in this choir, Pavel has been able to go to one of the oldest and most prestigious private schools in the city, Collège Notre-Dame, which is just across the street from the Oratory. The picture that I posted here would be what my son sees every day when he steps out of the front door of his school.

Last Sunday, he and the rest of the boys in the choir participated in a concert of Mozart's Requiem at another of Montreal's historic churches, La Basilique Notre-Dame. There were several other choirs involved and l'Orchestre philharmonique du Nouveau Monde under the animated direction of Michel Brousseau. Notre Dame is a fairly extraordinary church both inside and out, as you can see from this photo. 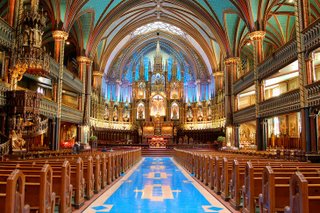 Every year, the boys sing here, as they will again in two weeks for their annual Christmas concert. I just wanted to speak proudly of my son, which I do not do often enough, especially as he is going through his truculent adolescent period. Nevertheless, he has stuck it out with the choir for the past 8 years, and has gained a lot from the experience, musically, culturally and socially. And it was a great delight to hear the Requiem being sung richly by more than 200 voices, including his.