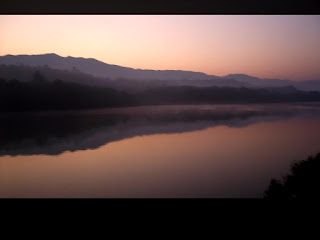 As if in preparation for my return to Vrindavan, a Bhagavata saptaha has been going on within close loudspeaker distance, with a very good musical team. We have been graced with renditions of the best of Rasik Pagal, Gaurav Krishna Goswami and Vinod Agrawal's greatest hits. It has had a nice effect on me.

In the meantime, I am reaping the benefits, slowly of my Yoga Sutra work. Today I was working on 3.18, which says that by concentration on samskaras, one can know one's own and other's previous lives. Since I don't have much time left and still quite a bit of work, I was going to avoid evening meditation, but something impelled me to go today.

So, quite buoyant actually, with the Bhagavata going on this way, and the Yoga Sutra going on that way, I sat down in meditation and started thinking of YS 3.18.

I should say that earlier in the day I had been in the library for a moment when I saw, to my surprise, a copy of Neal Delmonico's PhD thesis about Rupa Goswami. I was doubly surprised because it was not my copy, which had come with my books, but had been nicely bound. Needless to say, I was quite astonished that Swami Veda should have been so interested in Bhakti-rasāmṛta-sindhu [his own copy of BRS is well marked with signs of his having read it closely] that he had procured a copy of Nitai's thesis. So, quite amazingly, there are two copies of it in this Rishikesh library! Perhaps nowhere else in the world is there such a concentration of interest in Nitai's work!

When I took took the book down from the stacks, a folder dropped from between the books. It contained a typewritten letter written by Swami Veda in 1952 at the age of 29 when he was applying for his postgraduate studies in Holland. In it, he gave a some of the details of his life, most of which I already knew. Nevertheless, SVB's story, his life adventure, his clear sense of identity, his personality, his ambition, his worldly situation at the time -- all was very clear. This reminded me, in sum, of his saṁskāra.

But of course I have known Swamiji for many years now. I have worked on many of his books and have allowed myself to learn from him and to take his blessings. I talked about that before also.

Like a mirror, a person takes on the qualities of those with whom he comes in contact. One who is intelligent should therefore seek the company of those who have the same ideals in order to develop their good qualities in himself (BRS 1.2.229).

And I also meditated on my own saṁskāras, my own story, who I am and so on. One commentary (VA) in YS goes like this:

The last few days I have really been thinking of how great my life is; how lucky I am to have had this great adventure of bhakti and Krishna prema, and I can list all the wonderful things that have happened to me on this journey, but not now.

So all these things were passing through my head, how all these languages and texts and sadhanas have become known to me and practised by me, and how I have been so extremely blessed in so many ways, by so many gurus and friends. It was, in part, in response to a recent FB discussion in which I found myself telling the world that I owe it all to Prabhupada, much as I did in this article: Guru, Grace and Gratitude. Prabhupada used to say that we were fallen yogis who had taken birth in the West just so that we could take part in spreading the sankirtan movement.

Then by meditating on my saṁskāras and Swamiji's saṁskāras like that, I had a vivid vision of myself as a young Bengali in my early teens wandering through the Himalayas, along the Ganga and in the caves. With jatas and a brownish loincloth. And I saw that Swamiji had been my yoga guru in that other life. But I left the mountains and went to Vrindavan, as I will again, and again.

As I came over to the library to get the internet, the ether was resounding with glorious calls of "Jai Radhe! Jai Radhe! Jai Banke Bihari Lal ki jai!!" I could feel the dancing.
Autobiographical Neal Delmonico Swami Veda Bharati Yoga Sutra

Turn up the music real loud so everyone can hear(:

Jagadananda Das said…
Done, as instructed. And a very blessed blast from the past. Certainly this song defines us as much as Hare Krishna did. Maybe more. Thanks.
Monday, 15 June, 2015

Prem Prakash said…
Those four lads from Liverpool expressed more beauty, more shakti, and had more fawning young ladies around than anyone from ISKCON in their wildest dreams of grandeur. Who really was the better channel for Krishna consciousness?
Wednesday, 17 June, 2015

Jagadananda Das said…
What we enjoy is the specific cultural content of our religion. The abstract portions are expected from everyone, regardless of the historical religion's superstructure. But we love us our superstructure.

According to some, that would be illusion. According to us, that is bhakti. You don't love an abstract, a generalization. You may have some sentiment for an abstract concept, but love requires something more concrete, specific.

But I certainly did play this for my friends in the ashram who had never heard it. Different country, different generation. Never even heard of the Beatles.
Wednesday, 17 June, 2015

Prem Prakash said…
I figure God has to come to me in a form I can understand and appreciate. Some might call that an illusion, but it feels to me like an expression of love.
Thursday, 18 June, 2015


By The Light of the Magical Moon:


Roll Away Your Stone:


Lover of the Light:


Me and You (Naturally Sweetened):