Making and breaking silence in Rishikesh

January 20, 2015
Yesterday was Mauni Amavashya, or Silence Day. The ashram arranged a special program of meditation and related activities which included all the paid staff, including gardeners, cleaners and office workers. Since I am have gotten back on my daily schedule of about 4-5 hours of meditation, split up into four sessions, I thought this provided me with a good opportunity to go for "asana siddhi" which according to Swami Veda Bharati means being able to sit in one's meditative posture for 9 dandas or 216 minutes without moving. I almost made it and it looks within grasp. All in all, I sat for nine hours, which I don't think I have ever done before. My lower back has become quite strong over the years, but today it was groaning. My knees are surprisingly unaffected.

I usually take a nap after lunch, and although it is customary to wake up after a midday nap, especially in winter, with a bit of a drag in the consciousness, I was for other reasons feeling a little down and even pessimistic. For some reason, I put on a prominent tilak marking, which I confess I do not do every day [usually only when I am giving a class or doing kirtan] and went for a walk by the Ganges. There was a cold breeze and the sun was feeble. I was hoping that my dress would at least attract the appearance of another Vaishnava or Vaishnava sympathizer, even though I was committed to silence for the day.

There is a Radha Vallabhi ashram not far from there, and I am friendly with the Mahanta. He usually takes a daily stroll along the Ganga with one or two of the others at his ashram and it is always a delight to see him with his Vrindavan swaroop, but no such luck today. Only one or two strollers acknowledged my presence with a furtive pranam. The general state of India in this new age of increasing materialism seemed to gnaw at my belly. My pessimistic feelings only increased. And at the 5.45 meditation session my mind did not get absorbed in samadhi of the Holy Names and meditation on the ishta as I have now become accustomed to.

Swamiji asked me to come to his room afterwards. I stood there waiting for him to finish some personal business, looking at a beautiful miniature of Radha Krishna on his wall, and a truly magnificent three-foot marble of Krishna playing the flute and the other knickknacks in his room. When he came back in he asked me if I knew Vaishnavacharya Shree Abhishek Goswami﻿. I said that I did.

Actually, I have never met Abhishek Goswami, but Swamiji told me long ago that he had taught him meditation and that he was a childhood friend of his son, Angirasa Arya. Abhishek is of the Radharaman family and lives in the Ghera, but now has an expanding following as he takes up his dharma of being a Vaishnava acharya speaking on Bhagavatam. But he had phoned Swamiji earlier in the day to invite him to participate in the 500th anniversary of Mahaprabhu’s discovering Vrindavan. So Swamiji wanted me to speak to him and convey some messages to him. Swamiji’s physical condition is so poor that even to talk is for him dangerously enfeebling, so he had me break my vow of silence to act as a go between.

So I talked to Abhishekji for several minutes after he got over his surprise at hearing my voice instead of Swamiji’s. I was so enthusiastic to hear the sound of a voice that was emanating directly from Vrindavan, and Radharaman at that! Swamiji gave his blessings and I told Abhishek to send Radharaman’s blessings right back at him!

I told him I will be back in Vrindavan on the 24th to participate in Satyanarayan Dasji’s abhishek as a Mahanta in the Virakta Samaj and will see him while I am there. Needless to say, my whole mood completely changed. I even told him that I had put on tilak that day in the hope of attracting the mercy of the Vaishnavas, and Radharani had made exactly such an arrangement. I think Abhishekji Maharaj also picked up on my enthusiasm and we ended our conversation with a joyful round of "Jai Sri Radha Ramanlal ki jai!" and "Jai Sri Radheeee Shyam!"

"That was fun" I wrote on Swamiji's slate afterwards. He gave me a wry smile in response.

Radharaman has not forgotten me, even in exile... 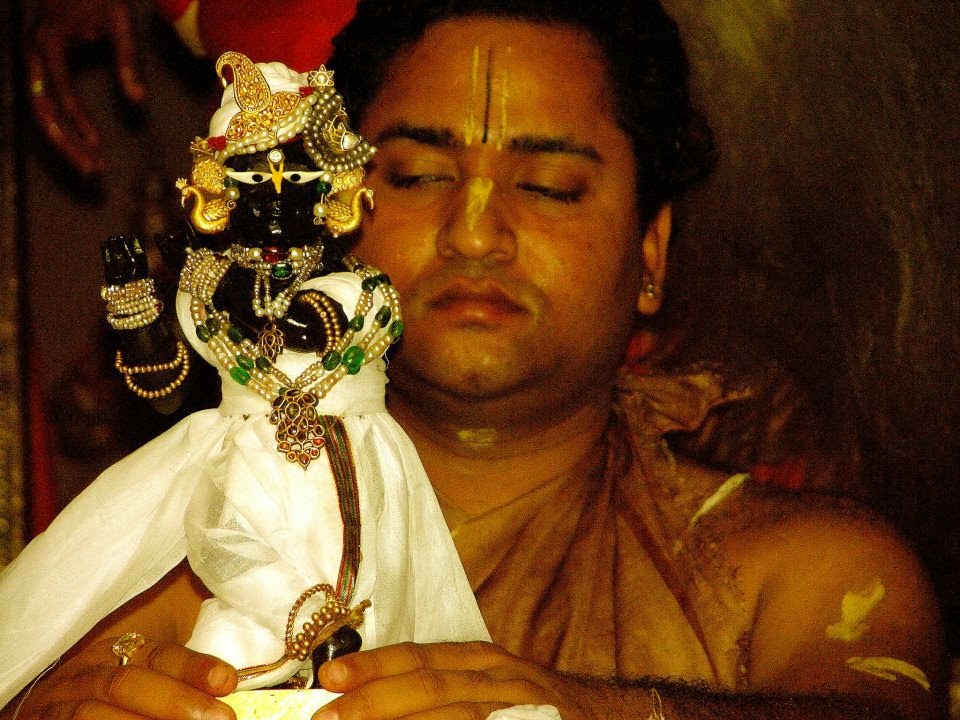 From time-to-time one reads through your past posts, a love of reading the words of another on the true path of yoga.

"Since I am have gotten back on my daily schedule of about 4-5 hours of meditation, split up into four sessions"

One hopes the rare ornament of meditations true tilaka will appear between your eyes.