The Bhaktivedanta Charity Trust has given around Rs 4.5 lakhs for various renovation and construction projects around the ashram. The work is currently halted as another two lakhs is being sought to complete the work that has been begun. It seems also that there is a prosperous element in the local community that wishes to see the archeological heritage of the town preserved and restored, and some of that money has come to the mandir, particularly where the Shiva temples and Kali temple are concerned.


The BCT money is mostly going to the construction of a guest rooms and a dining hall. I find most of it aesthetically dubious and without a clear vision, but there is little that can be done about it now. This criticism applies to some of the earlier construction, such as the toilets and bathrooms built just off the ten Shiva temple area. The last thing you see as you close the toilet door is Prabhu's samadhi mandir. There is plenty of land and surely another arrangement could have been made. If we get more money then perhaps this can be knocked down and rebuilt somewhere else.

As stated above, the Kali temple is being renovated and the agreement with the donor was that the the Jagannath deities should be placed in it on completion. Hari Gopal Dasji is dead set against it because our Prabhu said that too many animals had been sacrificed there. Besides which, it would be outside the temple compound and directly facing the entry gate. The question is currently up in the air as to what use it will be put to. It has been whitewashed and they took the bamboo scaffolding down today. It seems that it could have been painted first.

They are also thinking of building a nat mandir in front of the Kali temple, which is logical, as that is where a pandal is set up during festival times (Bhadra 18 is the main day for Bhaktivinoda Thakur's birthday). A lot of people still come, apparently 1500-2000 for a week of Bhagavata and so on. But this needs to be carefully thought through and some kind of overall plan made.

The Mandir ethic and spiritual life

There are four men and four women staying in the ashram. The women cook and take care of the cooking area. I am not sure what the men do. Gaur Das is the pujari and seems to do the lion's share of the work. This morning no one came to mangal arati. Everyone is fairly advanced in age. Badol (Banshi Das) is a bit younger than me. Haridas is 57, he told me yesterday.

We have been having path-kirtan since coming and I was a bit surprised to see that about fifteen people are turning up regularly. Some of the classes and kirtans have been very nice and the local devotees were quite enthused. Most of these people do not strike one as the "usual suspects"; they are not devotees with tilak and mala, but they support the temple and its activities. Several of them expressed great eagerness for Hari Gopal and me to take a greater role and help to expand the activities.

One thing that drived me a bit crazy is the parigraha. It seems that nothing gets thrown away. The main building is a bit of a labyrinth, and everywhere you turn there is a pile of useless crap, old boxes, just garbage, or styrofoam. Then there are piles of potatoes under a cot, or banana bunches, or whatever.

Of course, with so much construction work going on, it is natural that there should be piles of sand, old bricks, bamboo, steel rod for reinforced concrete everywhere. Cooking is done with firewood, which is stored wherever place can be found. There are also a lot of rotten old wooden window frames or doors, and then old unused wooden book almiras, usually filled with empty bottles and other useless flotsam and jetsam. Someone needs to dig a big hole or make a big bonfire and get rid of it.

The electric wiring is absolutely nuts. Sixty years of adhoc repairs and additions. A total rewiring is needed. And everything is covered with dust and cobwebs. 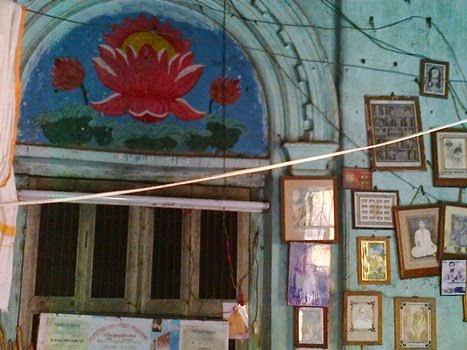