Getting terminated at Munger temple 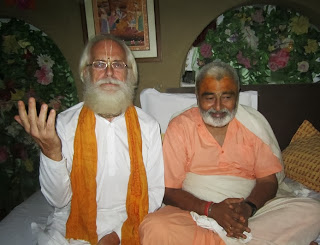 I suppose it was only to be a matter of time before it happened, but last night Sadhu Maharaj asked me to discontinue giving my Rādhā-rasa-sudhā-nidhi classes. After discussion, I understood that his principal objections were that I was deviating and that what I said was rasābhāsa.

I suspected that there were in all likelihood more factors involved in his decision. No doubt he was starting to get feedback from those who were starting to dislike the fact that I was speaking in a Gaudiya Math affiliated temple. But the first thing he said to me was something to the effect, "I cannot follow what you are saying. I am a simple man. I want to hear Radha-Krishna kathā by the book. I told you to speak to the verses and not say anything of your own. I am now seventy years old, I don't have time for anything else."

Innocently enough, I explained that Westerner devotees have no understanding of Radha Krishna lila and without a proper background, explained to them in ways that are relevant to their own experience. And I offered to speak to him in Hindi for a Hindi-speaking audience, for whom the style of presentation would be quite different. It is just that this time, the audience was mostly Western and I said what I thought they needed to hear in order to understand just what Radha and Krishna are. They are not figurines on an altar or "little Krishna" cartoon fairy tales. I am afraid that is going to cause waves when the orthodox position is fundamentalist and literalist.

It is true that over the last two days, indeed from the beginning of the classes, I have been getting progressively more honest and more elaborate in my explanations. The last two days, in particular, I had been speaking rather strongly about things like sannyas. Nothing different from the stuff I have said on my blog, but speaking out loud in mixed company brings out their controversial nature.

Some may find my positions meaningful despite their controversy in the Gaudiya Math milieu, but it is more than likely that others have complained that I am speaking apasiddhānta. But when you mix Freud and Jung in with Radha and Krishna, there are VERY few people in traditional Vaishnavism of any branch that are going to be able to swallow it.

I expected that sooner later I would reach the limit of Sadhu Maharaj's liberalism and open-mindedness. But it was a good experience. I am extremely grateful to him. Nevertheless, because in the last two classes I gave, I found myself speaking to riveted audiences and I found myself getting rather fond of speaking to people for whom my point of view is both incisive and persuasive.

Some may think that my goal in coming to Sadhu Maharaj's domain was to convert his disciples or followers. I should therefore have expected expulsion. Of course, my primary goal was truly to speak of Radha, but my Radha is MY Radha. And so I will explain my Radha to you if you come to listen to me. But my purpose is only to glorify Radha and to seek to understand prema by looking through the eyes of those who glorified Radha in the past, as well as through my own.

Sadhu Maharaj helped me to find a little more of my voice and for that I am exceedingly grateful. He took a risk in having me speak at his temple. Perhaps he was not fully aware of the depths of my depravity and apostasy. As a matter of fact, only a few months ago, I confided to him that I was feeling that did not know if I was ready to teach yet and he gave me his blessing, saying that he sensed my time was coming near. I remember feeling quite pleased by his blessing.

But serious teaching should only be done if one has something more than repetitions of things other people said. If one can weave those things into a coherent and meaningful pattern for people. For those in the West, they have to "cross over" so to speak from their conditioned state into the world of Vrindavan. The gulf is wide. The conditioning is very deep and intricate and the Western critiques of religion are extensive and well thought out.

And those who claim to be preachers KNOW that in most cases they are swamped and incapable of dealing with any intelligent critic other than to hide in the bunker labelled "a 5000-year-old authentic religious tradition."

And we have Rupa Goswami on our side. Rupa Goswami is not a theologian, he is more a psychologist who has given us a guide to cultivating sacred love. But that requires expertise. It requires study. It requires knowledge. You don't become a scientist of sacred love without real life experience. Book learning ain't gonna do it.

In a way, it may just be that I had to find my voice directly in the IGM environment. Telling them exactly what I thought clearly. So really it was totally expected, and I have made my statement. I don't know that I consciously was intending to do that. After all, I was on their territory.

It is his place, why should I not honor his wishes? I said that I spoke to the audience, and that unfortunately he was the only one on that level. I would gladly arrange to do that also, but with the audience of predominantly non-Indian devotees who have come through the IGM mill and are practically out the other side, that I should say what they need to hear. Then they will actually be able to taste Radha Krishna katha, but right now, man, there are very few who are past the children's coloring book stage.

Parikshit said…
I have always appreciated, relished, and have benefiited from Sri Jagadananda Maharaja's understanding through reading his blogs. Many people wish to remain coloring cartoons as the real world otside of the book shatters their dogmatic and malafide vṛttis, which they enjoy in the name of God consciousness.
Wednesday, 23 January, 2019