Radhasthami and the day after 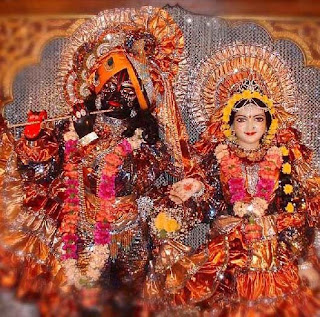 I took Philippe, my friend from work, to the Montreal temple yesterday to introduce him to Radharani.

There is an irresistible force leading all followers of Lord Chaitanya to Radha. They can't avoid it. Even so, Vishwambhar, who has been a devotee since 1968, began his lecture by reading a statement from Srila Prabhupada warning against Prakrita Sahajiyaism. But then he went on to explain Radha-tattva from the Chaitanya-caritāmṛta and tell some stories from Camatkāra-candrikā and so on. He more or less made it through alright and it was nice to listen to, even though he hadn't gotten to the yugala-milana when time started running out. He said, "Well, looks like time is almost up. I don't think I'll have time to finish." I couldn't help bursting out, "Get to the yugala-milana, man. You can’t stop now." But it was completed in haste.

The kirtan was a noisy rail-gari affair ("Rail Gari" is a nickname I once got in India for my kirtans, which rushed headlong like a steam train). After a while I had to find refuge with Philippe in the prasad hall where we waited for prasad, which was excellent. Montreal temple has some very good cooks. And I had a guest to talk to and show around. The devotees were all extremely cordial to me, though I mostly talked to Philippe.

In the car on the way back, we talked about the kirtan. has a musical background and did many years of voice training in opera. Through a yoga teacher friend he was introduced to Patrick Bernard (Prahlada Das)'s music, which is when he met me. Prahlada sings mantras from a variety of sources, including Buddhism, Christianity, Judaism and other Hindu traditions besides Vaishnavism. Most of his records do contain a preponderance of Vaishnava material--as a matter of fact, in the car, Philippe had a CD playing which has paraṁ vijayate śrī-kṛṣṇa-saìkīrtanam on it. So Prahlada is introducing some pretty Vaishnava material to his public.

On Saturday last, we went to Patrick's concert in a village called St-Césaire about 50 kilometres east of Montreal. The site was pretty extraordinary—an old convent chapel. There were about 100 people there, many of whom are his devoted fans and followers. His program has become more professional since he was joined by his partner, Anuradha Dasi. She is a disciple of Bhakti Promode Puri Maharaj and they work closely with his successor, Bhakti Bibudh Bodhayan Maharaj. Anuradha is a pretty good organizer and I think that she has had a positive influence on Prahlad. She also puts together trips for their fans to go to India and stay at Puri Maharaj’s math in Mayapur and Jagannath Puri. Many of them come back with neckbeads and japa malas. 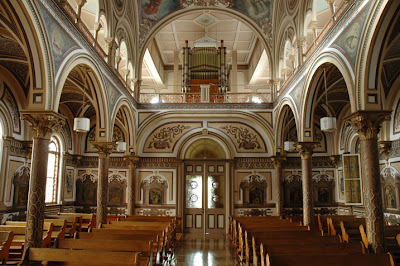 Anyway, Patrick’s concerts, accompanied by Anuradha’s dancing, are very meditative in nature. His thing is mantra meditation and his music has as its goal to create an atmosphere conducive to interiorization. Thus there are periods during the concert where he repeats a mantra over and over for ten minutes or so, with certain harmonizations and musical accompaniment that keep it from becoming too monotonous.

With the only light coming from candles and in a building that already had a strong spiritual aura, the effect was quite powerful. It was more or less the opposite extreme of the Iskcon kirtan. I may be getting too old, but the testosterone soaked kirtans of the 70’s just don’t do it for me any more. But I want more than undifferentiated mantras. Patrick said to Philippe on the night of his concert, “It is not the words that matter, but the movement of the heart.”

I could not agree with this, as I think both matter, but at the time I said nothing.
Bodhayan Maharaj Iskcon Patrick Bernard Prahlada