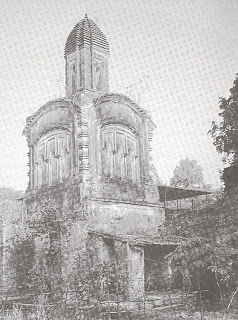 This is the old Ula Chandi temple at the Birnagar Dwadash Mandir. This building, along with another Durga temple and ten Shiva linga temples form the complex which became Lalita Prasad Thakur's bhajan ashram. His room was in the Durga temple, and Gaur Gadadhar are upstairs in the same building.

The temple complex would have been the site of rather elaborate goat and buffalo sacrifices for the annual pujas, as described by Bhaktivinoda Thakur in his autobiography.

The Chandi temple, built by the Mustauphis (Bhaktivinoda Thakur's mother's family) in probably the 18th century, fell out of use during the cholera epidemic that wasted the town of Ula in 1857 when Bhaktivinoda was 19 years old. The building has been used of late as a goshalla and a place for storing wood.

I have to disagree with your identification of this building as the Ulachandi temple. UlaChandi is present elsewhere in Birnagar. People still go and worship her in the form of a large un-iconic stone. There is or was a mandap (roof with columns) over her. Local caste Hindus worship her with fruits and jaggery, but tribal folk sacrifice pigs to her. The photo of the temple that is displayed here was a Kali temple where the Moustafi family would have a huge annual festival. Thousands of goats and buffaloes were sacrificed there before the plague hit Ulagram.
How do I know this? I lived in that temple for quite some time and Lalitaprasad Prabhu told me. Then the floor was dirt and there was only a single wooden bed frame inside. I developed a very horrible illness while living there and thought I wouldn't survive it Possibly from residual bacteria (staph? anthrax spores?) left behind from the high volume of animals sacrificed in that spot. I developed extensive boils and carbuncles, and I was diagnosed with diabetes by the local doctor, a diagnosis that turned out to be false. Nevertheless, it was a very powerful place--a pack of jackals and a large white owl were my regular visitors there at night.
Tuesday, 21 August, 2018

Jagadananda Das said…
You are absolutely correct and I have no idea how I made this mistake. It must have been because this post was made when I was still in Canada and hadn't been here in more than 20 years.

I have been intending to go and take some photos of the Ula Chandi site.

This error has been corrected where there are more recent pictures of this building. I am trying to find other old pictures of the building from when Prabhu first fixed it up in the 1930's.

Badol Da was just telling me the other day that the harkat that was used in sacrificing goats, etc., is actually buried in the temple floor. He said that when it was buried, it was still covered with the dried blood of the animals. I have no idea why they did not throw it out or bury it elsewhere.

The owl or its descendants are still there. But I haven't heard any jackals. On the other hand, in Mayapur at Gadadhar's place, the jackals are all around and wailing and howling through the night, coming right nearby. It is a little disconcerting.

Harigopal (Bhakta Das) is still trying to figure out what to do with it. Some local people paid to have the building cleaned up and plastered, but Prabhu said many years ago that the building cannot be used because it was so contaminated by the sacrifices.

I would be interested to find out where the other places referred to in the Jivani are, as there are a few other temples around here. Which ones were which -- Jagaddhatri, Dinadayamayi, etc. are some of the names he mentions, and he talks about a nava-chura temple, but I don't see any temples with nine spires. It would be nice to include photos in the Jivani if I can ever get things published. Money... you know how it goes.

Nice to hear from you and I am glad you are still hanging about. I offer you my hundred obeisances and affectionate premalingan. Everybody here always asks about you and I also think about you often.