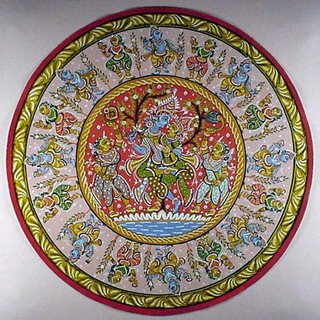 A lot has been written about androgyny from a variety of perspectives in recent years, mostly by Jungians and those various religious tendencies that find Jung's ideas useful. These persons tend toward New Age type philosophies, or what Huxley called "the perennial philosophy," doctrines that generally make us in the Vaishnava tradition recoil because of their great fluidity and ultimate indifference to the principle of bhakti. In fact, they look a lot like the Hinduism that Gaudiya Vaishnavas feel uncomfortable with and reject as impersonalism.

At the very least, if the Jungian goal of psychological individuation, which is characterized as a coincidentia oppositorum, is the ultimate object of the spiritual quest, then it seems to us not to really be "the best story," but only a part of it, as much as liberation is only valued when seen in the context of prema bhakti.

In order to follow up on this subject, I have been reading a number of works on the subject of late, but I find them to be written from an encyclopedic perspective that attempts to catalogue every incidence of gender fluidity that can be traced throughout all time and place. The effort of the archetypal psychologists is evidently to prove that the androgyne is a universally meaningful archetype, which stands in opposition and is subversive to the patriarchal (read monotheistic) model of religious understanding, and that it represents something truer to organic human development.

Those of us who have been initiated into spiritual life through Iskcon--especially with a previous samskara in Christianity--have patriarchal attitudes deeply bred in the bone. Even when it is possible to state that the Deity is "androgynous" as Neal did in the article quoted earlier, no ulterior messages are drawn from the fact, for it is easier to see that God's beginnings are as the "purusham," or "adi-purusha." In this optic, the feminine is always secondary, as is Eve drawn from Adam's rib.

I have been vocally expressing my sympathies for various aspects of Jungian thinking, and by repeatedly citing the Brhad-aranyaka passage which visualizes the Divine Being as "a man and woman locked in embrace," I have shown a seeming preference for this psychologism, a kind of reductionism which envisages psychological health, or psychic balance, to be simultaneously the goal of religion and psychology to be best symbolized either by the Divine Couple, or Syzygy in Jung's vocabulary, or the Androgyne. I find it not coincidental at all that these two archetypes are seen in Chaitanyaite theology as one and the same, or two manifestations of the one same thing.

But I realize that there is a serious conflict of opinion in the theological analysis of these symbols. Let us look at the stories that are involved. The meta-story of all Hinduism is that we are all eternal spiritual beings who are attempting to find our pristine divine nature, which when we do will bring us infinite beatitude.

This story is basically the same for Mayavadis as it is for most Vaishnavas, with the difference that for the latter, the goal is one of a personal relationship with Krishna, while for the others it is the realization of one's identity with Brahman. It is not altogether surprising, since both doctrines draw on the same sources; thus, the prince who has forgotten his identity, or the man who has lost his treasure, are concepts that fit well with both belief systems.

These doctrines, however, seemingly have no place for evolution. Though the Upanishads state that God alone, i.e., without his creation, is somehow incomplete, that he needs to be many (bahu syam), or at least Two (sa dvitiyam aicchat), and that his "Self" satisfaction comes from the fact that there is no real difference between Him and His creatures and that altogether they form a single Whole. We could say that this multiplicity is God's need for an infinity of stories. And the best stories are about heroism, not fortune, or at least not fortune without heroism.

When I started this blog, it was to respond to the questioning of a single insight, namely the idea that there are two wings to the Chaitanya Vaishnava swan. I called one Orthodoxy and the other Sahajiyaism. I see the two positions as having a fundamental symbiosis, as male to female. As I stated recently, the Original Person and his lilas and their reflections in the stories of the infinite jivas are linked as bimba and pratibimba. The infinite and perfect nature of God only becomes meaningful to us through our yearning for the perfection that is imperfectly manifest in our experience.

But of course, this desire for perfection is the fundamental cry of the soul. It is instinctive, and the fundamental reality of this desire, i.e., its attainability, is confirmed in the flashes of eternity, consciousness and bliss that we experience. So in this tale there are two stories: One is the desire to return to Krishna, to be absorbed in His eternal perfection. The other is the encounter with God as the Other in this world. The two seem to be exclusive as monotheism to pantheism, but it is my conviction that not only are they not exclusive, but are complementary on the deepest level of spirituality.

It took a while before posting this article, and I still feel a certain dissatisfaction with the results. But there you go. I decided to put it up anyway, as another opus waiting for Time to fill it out.

Go to Part I

Mircea Eliade. The Two and the One, trans. J.M. Cohen, Chicago, IL: University of Chicago Press. 1965.

Elémire Zolla. The Androgyne: Fusion of the Sexes. London: Thames and Hudson, 1981.

Lanier Graham. Duchamp & Androgyny: The Concept and its Context