October 25, 2006
I spent those nights in Radha Kund;
I had one long dream of Vrindavan.
And I awoke, hearing shukas and sharis,
watching the sunlight waft over
the smooth and spotless sheets
of my North American bed.

I thought to myself:
Surely Radha and Krishna have left me a garland;
surely there is a legacy of prema left by this dream
that will embrace the world,
that will envelop it like a veil.

But as I look again,
I see that I was given
a strange gift--a sword,
which runs me through,
which beheads my world,
which punctures all my colored balloons.

I am exposed: Am I unable
to carry the sword of conviction,
though like a beast of burden,
my back has been made strong
from bearing the bricks
of so many sweet theories?

Unlike Rabindranatha's maid,
my yes is not so ready made.

I thought I should ask of thee - but I dared not -
the rose wreath thou hadst on thy neck.
Thus I waited for the morning,
when thou didst depart,
to find a few fragments on the bed.

And like a beggar I searched in the dawn only for a stray petal or two.

Ah me, what is it I find? What token left of thy love?
It is no flower, no spices, no vase of perfumed water.
It is thy mighty sword, flashing as a flame, heavy as a bolt of thunder.

The young light of morning comes through the window
and spread itself upon thy bed.
The morning bird twitters and asks,
'Woman, what hast thou got?'
No, it is no flower, nor spices,
nor vase of perfumed water
- it is thy dreadful sword.

I sit and muse in wonder, what gift is this of thine.
I can find no place to hide it.
I am ashamed to wear it, frail as I am,
and it hurts me when I press it to my bosom.
Yet shall I bear in my heart this honour
of the burden of pain, this gift of thine.

From now there shall be no fear left for me in this world,
and thou shalt be victorious in all my strife.
Thou hast left death for my companion
and I shall crown him with my life.

Thy sword is with me to cut asunder my bonds,
and there shall be no fear left for me in the world.

From now I leave off all petty decorations.
Lord of my heart, no more shall there be for me
waiting and weeping in corners,
no more coyness and sweetness of demeanour.
Thou hast given me thy sword for adornment.
No more doll's decorations for me!

When I first read the poem, I admit to having first thought of the phallic implications of the sword. This is not just because I am a man and I see phallic symbols everywhere. Really there is no difference between a phallic symbol and what this sword symbolizes in the poem--empowerment. Men need swords as much, if not more, than women do. This comes of something called "castration anxiety," which men need to overcome. Overcompensation of macho characteristics is, to me, the great malady of the male psyche. Manjari bhava is the medicine I prescribe.

The idea being that prema is ultimately more powerful and more resilient than the sword. The indication here being that the love of God, the only Purusha, in relation to whom we are all Prakriti, precedes genuine heroism, which comes in equal measure to man or woman in this world.

And this makes it important to give the context of where I found this poem. I am reading a book about Kabir by a well-known Indian scholar, Hajari Prasad Dvivedi. Dvivedi is a very entertaining writer, even while being informative historically and critically. Besides this, he is a fan and follower of Kabir, which altogether makes a mix that I find particularly appealing. He quotes Rabindra and other Bengali works, including Vaishnava ones, though writing in Hindi.

The first poem he quotes to begin the chapter is centered on the metaphor of a veil, the meaning of which is somewhat obscure. One thing we can be sure of, however, is that the veil is a feminine symbol—it is enclosing and covering, protective and soothing. 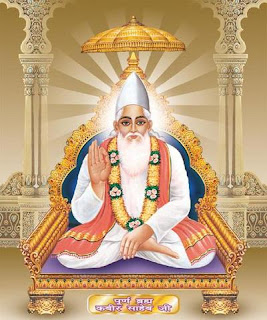 My beloved gave me a veil--
who could wear it but the one he loves?
This veil is eight hands long
and the fabric dyed with five colors.

The moon and the sun shine on the border
Filling it with sparkling light.
This veil was made without a loom,
Kabir gives it glory above all.

Dwivedi interprets the veil as bhakti, which he says is a causeless gift from God. He quotes the famous Upanishadic verse—

The Self cannot be attained through learned discourses
Nor through intelligence, nor through long study.
The Self is attainable to the one He chooses.
To him, the Self reveals His own form.

Kabir's poem is full of allusions. Dwivedi identifies the eight hands as the eight periods of the day ("Time"). He interprets the five colors as the “pancha tattva,” though unfortunately he is obscure about which set of five tattvas he thinks it means (most likely the five great elements). This is sandhya bhasha, and I cannot say whether he has received his info from a genuine tradition or not.

It seems more likely that the meaning is "body." Another Kabir song with a veil in it--

My Love, my veil is stained.
Made from the elements five,
Absorbed in sixteen hundred sensory traps,
The veil that came from my parental home
Lost its luster in my in-laws’ house.
I wash it over and over, yet the stain goes not!
My Love, bring the soap of knowledge.
Says Kabir: These stains will eventually leave
When my Love makes me his own.

Strange though it appears, in this love song, Kabir the weaver, uses the word Chunri (Veil) deftly to unveil the misperception of "truth" as an identification with one's body rather than with the invariant "Self." Perhaps rightly so, as the "Self" cannot get tainted! The love song seems to be indicative of a complete union towards oneness by which one transcends the merely sensual existence to one that is universal. The latter to me personally makes more sense as an absolute union or Samadhi is possible only when the mind becomes focused on a single idea, the idea that there is none other than the Self." (This comment from Kabir love songs)

He decides here to make a point not really found in Kabir’s song, nor apparently in any Kabir song, because he has to use the above Rabindranath poem to make it. He says that though God makes the gift of the “shringar” veil of bhakti, it is not “light” or “soft,” but comes with a heavy burden of responsibility. So he takes the feminine symbol and turns it into a masculine one, which seems unjustifiable, at least from the point of strict adherence to the interpretation of Kabir.